The billion-dollar battle over premenstrual disorder 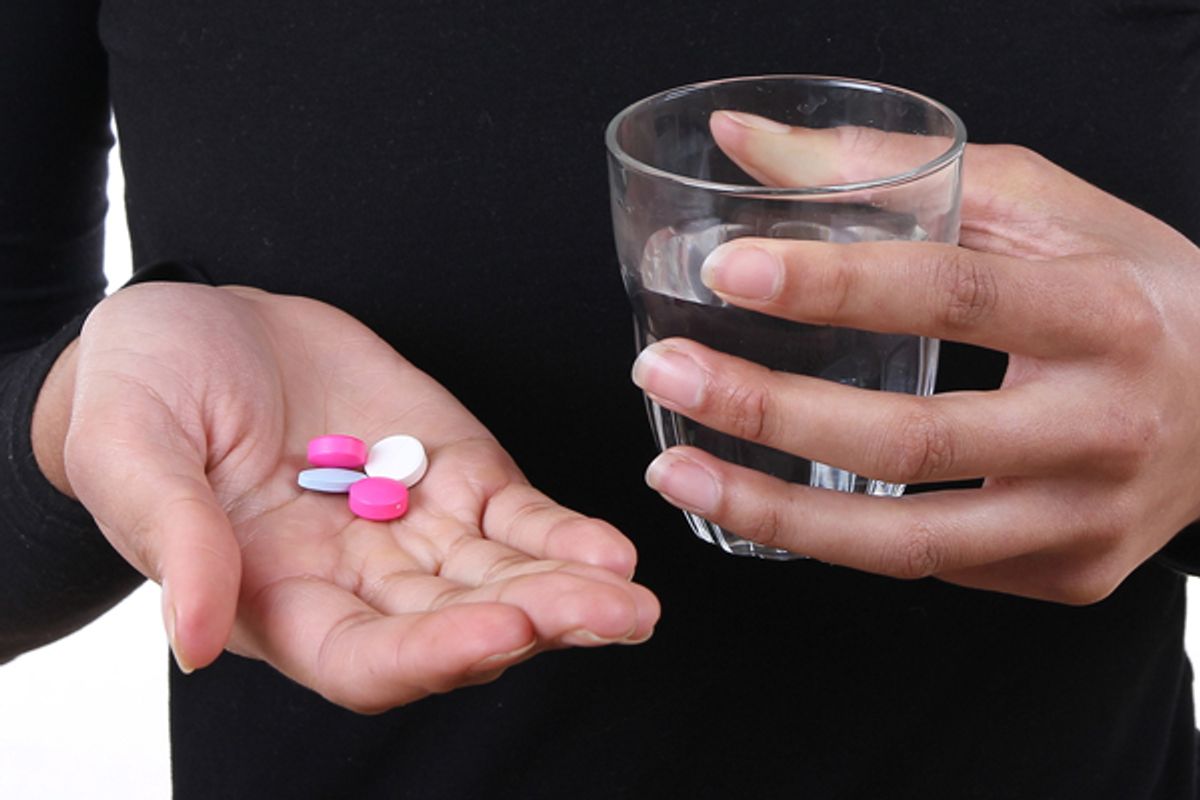 For about five to seven days of every month, a woman may as feel as though she were a different person. A person she doesn’t like. Things come out of her mouth that she normally wouldn’t say, cruel things, directed at the people she loves. A soundtrack of self-loathing thoughts loop in her head. Any rejection during this period has the ability to wreak fearsome terror on her psyche. She may have sudden outbursts of sobbing, overwhelming sadness or an oceanic feeling of anxiety. One woman described the several-day sensation as though she were “being forcibly held underwater” -- and every time she came up for air, a “boot was pushing” her back down. Then, suddenly, the melancholic fog lifts, the fatigue evaporates and she is herself again. All because she got her period.

Doctors and psychiatrists at work on the newest version of the Diagnostic Manual of Mental Disorders -- the American Psychiatric Association's bible for mental-health professionals -- describe this confluence of symptoms as Premenstrual Dysphoric Disorder (PMDD). The revised version of the DSM, just the fourth new edition in 52 years, will be published next year.

Since 1987, PMDD has lingered in the ghetto of the DSM: the appendix pages where proposed diagnoses are deemed in need of “further study.” But right now, it appears as though PMDD will ascend in the ranks from a hypothetical ailment to illness to become a full-blown depressive disorder; taking a place alongside Major Depression and Bi-Polar Depression. The upgrade in status -- which will be determined in the next several months -- has become the latest flash point in an ongoing controversy between psychiatrists, academics, activists, pharmaceutical giants and women who insist they suffer from the disease, as well as doctors and women who refute the existence of PMDD all together.

PMDD is not just PMS, says Dr. Kimberly Yonkers, a professor at the Yale School of Medicine and Psychiatry. "It's more complicated than that," she says. “It involves emotional symptoms ... Women with PMDD have significant impairment," she adds, that can interfere with going to work, school or being able to participate in a household.

Yonkers is a champion of PMDD research, and she also sits on the committee that will either greenlight or ax PMDD’s placement in the DSM.

It's important because the DSM remains the medical doctrine that separates the sad from clinically depressed, the neurotics from the normals and, potentially, the bloated from those with a mood disorder. Besides practitioners and patients, another huge stakeholder in the debate is pharmaceutical companies. When a new diagnosis makes its way into the book, drug companies such as Pfizer and Eli Lilly set off to manufacture a drug to alleviate the symptoms. Or in the case of PMDD, they can just rebrand an old drug to do new tricks.

So what is PMDD? The current criteria being proposed for PMDD includes mood swings, marked irritability or anger or increased interpersonal conflicts, feelings of hopelessness, marked anxiety and decreased interest in usual activities. Also: a subjective sense of difficulty in concentration, lethargy, a marked change in appetite, insomnia, a subjective sense of being overwhelmed and other physical symptoms such as breast tenderness or swelling, joint or muscle pain, a sensation of “bloating,” weight gain.

Those physical ailments are the most controversial of the new proposed criteria. Some argue this would shove physiological or gynecological issues into the psychiatric realm, scrambling a mind and body separation that keeps mental health issues discreet  from physiological ones. If the newest proposal makes it into the DSM a woman will need to have had five of the symptoms during the past year, including the physical ones.

The debate has created unlikely allies. Pharmaceutical companies are eager to provide new drugs to treat PMDD. In 1999, the year Prozac was set to expire, Eli Lilly, the manufacturer of Prozac, went to the Food and Drug Administration to seek approval for Prozac as a treatment for PMDD.

The FDA approved the patent extension (in contrast, the European counterpart to the FDA found there was not enough research to establish PMDD as a medical diagnosis because of fuzzy criteria and shoddy self-reporting on behalf of women who had to track their daily moods for two months straight). It is the only time the FDA has approved treatment for a diagnosis that has not been recognized by the American Psychiatric Association. Eli Lilly then repackaged Prozac as pink and purple gel capsules and rechristened it Sarafem.

This matters because once a patent expires, a doctor can write a prescription for Prozac and the patient can get a cheaper generic brand. However, in the case of a patent extension to treat a new specific illness, there is no generic option. So when a woman gets a prescription for Sarafem, she can only get Sarafem.

Sarafem ran advertisements directly to consumers on TV and in women’s magazines. One ad featured an ordinary-looking woman in plain clothes angrily trying to pull a grocery cart from a row. The tag line read: “Think it’s PMS? Think again … It could be PMDD.”  In the first six months Lilly reported $19 million in Sarafem prescriptions. By 2001, it had raked in $85 million, then sold the patent to Galen pharmaceutical company for $259 million.

PMDD skeptics argue that this debate is about selling drugs, not science.

“PMDD is an invented ‘mental illness,’” argues Dr. Paula J. Caplan, a research associate at the Du Bois Institute at Harvard University, and author of "They Say You're Crazy: How the World's Most Powerful Psychiatrists Decide Who's Normal."

Caplan, who chaired a DSM work committee during its fourth revision, said she was appalled not only by the aggressive lobbying done by Eli Lilly to push PMDD through the committee, but also how much hard cash the company put into the research and trial groups. Caplan and others contend that PMDD has too much overlap with other mood disorders, such as depression. Creating a new diagnosis, they fear, would mostly benefit big pharma and not suffering women. Caplan argues that women “learn to pathologize themselves, often ignoring the real causes of their upset,” such as a failing relationship, a history of abuse or depression.

Additionally, critics of PMDD believe that the diagnosis is just another way to medicalize the female experience. PMDD, it’s argued, plays into ancient notions of women as overly emotional and unpredictable and needing to be contained by forces other than themselves. From puberty to PMS to PMDD to pregnancy to postpartum depression to menopause, opponents argue that throughout history there has been a one-sided conversation between doctors and women about the female body.

Indeed, public medical authority on women’s health does not have a sterling track record. In the 1800s, when issues surrounding the luteal phase (the week before menses begin) of a woman’s menstrual cycle began to be documented, there’s been a ridiculous parade of treatments. Dr. William DeWees of University of Pennsylvania coined the expression “melancholies of menstruation" in 1843 and promoted the idea “that the uterus exerts a power over every body system.”

Through the 1900s, psychoanalysis became the main treatment for women who felt not only emotional distress but physical symptoms, such as breast tenderness, bloating, food cravings and headaches during their luteal phase. In 1931, Dr. Robert Frank championed medicinal treatments for women who suffered from what he called premenstrual tension and for the next 50 years women who sought treatment for pain and distress during their luteal phase were given diuretics, saline cathartics, caffeine, calcium, Vitamin B, antispasmodics, laxatives, enemas, alcohol tonics, and in severe cases hysterectomies.  Now the cure being proposed is antidepressants. Other psychotropic drugs such as Zoloft and Paxil have also gained approval by the FDA to treat the symptoms of PMDD.

In a 1997 study of 200-plus women who were diagnosed with PMDD, conducted by Yonkers, 60 percent of women said their symptoms improved when they were given the antidepressant Zoloft. This raises an obvious question: What if these women were just depressed already?

Caplan argues that women who self-diagnosis themselves as having bad PMS or PMDD are suffering from depression for internal or external reasons, not because their menstrual cycle is wonky. In an article from the Journal of Women and Therapy, Caplan cited the experiences of an obstetrician who treated women who complained of severe PMS :

Ian Tummon an obstetrician-gynecologist who has suggested  (Tummon & Kramer, 1994) that even the term “PMS” no longer be used, reported that when his women patients begin an office visit by saying, “Doctor, I have terrible PMS,” they never again mention PMS during the rest of the session. Instead, he wrote, they spend the whole time talking about the way their husbands abuse them or about their 14-year-old children who won’t come home at night. To label these women mentally disordered – and send the message that their problems are individual, psychological ones – hides the real, external sources of their trouble.

Then what to do with a problem like Elise? Elise is a graduate student, petite, blond, with a Brigitte Bardot pout. She has never been abused. Has thrived in a healthy relationship with a female partner. Doesn’t have kids or a household to manage. Yet for years, she was incapacitated for at least seven days out of the month.

“Right before my period I would get incredible fatigue and cramps that would cripple me," she says. “I guess I wasn’t myself, because ‘myself’ isn’t usually in such terrible discomfort. So yeah, of course, I’m more irritable and easily overwhelmed.”

Elise was diagnosed with a mood disorder before she sought treatment for her menstrual distress. She takes Zoloft for her moods and birth control for her periods. She skips the row of sugar pills every month on her birth control packet, meaning she doesn’t get her period at all now. “Breast cancer runs in my family, and taking the birth control I’m on ups my rate for breast cancer but it’s a risk I have to take. Otherwise I’m essentially an invalid for seven to 10 days. For Elise, all the solutions have seemed imperfect.

Those in favor of PMDD being absorbed into the mood-disorder section of the DSM argue that the mood swings and irritability and depressive symptoms amount to a separate diagnosis from regular depression because it is linked to the menstrual cycle and only appears days before the uterine lining is shed and disappears days afterward. “The timing is exquisite,” says Dr. Jean Endicott, professor of clinical psychology at Columbia University's College of Physicians and Surgeons. Endicott also worked with Yonkers on the 1997 study.

If PMDD were to make it into the DSM, it’s possible that women could have a bona fide medical excuse for missing work or school during those days. Women need to report distress, not just discomfort, to their doctors to be diagnosed under the proposed criteria. The treatment regime as it exists now is antidepressants, not pain killers, anti-psychotics or tranquilizers.

Historically, differences in the sexes have been used as a tool of oppression, there is no doubt of that. However, what if there is a difference between men and women when it comes to the way hormones affect their moods and bodies? Even if women are the only ones who can get diagnosed with PMDD, even if people call it sexist, does that make it less real?

“One of the things I find frustrating about modern feminist critique,” Elise says, “is that I’m expected to be tough no matter what my body deals me, otherwise I’m giving in to patriarchy. What if sometimes, I’m in pain and I can’t do it on my own. What has to happen to make that acceptable?"