A new generation turns to the video-sharing site to talk about treatments and experiences, and build a community 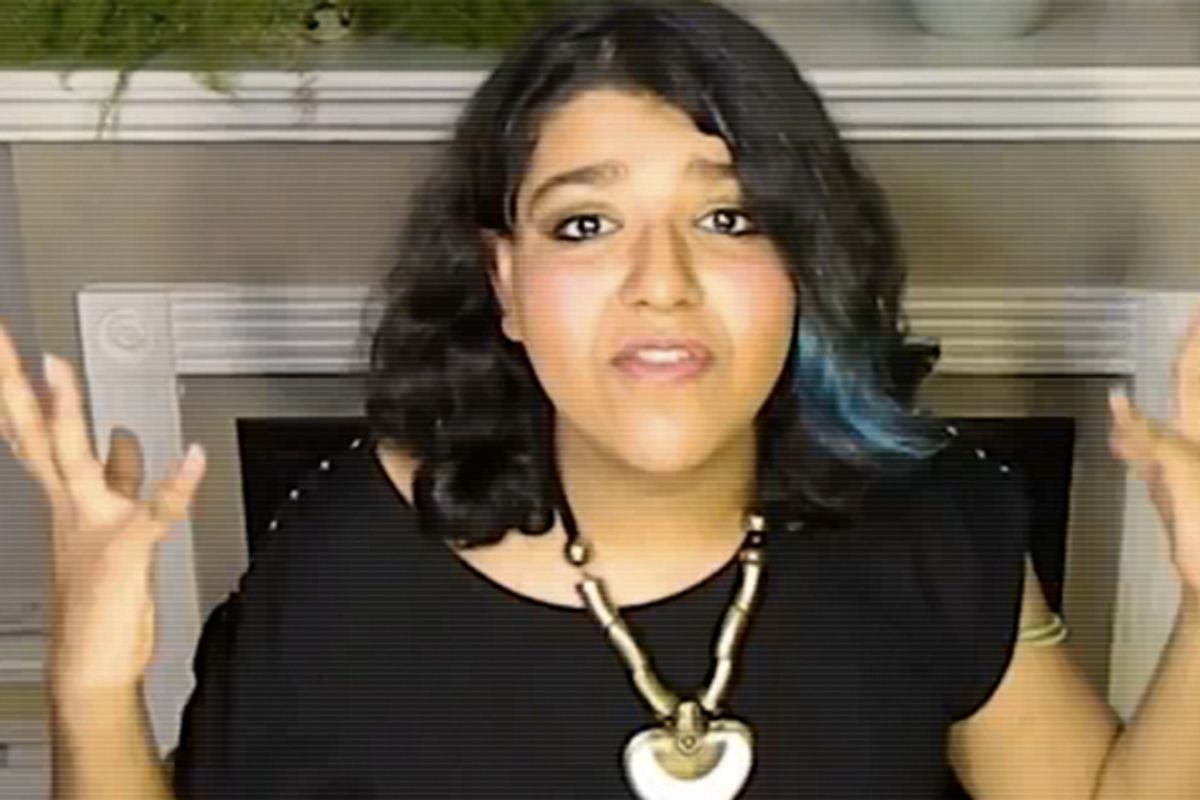 Jazmine Khan, a transgender 15-year-old with wisps of blue hair and nails to match, is crying in her doctor's office. "I just wish I was me already," she says to the camera held out in front of her, and wipes away tears with her free hand. "I just wish that I could be a real girl."

Moments ago, her doctor told her that she won't be allowed to start taking estrogen to aid her full transition -- not for a long while. That means it's time for yet another shot of Lupron, a drug that suppresses testosterone production. The Canadian teen has videotaped each of her six shots thus far -- along with updates on the changes brought about by the drug -- and posted them on YouTube for the world to see.

This particular video marks a low point after a particularly difficult visit: First, her mom referred to her as a "he," then a nurse did the same. When she finally got to see her doctor, her hopes of moving on to estrogen treatment were dashed. "It's too slow," she tells the camera, angry with her doctor's caution. "They gotta make sure I'm trans? Of course I'm trans. Who in their right mind would go through this [otherwise]?"

I found Jazmine after reading an Associated Press article earlier this week on new research finding that a growing number of minors are undergoing "sex-changing treatments." Some 14 paragraphs in, a researcher attributed the increase to awareness brought about by media attention -- and YouTube.

Associating YouTube with time-lapses of pregnancies and beard growth -- not to mention the year 2006 -- I had to check this out for myself. Sure enough, I found scores of teens and young adults who have taken to the site to document their experience on so-called "puberty blocking" drugs like Lupron, or with hormone replacement therapy.

Some have even posted compilation clips that mimic the aforementioned time-lapse videos -- only they show a gendered transformation. In the case of trans women, things seem to soften -- the face, the voice, the five o'clock shadow. Depending on the treatment, sometimes breast tissue develops. With trans men, the opposite happens: The voice deepens, facial hair sprouts. Chest binding or surgery make breasts disappear. Just as with those YouTube pregnancy videos, these compilations reveal the spectacular adaptability of the human body.

But they also do something much more important. Jazmine says her goal is to "to help the next generation of gender binary nonconforming people be themselves and be free." Her monthly videos of her Lupron shots prep other trans girls for what's in store with the treatment -- the size of the needle, the burning sensation. She posts videos that detail the progress (like less facial hair) and side effects (acne, weight gain, testicles "shrivel[ing] up") that she's experiencing throughout the process.

The same is true of many videos posted by trans guys. After just a week on testosterone, 18-year-old Layne complains, "My voice is really temperamental ... it's been starting to crack." Three months later, he's struggling with bad acne. At the five-month mark, he gets in front of the camera in his underwear and crows, "Ooh, look at all the under-thigh hair!" He reaches for his foot and goes, "I'm getting little beards for my toes." In terms of "genital growth," he says his clitoris "really is starting to be shaped more like a penis would be," and says, "I've been pretty horny lately." At the nine-month mark, his voice is remarkably lower and no longer cracking.

They're like video tours of delayed, or do-over, puberty -- and they can come as a huge comfort to those contemplating hormone treatment.

"YouTube was an enormous help in my transition," says Sam, a 24-year-old trans man living in Brooklyn, N.Y. "I really had no idea that transitioning was an option until I saw other trans men on YouTube." Sam, a muay thai boxer, says he started his own YouTube channel to document his experience with taking testosterone "as a way of giving back." He explains, "I took so much from viewing videos that I wanted to do the same for others."

Natalie, a 17-year-old trans girl living in Syracuse, N.Y., tells me, "YouTube was a huge part of my journey." She ordered hormones online from overseas without her mom's knowledge. "I started by watching other people's videos, and identifying with people through their videos in a way I wasn't able to do in my small city I grew up in." When she started posting videos herself, she got support from her viewers.

Jazmine had a similar experience. "When I was just coming out as transgender, I needed somewhere to show me that being me is OK, and that being different is a good thing," she says. And she really needed that support: Before realizing that she was trans, she came out as a gay male two years ago, and that led to fights that ended with the police removing her from her parents' home. "After 14 months of safe houses, foster homes and group homes, I moved back in with my mom to a new house, in a new city, without a father," she says. Now things are much more stable, but she says, "I found that YouTube was really where I belonged, and that the Internet will always be my home."

Whether it's through making a video or watching a video, she says, it makes her "feel good on the inside knowing that there is someone out there just like me."

Beyond the medical fact sharing and sense of community, there's a general message of hope, similar to the "It Gets Better" videos. Carla Lewis, a 40-year-old trans woman who posted a video of her decades-long transformation, titled "3 Minute Bio (M2F Transition)," says she wants trans kids to know that "you can go from a male all-American young veteran from a small town to a female business owner and community leader." She says of her compilation video, "I want people that watch that video, in particular, to know that you can have happiness -- and isn't that really all anyone wants?"

Of course, these videos don't just speak to the trans community -- there is also the goal to "raise awareness" on a much larger scale, says Jazmine. The "about" section on her YouTube profile reads, "Just Your Neighborly Transgender Girl Ready To Take Over The World ... "