The subterranean politics of war and peace in Gaza 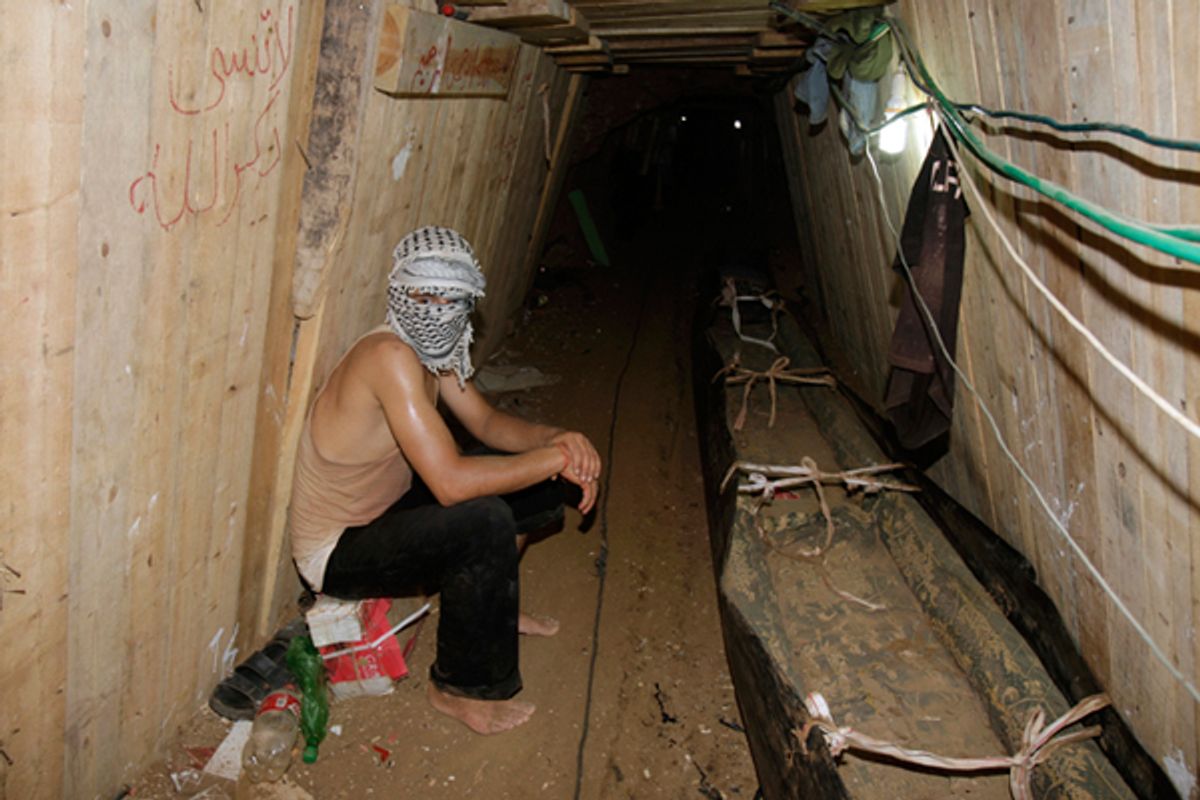 A Palestinian sits in a smuggling tunnel beneath the Egyptian-Gaza border in Rafah. (Reuters//Ibraheem Abu Mustafa)
--

RAFAH, Gaza Strip -- The first things you notice are the trucks, entering Rafah’s dusty main thoroughfare from small side streets, flatbeds fully loaded and covered. Then there are the young boys packed three to a motorbike, darting heedlessly in between the rumbling behemoths, clutching shovels. As you get closer, you see the enormous mounds of earth and rubble, some 10 feet high and more, set amid acres of makeshift canopies, tents and metal garages, which serve as loading docks for Rafah’s booming tunnel trade.

This underground entrepot is now another front in the multifaceted Israeli-Palestinian conflict.  After years of virtual – and sometimes actual -- civil war, the Palestinian factions Hamas and Fatah have gotten more serious about reconciling and forming a united front, ostensibly to better achieve Palestinian national goals, more immediately to stem growing popular discontent at the abject failure of either party to do so. Yet the unity talks have also exposed a division between Hamas’ external leadership, represented by Khaled Meshaal, and the Gaza-based leadership, represented by current Prime Minister Ismail Haniyeh.  When Meshal and Palestinian President Mahmoud Abbas of Fatah announced the outlines of a deal (one that would make Abbas both president and prime minister of a unity government) in Qatar  earlier this month, the Hamas leadership in Gaza strongly criticized it, saying they hadn’t been sufficiently consulted.

While tensions between the various factions within Hamas have long been rumored, until now the organization has been fairly good at managing such tensions in private. What explains the Gaza wing’s decision to so publicly disagree with its external leadership? The Rafah tunnel trade -- and the considerable amount of revenue (estimates range as high as $20 million per month) that the Gaza Hamas wing derives from it -- offers a clue as to why.

How the tunnels grew

The Rafah tunnels have an ancient heritage.  Mentioned in official documents as far back as 1303 BC, Rafah was an important trading center for centuries, serving as an entryway between North Africa and the Levant. After falling into decline in the Ottoman era, the town swelled in size with the influx of refugees fleeing from the war between Israel and the Arab states in 1948, after which Gaza was occupied by Egypt. After the 1967 war, the Gaza Strip came under Israeli control. The town was divided between Egypt and Israel in the Camp David Accord, which created a buffer zone between Egypt and Israeli-controlled Gaza known as the “Philadelphi corridor,” and the tunnels soon began to spring up, primarily for the transfer of drugs and other contraband, but also for other goods not easily available under Israeli occupation.

With the coming of the Second Intifada in 2000, the tunnels increasingly began to be used by violent factions like Hamas and Palestinian Islamic Jihad to smuggle weapons and explosives for attacks on Israeli civilians, a problem Israel attempted to deal with by destroying homes and buildings suspected of covering tunnels. In 2003, American activist Rachel Corrie was killed by an Israeli bulldozer as she attempted to prevent it from demolishing a Palestinian house in Rafah.

Following Israel’s 2005 withdrawal of its settlements from Gaza, which is home to 1.7 million Palestinians, the Rafah crossing came under the control of the Palestinian Authority, though according to both the United Nations and the U.S. State Department, Israel retains responsibilities as an occupying power. In response to Hamas’ 2006 capture of Israeli soldier Gilad Shalit, Israel enacted a strict closure on Gaza.

In 2007, Hamas took over Gaza in a short but extremely violent war with its rival, the secular nationalist Fatah, which continues to rule in the West Bank. Israel tightened its closure even more, allowing the entry only of goods “vital for the survival of the civilian population,” banning exports, and prohibiting Palestinians themselves from leaving the Gaza Strip in all but the most exceptional cases. In response, the tunnel business took off.

Under Hosni Mubarak, Egypt helped enforce the official blockade on Gaza, periodically cracking down on the tunnels, which invariably sprang back up. In May 2011, after the fall of Mubarak, in an effort to placate popular opinion, the Egypt’s transitional military government opened the Rafah crossing to Palestinians. It remains closed to materials. “Egypt is OK with it,” said Taghreed El-Khodary, a Gaza-based journalist and former New York Times correspondent. “They can’t push too hard, even during Mubarak’s time they couldn’t push too hard during the siege, and they are making money from it.”

“Prior to 2007, the tunnels functioned to smuggle contraband into Gaza, cash, weapons, and drugs,” said Sari Bashi, the executive director for Gisha, an Israeli human rights group that advocates for the freedom of movement of Gaza’s residents. “The tunnels were defined as a security issue, and Israel cracked down with little success. Beginning in 2007, Israel began restricting civilian goods, and the response was flourishing of the tunnels, on which civilians in Gaza now depend.” (In a recent report, “Scale of Control,” Gisha argued in favor of Israel’s continuing responsibility for Gaza, based on the considerable extent of Israel’s continued control of the lives of its residents.)

Based on what I’d seen reported on the tunnels before, I was expecting to see camouflaged holes in the ground guarded by guys with guns. While those smaller ones continue to exist (“There are tunnels even Hamas doesn’t know about,” one observer told me), the ones I saw were housed under tents and garages, out in the open, with trucks backing right up to them to load. The tunnels varied in size. One was a tight space reminiscent of “The Great Escape,” reinforced with scrounged plywood and not big enough to stand up in, while another had walls and ceiling reinforced with steel beams and concrete, thoughtfully decorated here and there with artificial leaves. Both used truck engine-powered pulley systems to draw sleds-full of materials the few kilometers from Egypt. Rumor has it that some tunnels are even big enough to bring cars through, and have done so.

For something that is thoroughly illegal, I was surprised at the openness of the activity. A proud worker even invited me to snap a photo of the tunnel he was currently digging. One doesn’t commit this much time, energy and resources to such an enterprise if one isn’t reasonably sure about the safety of such investment. The tunnels now represent the cutting edge of entrepreneurship in Gaza. There are estimated to be over 1,000 of them operating now in Rafah.

“The policy of civilian restrictions is what has made the tunnels basically impossible to close,” said Bashi. The tunnels also provided a source of tax revenue for the Hamas government. “Israel banned construction materials, so the Hamas government has been bringing them in through tunnels and levying taxes and operating fees. Prior to the ban the [Ramallah-based] Palestinian Authority was benefiting from the taxes, and the providers were Israeli and Palestinian business people.” Now, she said, that money goes to Hamas. “Israel, through its restrictions, has created a flourishing black market economy, and a new class of entrepreneurs, at the expense of the Gaza’s traditional business community.”

A couple of Gaza businessmen with whom I spoke confirmed this.

“I want to do business with my friend at General Electric in Tel Aviv,” not with the “gangsters” who run the tunnels, said one. Another, an Internet technology entrepreneur, noted that a Dell laptop computer was far cheaper from the tunnels than bought legally through the Israeli-controlled Kerem Shalom crossing, which put him in a tough spot as someone trying to run a business both legally and profitably.

“Once you have a tunnel you have to pay fees, and that goes to the municipality, which provides you electricity” for the tunnel, said El-Khodary. “Then you pay taxes on the goods you bring out. Whether it's oranges or cement, Hamas gets its tax.” The continuing closure combined with the tunnel economy puts Hamas in a comfortable spot: They can blame the continuing Israeli blockade for their own failures of governance, while using the tunnel revenue to distribute patronage and maintain favor with key constituencies in the Gaza Strip.

Egypt looks the other way

On the Egyptian side of the border, there’s no apparent enthusiasm for cracking down on the tunnels trade.

“There’s little Army presence, much of this area is Bedouin controlled, and it’s pretty much isolated from the central government in Cairo,” said El-Khodary. “Many Egyptians in Rafah will talk about how isolated they are, but if you go to El Arish,” a coastal city about 50 kilometers west of Rafah, “you see people making a hell of a lot of money out of the tunnels. There’s no way they’re going to let them go.”

Israel’s security concerns over threats emanating from Gaza are quite legitimate. Materials smuggled through the tunnels have been used to manufacture rockets and mortars launched against towns in Israel like nearby Sderot, and there are fears that the range of these weapons is increasing.

The result of the  policy of closure, however, has been the development of a sizable black market economy based upon illegal tunnel trade. This has been accompanied by the growth of influential constituencies in both Egypt and Gaza that oppose any effort to shut down the tunnels, and will lobby hard against  the creation of a more open, regulated border. By empowering a large new merchant class that profits from the tunnels, the closure policy has effectively created another stumbling block to normalization of relations between Israel and the Palestinians.

To repeat, the tunnels have also created a welcome source of tax revenue for the Hamas-controlled Gaza government that has both helped them to resist the impact of the closure and empowered them to challenge their external leadership when it commits to things they don’t agree with.

Hamas’ external leadership is in a more accommodating mood. In reaction to Bashar al-Assad’s brutal crackdown, they have left Damascus, and are looking for a new home and new patrons. The Gaza leadership, on the other hand, feels more secure.  Having borne the brunt of the Israel’s operation Cast Lead in 2008-2009, and feeling the wind of the Arab awakening at their back, they also seem to feel far more justified in asserting themselves against such accommodation. And skimming the cream off the tunnel trade gives them a source of revenue that makes governing easier.

In short, a policy whose ostensible goal was to weaken Hamas’ hold on Gaza has apparently strengthened it.

The closure policy has hollowed out the sectors of Gaza society with ties to Israel and the West Bank, and thus isolated those with a greater interest in a two-state solution. The policy has also empowered those with ties to Hamas and to organized crime. “If I were to write a strategic plan on how to strengthen the Hamas government,” Bashi said, “I would suggest everything Israel has done over the last four years.