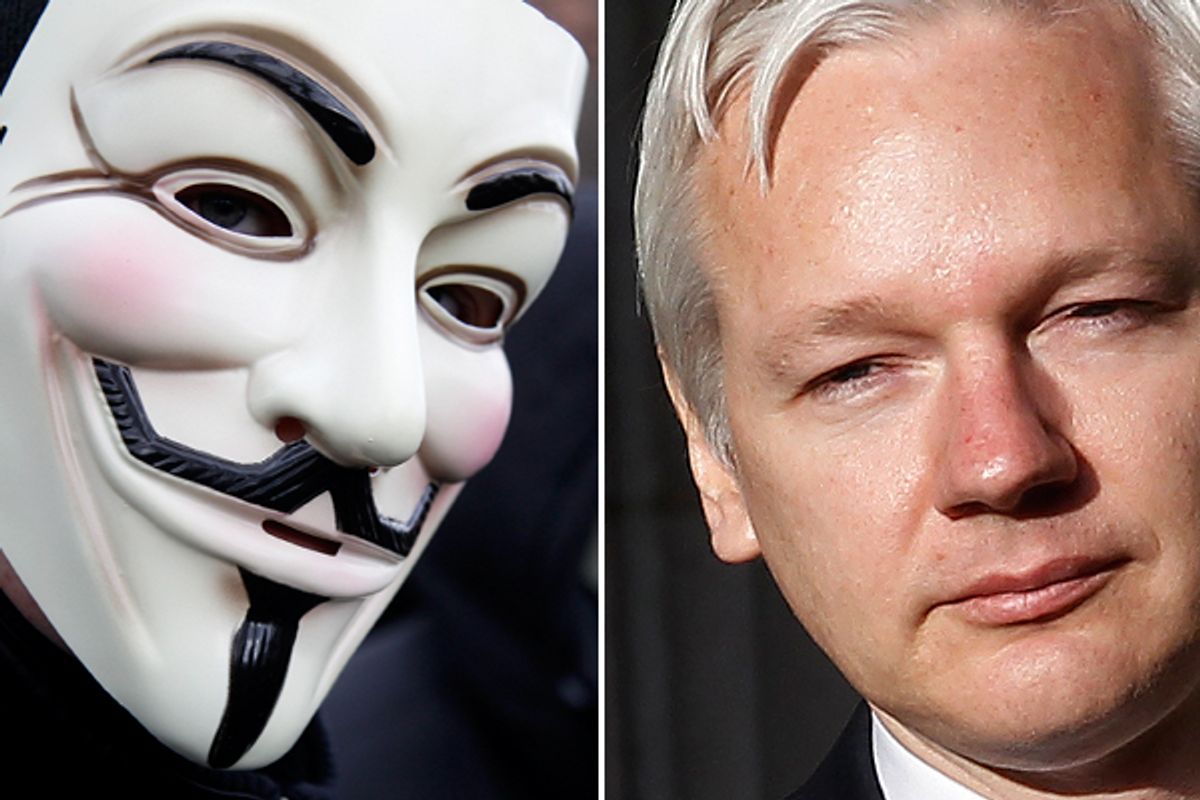 Today has been a very big day for WikiLeaks. It just released 5 million internal documents stolen from the private intelligence firm Stratfor, allegedly obtained by hacktivist collective Anonymous in December. This is huge; it's the first time Anonymous has ever cooperated with an aboveground entity, lending an unprecedented amount of political legitimacy to the often inscrutable group. But why? What do these strange bedfellows have to gain from collaboration? With this new collaboration, Anonymous has obtained new credibility, and WikiLeaks has obtained a hugely valuable new source. This potentially powerful alliance could point to the future of the leak economy, and this awkward symbiosis provides each party with exactly what they need to move forward. A new age of transparency activism may have just begun.

In the past, Julian Assange and other spokespeople at WikiLeaks have subtly distanced themselves from Anonymous as though it were an annoying little brother. WikiLeaks at least tries to operate within various global laws and seems to want nothing to do with a brand of hacktivism that's also responsible for flooding Facebook with violent hardcore pornography, among other unsavory activities.

But this move comes at a good time for WikiLeaks. The organization has been brought to the brink of collapse over the last year due to internal strife and ever-rising legal bills. More broadly, WikiLeaks is a problematic system for acquiring and publishing leaks. It's vulnerable to attacks from many sides: "patriotic" rival hackers and terrorists, legal attacks from governments, militaries and corporations. Perhaps worst of all, it has promoted the celebrity of its leader, Julian Assange, to the point where the focus of the media is no longer on the leaks themselves, but on the dramatic narrative of the organization's most famous face.

WikiLeaks' early success relied not on its ability to disseminate sensitive information, but from the lucky break it got in Bradley Manning, a U.S. military insider who could just as easily have directly leaked his info anonymously from a random Internet cafe. The ostensible value WikiLeaks provided to Manning was legal defense. And has it failed epically on that front. To put it bluntly, WikiLeaks is in crisis, and perhaps the only thing that can save it is a fresh, steady source of new leaks.

Meanwhile, Anonymous has risen from the sludge of geeky Web culture, first conceived as a catch-all term for online trolls who engaged in indiscriminate acts of online harassment, sometimes funny and sometimes horrific. Toward the end of 2007, a few of them realized that their ability to harness the power of thousands of bored geeks from across the globe would be put to better use against a perceived entrenched evil: the Church of Scientology. From there, Anonymous exploded into the mainstream media with physical protests and the now-ubiquitous Guy Fawkes mask. In December 2010, Anonymous targeted PayPal, Visa and Mastercard for refusing to process donations to WikiLeaks, bringing the websites of all three offline during Operation Payback. From there, the list of targets expanded to security contractors, media outlets, video game platforms and more. They've  successfully attacked dozens of targets, some of which are multinational corporations and government contractors.

Over the last six months, the Anonymous brand has been stretched to cover every possible countercultural endeavor. If it were a commercial brand, analysts would call this process a dilution of brand equity. Given the nebulous nature of Anonymous' membership and leadership, if one can even use those words to describe the group, Anonymous has come to mean many things to many people. For some, it's about attacking the Church of Scientology. For others, it's a tool of the 99 percent. Others still would prefer that the group return to its trollish roots, terrorizing bratty 11-year-old girls on YouTube.

Meanwhile,  the media has reported a new Anonymous threat every few days, many of which never seem to come to fruition. When Anonymous claimed that it was going to "kill" Facebook and "erase" the NYSE from the Internet last fall, those threats were published by mainstream media outlets as though a world leader had declared war on a neighboring country.  And then came the retractions, the caveats, the general backpedaling. As it turned out, any member of Anonymous can whip up one of these creepy YouTube calls to action with the free moviemaking software that comes with your average home computer. Journalists realized that they couldn't go around reporting every idle threat that popped up on Twitter, which has cost Anonymous much of its credibility.

Today, the media is significantly more hesitant to publish scoops that deal with Anonymous activity. Unless a journalist is willing to deeply embed herself into the underground culture of Anonymous (a process that would take months of serious research and relationship building), she really has no way of confirming the validity of any Anonymous attack until it's been reported by the victim. On the other side, Anonymous has the opportunity to become a powerful publicity machine for activist causes, simply because the media is hungry to cover legitimate attacks. The group is perhaps more adept at "hacking" the media, generating a ton of interest around a specific issue, than pulling off actual network intrusions.

Which is why Anonymous's latest "partnership" with WikiLeaks makes so much sense. Anonymous can get the goods for WikiLeaks because, cloaked by anonymity, it is willing and able to operate outside the law. Meanwhile, WikiLeaks provides  Anonymous with a powerful P.R. channel. The media trusts WikiLeaks. It has a mailing address and an official spokesman. It's able to add a layer of credibility to any leak it publishes because it employs a paid staff.

WikiLeaks and Anonymous could prove to be powerful allies in their shared war against government and corporate corruption. WikiLeaks is desperately dependent on new leaks, and Anonymous is happy to oblige, with a new commitment to regularly scheduled hacks. A newly energized WikiLeaks is positioned to provide analytical resources to the leaks Anonymous uncovers so that they can be parsed in a thoughtful way for easy media consumption.

As much as Anonymous tries to present itself to the media as a legitimate source of leaked information, it's always going to be doing so shoes untied, shirt untucked and fly down. Anonymous could just as easily dump 5GB of sensitive information onto a site like Pastebin, which hosts millions of anonymous text uploads, but in 2012, reporters are much less likely to find them, let alone trust them. For now, they need WikiLeaks as an intermediary, an older brother to tell Mom, "He's telling the truth this time, I saw the whole thing -- promise. "

It remains to be seen if the leaked Stratfor emails will contain anything worth talking about. WikiLeaks will likely continue to distance itself from Anonymous, at least publicly, since any sociopath can claim to represent the group, Anonymous is too unpredictable, and WikiLeaks can't handle any more bad press. If it's working closely with Anonymous, WikiLeaks is going to downplay the relationship as much as possible to protect itself. Still, depending on Anonymous' ability to dig up future dirt, the collaboration might represent a way forward for both entities.

Cole Stryker is the author of "Epic Win for Anonymous" and is currently working on a book about anonymous activism and online privacy, due for a fall release from Overlook Press