Parenting secrets of a college professor

On campus, I see the damage that anxious overparenting has created. So, in my home, I\'m trying something different 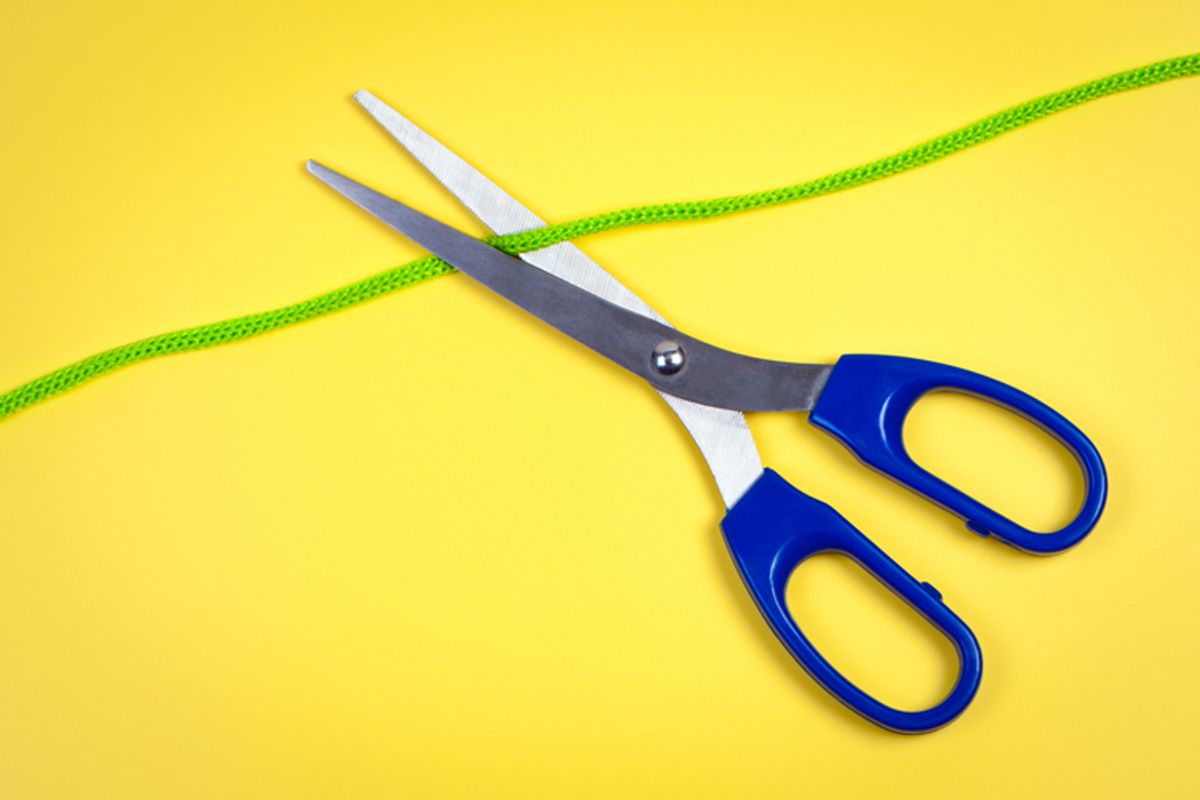 My 20-year old daughter, Allison, who has her own apartment in Philadelphia, sent me a text the other day:  “I need socks and dandruff shampoo.” I laughed aloud and texted back, “I need deodorant and coffee filters.”

I had a fleeting thought that she was actually asking me to pick up those items for her, but I preferred to think we were playing a cellphone game. I try not to be a helicopter parent. Experience as a mother and professor has taught me how badly that can backfire.

Instead, I prefer a more hands-off approach, which came naturally. From the time Allison turned 18 something kicked in, and I simply no longer had any desire to know her work schedule or pick up her tampons. I remember wondering if this was as instinctual as nursing her or bundling her up when she was a baby.  But that's not what I see at Drexel University, where I teach and where my daughters go to school. The vast majority of my students talk to their parents three times a day or more. One student's mother called when she didn’t hear from him for a few days. He picked up the phone, but he was in the library and so he whispered “hello.” She accused him of being hung over or drunk, even though it was about 10 a.m. on a Tuesday.  He tried to convince her, avoiding eye contact with those library patrons giving him exasperated looks, but she insisted that he take a picture of himself, in the library, holding a newspaper with that day’s date, and send it to her. I cannot shake how similar that is to a hostage situation.

As a professor, I’ve always treated my students as autonomous beings, telling them on the first day of class that I will not follow up with them on missed classes or assignments as other instructors might. It’s my tough love way of getting them to become independent thinkers and to do for themselves.

But I can't help contrasting that to the way their parents treat them. In Allison's senior year of high school, parents rolled their eyes over filling out their sons’ and daughters’ college applications, expecting commiseration from me. I smiled and nodded and hoped my face didn’t show the absolute incredulity I felt. Didn't they see the disservice they were doing their children? Two years later when my daughter Hayley graduated, the situation was worse. Parents would use the word “we” -- as in, “We’re looking at Rutgers,” or “We’re thinking he should take a year at community college until we figure out what he should focus on.” My parents didn’t see my college campus until they came to visit. My roommate and I drove ourselves to orientation, and we still laugh remembering how we ended up a state further south, forced to ask a toothless gas station attendant in Virginia where we were.

College is a perfect middle ground for this age group: Students are forced to make their own choices and take responsibility for them, but help and guidance are there if they need it. What I see, though, is that the self-reliance they should be developing is thwarted by parental involvement. An academic advisor at Drexel told me the other day what she is most surprised by is how students “tolerate parental interference.” Even worse, “They want and ask their parents to come to advising meetings.” I know a mother who watches the surveillance cams at her child’s school, for hours, hoping he will randomly walk past the camera’s corner. I know a mother who requests her college-age children’s syllabuses, puts exam and project dates in her own calendar, and sends her children reminders. I know a mother who checks her kid’s debit card daily, and then calls him and questions 3 a.m. pizza purchases. My daughters are on the same campus as me, and I don’t even know what classes they are taking. But so far, they come to me with the stuff that’s more important than any 3 a.m. pizza purchase or chem quiz, and I think they do because I give them space.  I let them make that choice.

I wonder if the parents so anxiously hovering, just trying to do their best, understand the twisty ways their students hide from them. Many students tell me they have fake Facebook pages, ones they use only for their parents, and “real ones” for their friends.  The decision over whether to "friend" a parent is a never-ending source of antagonism. The stories of kids getting “busted” in red cup photos are far too numerous to reiterate.

As much as parents use technology to peek in on their young adult children’s lives, students also use technology to remain dependent on their parents and avoid the hard work and sacrifice of growing up. They tell me about texting their parents with requests for cash, and parents using online banking to make the transfer. One student was proud that he conducted this whole text conversation as he walked to the bar where he intended on spending the deposit. His mother texted back “done” when the transaction was complete, just as he opened the door to the bar.

Parents have a view into their children’s lives that was not possible in the past. That makes letting go virtually impossible, forgive the pun. I spoke with a mother recently who said if it were not for Twitter, she wouldn’t know if her college junior son was dead or alive.  He is at Penn State, and in his freshman year, a fellow student was found in a stairwell, dead from alcohol poisoning. He had been dead for almost two days. She thinks this made her extra leery, and on the day we spoke he had been diagnosed with strep throat but hadn’t responded to any of her texts, so she found herself obsessively checking her Twitter feed, only able to relax and focus on her work when she saw he had put up a post.

I'm not immune to this, either. The other night I was wondering about the whereabouts of my own college freshman and willing myself not to text her. I picked up my phone when I heard a buzz, and lo, Hayley had checked into a restaurant on 4Square. Phew. But I am doing my best to maintain balance.

Trying to think of a new metaphor for my ideal style of parenting, I decided I want to be one of those guys on the landing strips at the airport, with the flags. I am on the ground, and my kids come see me when they need something and I direct them, but they are still operating the plane. I also decided that was a lot of words and I needed to find out what those people in the bright jumpsuits are called. After much unproductive googling, I contacted my air traffic controller cousin and this is what he wrote back:

“That position is called a ‘Ramp Agent.’ They do everything from guiding the plane into its gate, loading and unloading bags, cleaning the inside of the cabin, and just about anything else needed to get a plane ‘turned around’ and ready for its next flight.”

The code I have developed with my own daughter is this: If I haven’t heard from her in a few days, or if I just have an ache for her, I will send her a text that says, “Say ‘hi.’” She will respond with those two letters and it is astounding, really, how much better I feel.

I think we’re all more afraid in 2012, and that technology can both relieve and feed those fears.  I'm not accusing anyone of being a bad parent. The only reason we panic when we haven’t heard from our child for three days is because we can, and often do, hear from him or her nearly constantly. But learning to respect boundaries is part of this process, and we have to do it, even when technology has erased the lines. This is the same moderation and balance we want our kids to learn as they navigate the bumpy freedoms of adulthood. Just because you have access to all the alcohol you can drink doesn't mean you should. Just because you can shut off your alarm and roll over without any immediate ramifications doesn’t mean you should.

That's the lesson we parents have to learn. Just because we can peek in on our children, doesn't mean that we should. Just because you can see that your child has not swiped in at the Dining Center but instead bought $12 worth of snacks at the campus bodega, do you need to know that information? Would you tell your vegan friend that you polished off a family-size bag of Doritos last night, texting her that information as soon as you sucked the orange dust off your fingertips? I am going to do my best to stay a ramp agent and try not to helicopter, waving my flags on the tarmac -- even if sometimes that waving gets frantic.