Why Mitt should rethink his debate boycott 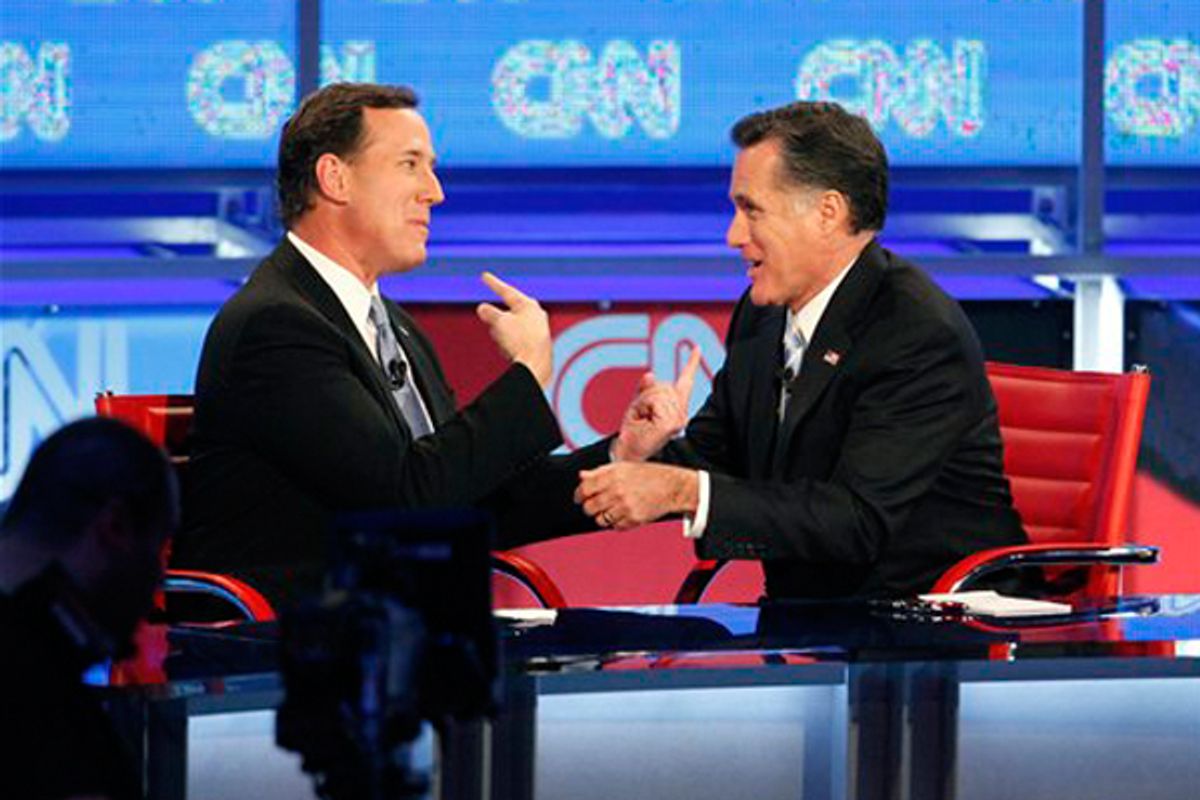 The final scheduled Republican debate took place a week ago tonight. Originally, another one was supposed to take place on March 1 -- tomorrow night -- but Romney backed out of it two weeks ago, and since then his campaign has made it clear that they're not interested in signing up for any more.

The logic is understandable. Debates are unscripted events in uncontrollable atmospheres, and they've played a major role in shaping mass opinion this cycle, thanks to the gigantic audiences of Republican voters they've attracted. So the potential for a slip-up -- an off-the-cuff $10,000 proposition, for instance, or ending up on the wrong side of an exchange with an opponent -- is heightened, and the consequences of suffering one are amplified. Plus, even if nothing awful happens, the verbal jousting is liable to make everyone look bad, which may help explain why Romney's negative ratings have been rising as the debates have gotten more tense. From the better-funded Romney's standpoint, it's easier to avoid the risk of debates and to leave the attacks to negative ads and surrogate conference calls, with the candidate occasionally chiming in with a carefully scripted line at a tightly controlled event.

But there's a flip side to the risk: When debates go well, they can help.

Take the one that was held last Wednesday. By all accounts, it went very poorly for Santorum, who continually lapsed into Senate speak, offered tone deaf defenses of his previous support for earmarks and Arlen Specter, and uttered his infamous "take one for the team" remark. Romney, who pressed Santorum aggressively throughout the night, had a lot to do with this.

Of course, the exit poll data probably doesn't capture the real effect of the debate, since voters tend to not actually realize what drives their decision-making. In other words, a poor debate performance amplified by poor reviews by media commentators and partisan pundits will proabably cause a fair number of primary voters to change their views of a candidate. But they may tell themselves -- and pollsters -- that it was jobs, or the deficit, or social issues that helped them make up their minds, even though they're actually latching on to those issues to explain their emotional response to the debate.

It's probably impossible to quantify, but Santorum's face-plant last Wednesday may have been more significant than we realize. The reviews were scathing, unflattering clips of Santorum filled the airwaves for the next day, and Republican activists and officials around the country were apparently unnerved by it. How many lost votes, or potential votes, for Santorum can be traced to the negative impression this created?

It's true that Romney had some trouble of his own at the debate, mainly with his needlessly snippy command to John King that "You get to ask the questions you want, I get to give the answers I want." But his campaign was feeling very good the morning after, and for good reason. And if it hadn't been for his own self-inflicted damage at Ford Field on Friday and at Daytona over the weekend, the final outcome might not have been as close as it was.

Romney is now running from behind against Santorum in Ohio, which votes next week. Given how the last one turned out, a debate might be very helpful right about now.