Does he even know – or care – what he’s been reduced to? 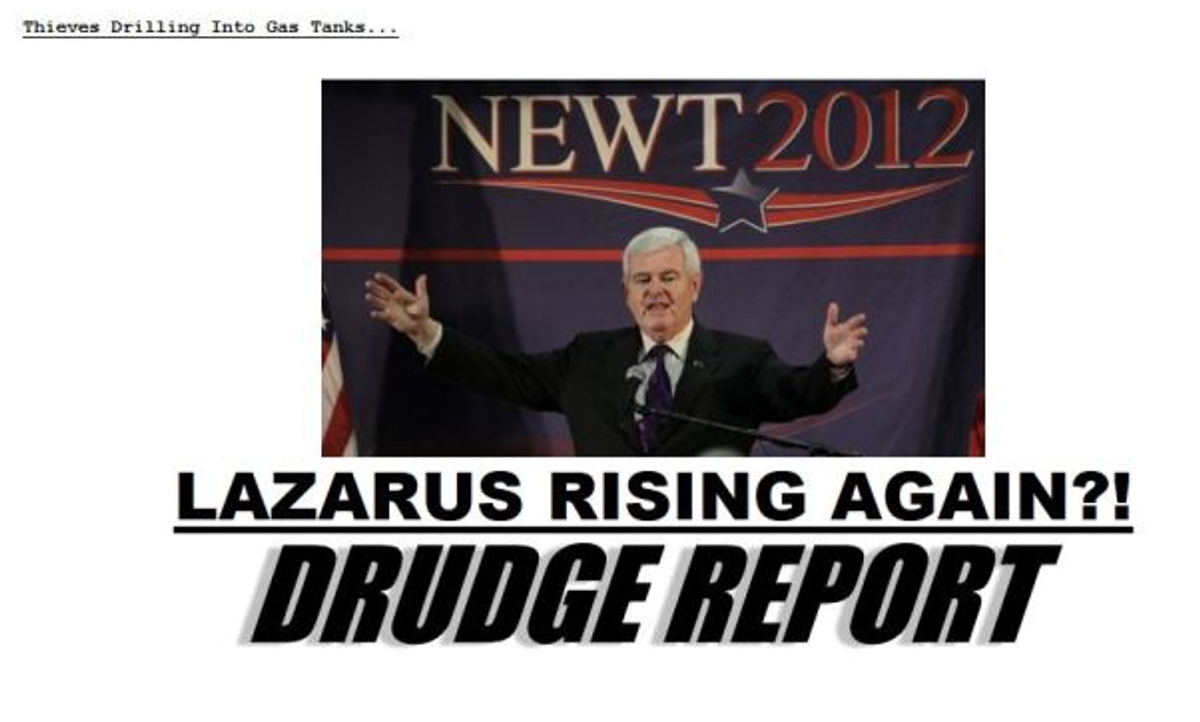 Two months ago, after his demise from Iowa front-runner to caucus night also-ran was complete, Newt Gingrich seemed intent on staying in the Republican presidential race for one reason: to make Mitt Romney's life as miserable as possible.

In the weeks leading up to the Iowa vote, Romney had played dumb while his super PAC allies gutted Gingrich on the state's airwaves, filling the former speaker, who insisted through it all that he wouldn't respond and was dedicated to running a "relentlessly positive" campaign, with a powerful sense of aggrievement. After Iowa, Gingrich reconnected with his inner attack dog and took to ridiculing Romney as a "timid Massachusetts moderate," while a pro-Newt super PAC took some shots of its own. It was enough to propel Gingrich to an improbable South Carolina win that humiliated Romney and briefly thrust his campaign into crisis -- and that gave Gingrich some of the revenge he badly desired.

Newt's big moment after South Carolina was, of course, short-lived. He'd accumulated far too much personal, ethical and ideological baggage and far too many enemies within the GOP's opinion-shaping class to hang on to the front-runner's spot in a national campaign for very long. An informally coordinated and lavishly funded campaign by the Romney forces and the GOP elite melted Gingrich's support and led to his lopsided defeat in Florida, an outcome that turned him into the campaign trail afterthought he now is.

But he's pressing ahead anyway and vowing to win his home state primary in Georgia next week. No matter the outcome, though, his campaign really is hopeless; the Republican Party has now made it clear twice -- once when he was surging in Iowa, and again after his South Carolina win -- that it will not allow Gingrich to be its presidential nominee. At this point, his lingering presence has one main effect: It gives Romney -- the man who just a few weeks ago Gingrich was intent on tormenting -- exactly what he wants.

Since Gingrich is incapable of holding together a winning coalition for more than a few days, the only other candidate in the race with the potential to stop Romney is Rick Santorum. And to have any chance, Santorum needs the party's conservative base to unite behind him. So pretty much any support that Gingrich wins going forward will come from the voter pool Santorum badly needs to monopolize, creating an opportunity for Romney to win key primary contests with well under 50 percent of the vote.

The pro-Romney forces clearly grasp the potential usefulness of Gingrich and are being fairly blatant in their efforts to fortify him. The story of Sheldon Adelson, the casino magnate and Gingrich super PAC supporter, is well-known by now. Adelson has a long-standing personal and professional alliance with Gingrich, but he doesn't care for Santorum and has essentially been flipped by Romney's team. Adelson is still pouring money into the pro-Newt super PAC, but with the expectation that it won't be used to tear down Romney (as it was in South Carolina) and that Gingrich will play a key role in making sure Santorum doesn't win the nomination.

Even more amusing are the antics of Matt Drudge, whose site plays a major role in shaping conservative commentary and news coverage. Drudge's friendliness to the Romney campaign is well-established. When Gingrich was on a roll after South Carolina, the Drudge Report dutifully went to war with him, devoting its most prominent slots to links that portrayed the former speaker in an ugly light. And Drudge essentially did the same thing to Santorum last week, as the Michigan primary approached. And now, with Romney still in danger of suffering a bad Super Tuesday, Drudge is playing the Newt card. Before news of Andrew Breitbart's death overtook the site late this morning, the lead Drudge Report story showed a picture of Gingrich with the headline, "Lazarus rising again?!"

If you followed the link you were directed to a post at the right-wing site Hot Air arguing that Gingrich might be on the verge of a third comeback. The evidence?

Yet, today, Gingrich has at least one bit of poll improvement to tout: His Gallup support rating jumped two points today. With his personal life out of the limelight and his ideas about energy policy front-and-center, at least a few folks apparently have remembered Gingrich ain’t all bad.

Yes, that's right: Gingrich crept up from 14 to 16 percent in Gallup's five-day rolling average and it was enough for Drudge to hype it as his lead story. What's more, the Hot Air post went up Wednesday night, and the Gallup poll in question was released earlier that day. The next Gallup daily poll, released Thursday afternoon, had Gingrich at 15 percent -- a drop of 1 point from Wednesday. In other words, he lost 50 percent of his surge in one day. It's almost as if Drudge, for some strange reason, was going out of his way to make Gingrich seem more viable than he is.

It's the clearest sign yet of what Gingrich has been reduced to: a useful tool for supporters of Mitt Romney. The question is whether the former speaker knows, or even cares, that this is the case.