Occupy's day of action: A step, if not a leap

From New York to Portland, Wells Fargo and Bank of America are the target 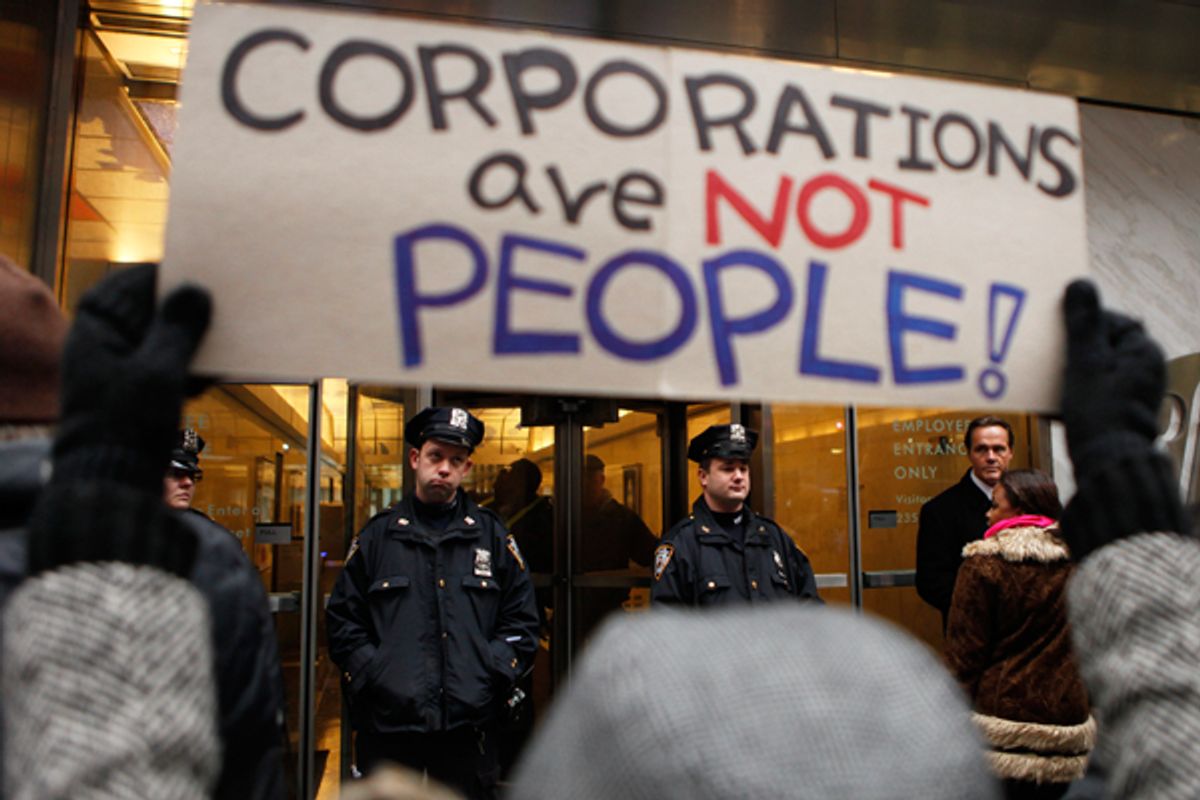 It feels a little bit like the early days of Occupy: My feet ache from walking up and down Manhattan blocks from rally point to march to rally point and on; I'm scanning Twitter to catch up on arrest numbers, details I didn't catch firsthand and news from actions in other cities; I'm wondering about the Occupy actions later this week. As such, the #F29 nationwide "Shut Down the Corporations" effort felt like a concerted step, although not perhaps the proposed "leap," back to action for Occupy on Leap Day.

In New York, cold, steady rain hampered events, but a spirited 200 or so Occupy supporters met in midtown to protest both Pfizer and Bank of America. Rolling Stone's Matt Taibbi gave a teach-in to a drenched but attentive crowd in Bryant Park, explaining the basics of the subprime mortgage crisis, too-big-to-fail banks and, in particular, Bank of America. "Mortgage-backed securities are like banks selling oregano as weed. And that's exactly what Bank of America was doing," he quipped.  Earlier Wednesday morning a crowd of about 80 gathered outside the midtown headquarters of pharmaceutical giant Pfizer before marching to Bryant Park.

The New York action culminated in an attempt to rally directly outside a heavily barricaded and police guarded Bank of America Tower. Protesters were kept across the street from the building by the NYPD. There were a total of four arrests, including a tall woman dressed in a red clown costume, who was led away in plasticuffs rain-soaked but skipping. In both size and intensity, the action paled in comparison to some of the Occupy scenes in downtown Manhattan last year. However, considering the freezing, driving rain, I was encouraged by the signs of a committed return to street actions.

Meanwhile, at the origin of the #F29 call, Occupy Portland and Occupy Oregon had a day truly reminiscent of Occupy's first flush. According to reports from the Oregonian, a march about 1,000-strong descended on downtown Portland.

Along the way, demonstrators went into the downtown McDonald's, stopped at the Verizon outlet on Southwest Broadway and circled the Wells Fargo Center to demand that those companies and others withdraw from the council, which writes model legislation that leans right politically.

The only reported intense confrontation of the day in Portland occurred when mounted police officers moved into a crowd outside the Wells Fargo Center. In line with a point recently made by anthropolgist and anarchist David Graeber about the use of black bloc tactics, masked protesters appear to have acted strategically. According to the @OccupyOregon Twitter feed "#Blackbloc used their shields to drive the horses out of the crowd." (No doubt debate over these confrontations will ensue). And, in other high jinks, an occupier, posing as the P.R. director of healthcare contractor Regence, gave a hoax press conference claiming to sever all ties with ALEC.

So although no major corporations called it quits in response to widespread, quixotic demonstrations, the day served its purpose in fueling some Occupy fire.