I was a hardcore lesbian when I came to the famously freaky city. So how did I start sleeping with men? 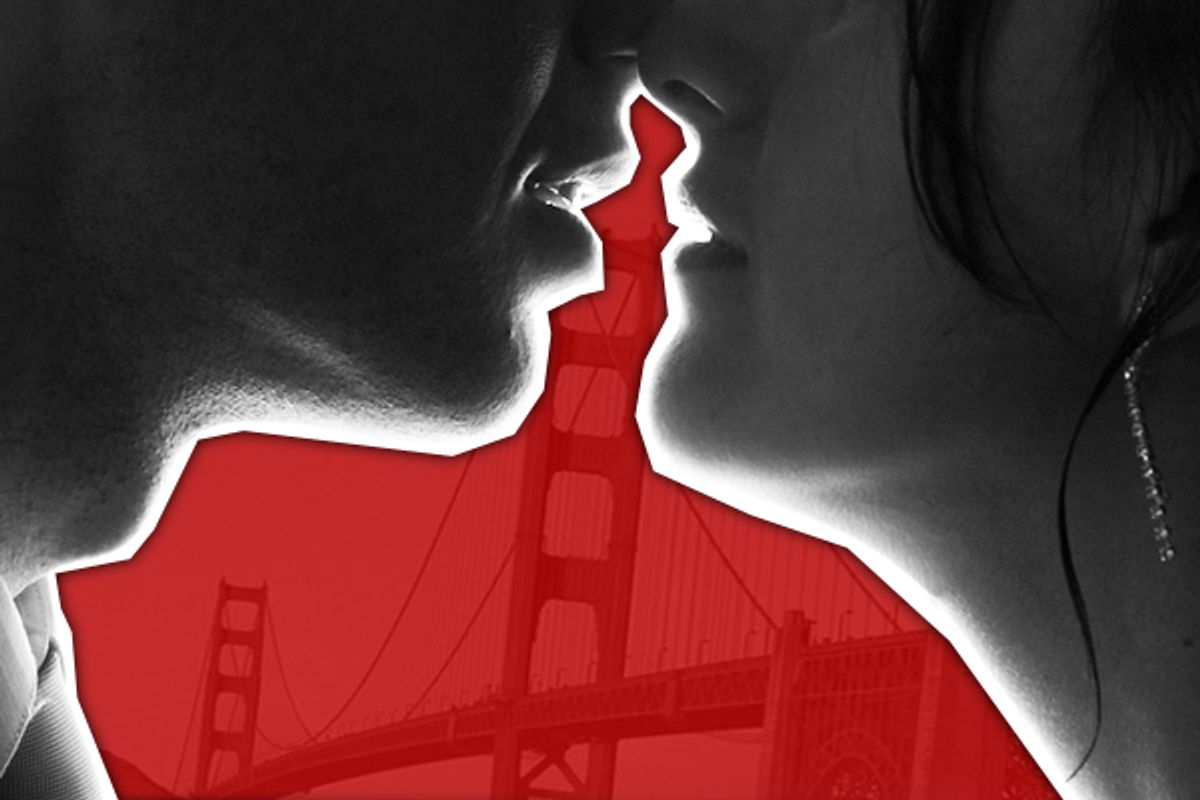 This essay is the first in a new series on Salon about bisexual experiences.

I proposed to my last girlfriend in Lesvos, Greece, at sunset, overlooking the craggy shores of Skala Eresou. I carried the ring 8,000 miles. I wasn’t eloquent, but she cried and I cried and as we walked back to our rented house, we played a game where we guessed the number of stray cats we’d see along the way. We said the loser had to kiss the winner a million times.

My ex-girlfriend now has a boyfriend and lives in Minnesota. My yoga teacher, who announced to her mom at age 8 that she was a lesbian, now exclusively dates men, and has been in a committed relationship with a man for more than a year. My straightest guy friends have all at least made out with other men, while others are now dabbling in full-on dude sex. Whatever norm you came in with, San Francisco eventually takes it and turns it right on its (uncircumcised, pierced) head. It shouldn’t have surprised me that the City wanted to have its way with me too.  Still, I was the last person who thought I’d be a lesbian who spent the next year and a half of her life ...

Sometimes I think S.F. is one of those Emerald City-type places where, free of many of the cultural or religious constraints that plague other cities, you can be the truest version of yourself, or at least have a really good time exploring untrue versions of yourself along the way. It’s a city that embraces the idea of potential, not limitations. I realize, of course, that sexuality can’t really be articulated or altered by a ZIP code, but all this flip-flopping seemed pervasive to me, and I figured the City itself, its brazenness, its tendency toward experimentation and spectacle, had to at least play a role in this shifting sexual mind-set.

I didn’t realize I liked girls until I was 20, so I was never a gold-star lesbian (someone who never slept with boys), but I am pretty stereotypically gay. I was a high school gym teacher. I drive a pickup truck. I minored in women’s studies. I know the difference between tempeh and seitan. It’s all womyn and grrls up in this hizzy, in other words. Yet I found myself a few months after my breakup mired in men, and behaving a lot straighter than I had at any other time in my life, which includes the brief affair I tried to have with eyelash crimpers in high school.

The first guy in S.F. I slept with was a friend I’d known for years. He offered to be my wingman at a tranny dance party during Pride weekend, but at the end of the night, we were the lone “straight” couple making out on the dance floor. It was somewhat embarrassing, actually. I felt like I was betraying myself, and “my people,” which was silly because no one knew who I was or cared about whom I made out with. As if the hot boi in the bow tie and suspenders would suddenly leap up and pronounce me a fraud between Le Tigre mashups. I went home with my friend and we had sex for hours. We didn’t discuss anything or stop to wonder if this was a good idea. We just kept moving to the rhythm of each other’s particular hungers. Afterward I felt so relieved. The months of frustration and rejection that led to my breakup were all released during this one marathon night of hetero sex. “I’m OK,” I thought. “I’m going to be OK.” While waiting for the bus outside his house, I burst into tears.

Then there was another friend, a new one. We went to a bar and he told me to tell him my life story, starting from birth. It took 12 hours, and he didn’t once let me ask him any questions in return. We held hands on the way back to his apartment and I remember thinking, “This is so wrong. Our hands don’t fit together. Our hands are just grasping at anything.”

San Francisco’s not an easy city to live in. Everyone is struggling a little, to pay the exorbitant rents, to stand out in a lasting way, to grow up as slowly as possible. I was unemployed the first five months I lived here, then took an internship that paid $6.25 an hour. Without the relationship luxury of shared expenses, I was barely surviving. But I was writing and I was having sex, which somehow made my financial and emotional woes more bearable. After a while, being straight felt more subversive to me than being queer, even more so when I was having queer sex with straight men. I would strap on a dildo and screw men face down on the mattress. I would grip their hips in my hands and feel alive, powerful. “I am moving on,” I thought. “I am free and empowered. This city won’t break me.”

I had a moment of panic shortly after that, where I blamed all of this on my ex-girlfriend. If she can be straight, then so can I, I told myself, as if that would prove anything. As if it would take away the anguish and loneliness of a life that would never again be ours.

Since many of us in San Francisco are struggling, it makes our connections to other people all the more urgent. We may be dropping a grand each month to live in a closet, but at least we have friends, lovers and many of those murky, in-between relationships that resist definition and ease.

I had quite a few of these relationships. There was the writer, the filmmaker, the lawyer. None of them had names really. They were known to me by their professions, or in some cases, their kinks. It was freeing, in a way. In S.F., I wasn’t defined or confined by my identity as a lesbian. Nor did I have to make excuses as to why I didn’t want to be in a relationship with any of these men. It felt radical, for a time. I would tell them I liked girls, always expecting it to be a deterrent, slightly disappointed that it never was. Or maybe they just didn’t believe me. To these new people, my track record as a queer lady existed only in words, in stories that seemed to take place in some bygone era, when in fact it had less than a year.

In my darker moments, I saw my newfound straightness for what it was: a crutch to avoid the pain of being hurt again. If I in no way imitated that girl who got her heart broken, then I was safe. And since I wasn’t getting any attention from queer women anyway, did it even matter?

The longer I went without emotionally or physically connecting with women, the more confused I became. It was like I was watching a foreign film of my life without subtitles.

Being with men started becoming my norm. And it freaked me out. Because even though it wasn’t familiar, it was easy. There’s very little guesswork involved with picking up men. There was no need to scrutinize fingernail length or namedrop "The L Word" in order to determine if someone was amenable to sleeping with me. In fact, it was pretty much assumed that 15 minutes of uninterrupted talk with a dude meant the possibility of sex was on the table.

We like to name things because it gives us a sense of order and comfort. So we can feel connected to one another. If I say I’m a daughter we all know what that means. Or a liberal, or a feminist, or a molecular biologist. But sexuality often doesn’t work that way. If you don’t look the part of a queer, then you don’t exist. I encountered this problem in other areas of my life as well. I’m half Native American, but you’d never know it unless I was standing next to my raven-haired mother. In this way, my queerness didn’t make sense unless it was in relation to who I was fucking at the time, which further alienated me from my former sexual identity. When all you have is your word, you're always dependent on other people's beliefs.

On the rare occasion that a woman did express interest in me, she was usually straight, another byproduct of San Francisco’s peculiar lure. Everyone was getting their rocks off, but no one was happy. This became even more evident when my dude sex started to sour. One guy I met online thought he could make me orgasm by simply commanding me to do so. Another guy reached over and took a hit from a pipe while inside me. Then two of my sex partners started having sex with each other and stopped having sex with me. It was all such a big, sticky mess that I am still trying to untangle.

S.F. author Stephen Elliott wrote recently that “San Francisco is this great drug and you sit on top of Bernal Heights and watch boats named ‘Opportunity’ and ‘Raw Ambition’ and ‘Your Worst Self’ sail by so far off you can't read the red paint on their hulls, and throw your head back and open your mouth in the shape of a cloud.”

San Francisco taught me that a lot of things in my life had to end before I could begin again. It also taught me that there are no right or wrong ways to conduct your life, only honest ones.