The end of the Blunt amendment 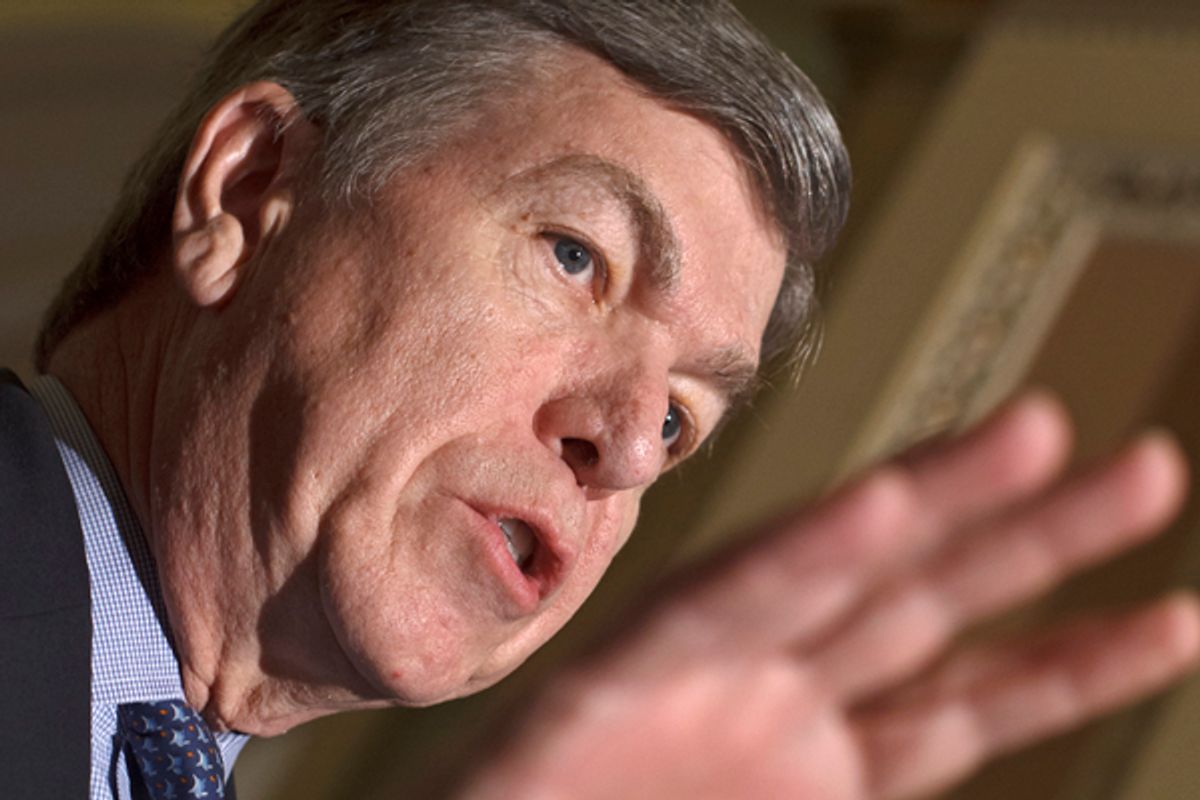 This morning's Senate floor speeches on the Blunt amendment -- which would have allowed employers to deny their employees insurance coverage for anything they objected to on religious grounds, and which failed 51-48 -- featured David Vitter lecturing about religious liberty and moral values, and recycling the fiction that Plan B is an "abortion-inducing drug." (Plan B won't work if you're already pregnant.) If you're interested in Vitter's perspective on contraception, you can ask the prostitute who said he was a frequent client -- Vitter has admitted to being a client of another escort service -- and that his preferred method was taking used condoms with him when he left.

That may have been the most entertaining hypocrisy today. But the most relevant words came from Colorado Sen. Michael Bennet, despite lacking the quotable women's rights affirmations of some of the Democrats or the clueless chest-beating of the Republican men who spoke. That's because he brought up the fact that his divided state had overwhelmingly rejected the Personhood Amendment (twice), which also sought to limit contraceptive access. Two years ago, Bennet won against Ken Buck partly on the strength of convincing independent women voters that Buck, who supported Personhood but futilely tried to back off, was too extreme on women. He ran ads featuring women, including an OB-GYN, focusing on Buck's hostility to reproductive rights. (As a prosecutor, Buck also suggested a rape victim had "buyer's remorse.")

By all indications, the Obama campaign is going the way of Bennet. As Mitch McConnell asserted that "if there's been one good thing about this debate, it's that it's given us the opportunity to affirm our values" and Orrin Hatch invoked tyranny, the Obama campaign put on its Tumblr a mock permission slip for employees wanting to use contraception. The main target? Mitt Romney, who, after some confusion yesterday, said he supported the Blunt amendment. Nancy Pelosi chimed in, mocking the fact that the vote was held on the first day of women's history month, as did Debbie Wasserman Schultz, whose statement basically spelled out the strategy: "This effort to roll back the clock on women’s reproductive rights is all you need to know about why moderate and independent voters are flocking from Mitt Romney and the Republican Party."

Having mostly weathered reproductive-rights advocates' dismay over its unscientific capitulation on Plan B access, the Obama administration now can plausibly put itself in the position of women's rights defender. It's not a stretch in this case, when it is genuinely expanding access to contraception, and particularly when the alternative is the male-dominated hearing convened in the House by Darrell Issa, or Rush Limbaugh calling an advocate for birth control access a slut -- a fact Sen. Frank Lautenberg didn't fail to mention today. Today was all about Republicans and Democrats alike showing where they stand when it comes to women's health and contraceptive access, by far the surest way to lower the number of unintended pregnancies. (The debate also served as a primer for the ignorant on how birth control actually works, since that was apparently needed.)

Which is what makes the narrow margin by which the amendment was tabled so pathetic. Its supporters included Democrats like Joe Manchin, Bob Casey and Ben Nelson, as well as Republican "moderates" Scott Brown and Susan Collins (who mostly seemed upset at the level of due deference she believed had been denied to her). If this is supposed to be an issue where Republicans are showing how extreme and out of touch they are on mainstream women's health issues, what were they doing in the fold?