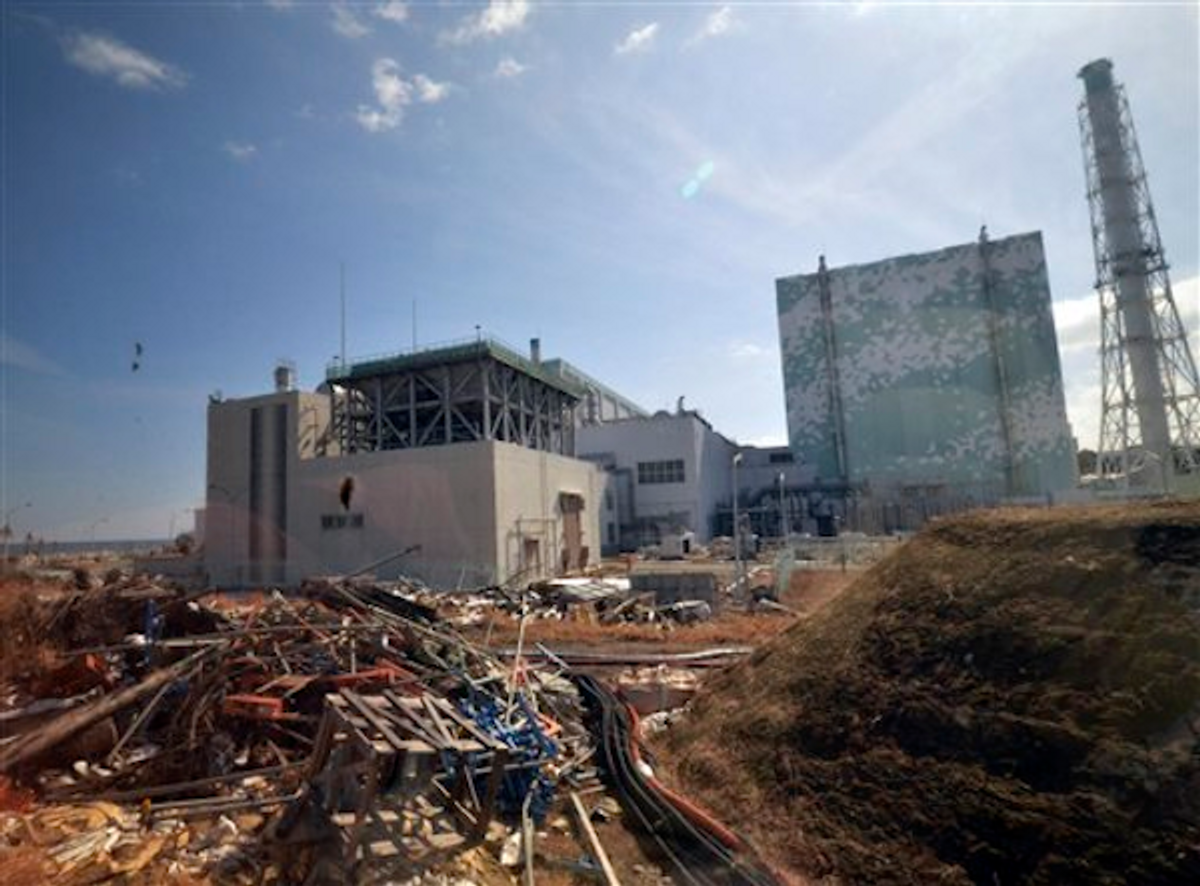 FUKUSHIMA, Japan — A visit to the scene of Japan's worst nuclear accident, almost a year after the area was struck by a powerful earthquake and tsunami, is a study in contrasts.

Elsewhere along the vast stretch of coast hit by the March 11 tsunami there are palpable signs of progress. Almost all of the 23 million tons of rubble has been removed, although rebuilding has yet to start.

But at Fukushima Daiichi nuclear power plant, the cleanup looks like it has barely begun. Instead, the real work is being done, unseen, deep inside the crippled reactors, where melted fuel remains cool, but whose precise state and location remains a mystery.

The destructive force of three reactor meltdowns is evident as soon as the bus carrying a small group of journalists invited by the plant's operator, Tokyo Electric Power (Tepco), enters the 20-kilometer (13-mile) exclusion zone imposed after the first reactor building exploded on March 12.

In the town of Naraha, most of the buildings emerged unscathed from the quake, but the streets are deserted. We pass a convenience store with its stock sitting untouched on shelves, and a parking lot dotted with cars that were abandoned in the panic.

During the short journey to the plant from J.Village — a soccer training complex that is now the logistical base for the Fukushima Daiichi cleanup operation — radiation monitors alert us to the invisible enemy that has driven 80,000 people from their homes.

Radiation levels rise and fall, soaring to 35 microsieverts per hour in Okuma, a farming village two kilometers from the plant that could remain uninhabitable for decades.

The abandonment of entire communities is troubling enough, but little can prepare you for a close-up view of Fukushima Daiichi's damaged reactors.

One is shrouded in a vinyl cover while another appears largely intact, its mottled turquoise and white pattern clearly visible on a cold, but brilliantly sunny winter afternoon. The Nos. 3 and 4 reactors, however, are a tangled mess of steel and debris.

This low-lying area near the coast is by far the most hazardous part of the site. High radiation levels have hampered work to clear the wreckage and inspect the state of the melted fuel. The day before our visit, a robot sent inside reactor No. 2 reactor found 200 millisieverts per hour at one spot.

The reactors proximity to the ocean made them easy targets for the 14-meter (42-foot) tsunami, which effortlessly breached the plant's protective wall. Along one side of the coastal road, mesh sacks filled with rocks provide makeshift reinforcement; on the other are the exposed innards of the reactors' turbine buildings, crammed with twisted metal, warped shutters and trucks swept up and deposited by the waves.

But the clutter tells only half the story. From the outside, the appearance is one of utter chaos, but inside, damaged nuclear fuel is being kept cool by vast quantities of water, which is then stored in tanks covering almost every spare patch of ground on the site, before being decontaminated and fed back into the reactors.

Water management is critical to preventing the fuel from heating up again and setting off a potentially catastrophic nuclear chain reaction, says Katsuhiko Iwaki, deputy manager of the Fukushima Daiichi stabilization center.

The current capacity of 165,000 tons of water will reach its limit by April, he says, adding that Tepco is adding space for tens of thousands of tons of additional water.

Work near the damaged reactors is still fraught with danger. "Most of the workers here perform a two-hour shift in the morning and again in the afternoon," Iwaki said.

"But there are other areas where the dosages are so high they can stay there for only two or three minutes. That's just enough time to connect a hose before their alarms signal it's time for them to leave."

Satoshi Tarumi, whose job is to monitor the health of those workers, arrived at the plant three days after the tsunami. Conditions have significantly improved since then, he says, and despite his relatively young age, 33, he does not fear for his health.

"As part of the Fukushima Daiichi staff I feel partly responsible for what happened, that's why I want to be involved," Tarumi said. "My exposure levels are still below the legal limit, and I don't see any problem working here."

He is similarly matter of fact when asked about the future of the industry that provides his livelihood: "It's up to the government to make a decision on nuclear energy. I'm just here to do as much as I can to help stabilize the plant."

At the apex of the Fukushima Daiichi operation is Takeshi Takahashi, a serious-looking, quietly spoken man who became the plant's manager last year after his predecessor, Masao Yoshida, took early retirement after being diagnosed with cancer (Tepco says the illness is not related to his work at the plant).

Takahashi concedes that the situation on the ground is still fragile. "We need to avoid major releases of radioactive materials of the kind we saw after the accident," he said.

"We achieved cold shutdown [a stable state in which reactor temperatures remain below boiling point] in December, but we must ensure we keep making improvements because we still can't say for sure that the facilities on site are totally trouble-free."

Those facilities are monitored around the clock by up to 700 Tepco staff ensconced in the emergency control room. Divided into pods depending on their expertise, they are linked to workers in the field and the utility's headquarters in Tokyo via two enormous screens. Along one wall are messages of support, including a giant Japanese flag bearing the Japanese character for "hope."

Takahashi made no attempt to deflect criticism of Tepco's conduct in the early days of the crisis, when information was scarce, and sometimes contradictory. His priority, he says, was to pave the way for a return home for at least some nuclear evacuees.

"We often hear that we didn't communicate properly, and I am sorry about that," he said. "It was never our intention to suppress information, but there was a chaotic time after the accident when we tended to neglect efficient communication.

"I'd like to apologize for the troubles and concerns we caused for local people. We need to secure safety in order to bring comfort and relief to the local residents. We are trying our best now to bring those who evacuated from the evacuation zone back to their homes as soon as possible," he said.

Reports suggest that radiation levels in some areas near the outer edge of the evacuation zone are low enough for a small number of residents to return in the coming months.

They will not include Saori Kanesaki, a resident of Tomioka, a town in the evacuation zone, who until last year guided groups of visitors around Fukushima Daiichi.

"Before the accident it was my job to tell people that nuclear power was safe," said Kanesaki, who now works at the plant for a Tepco affiliate. "But given the situation, if I were to tell them that now ... I would be lying."