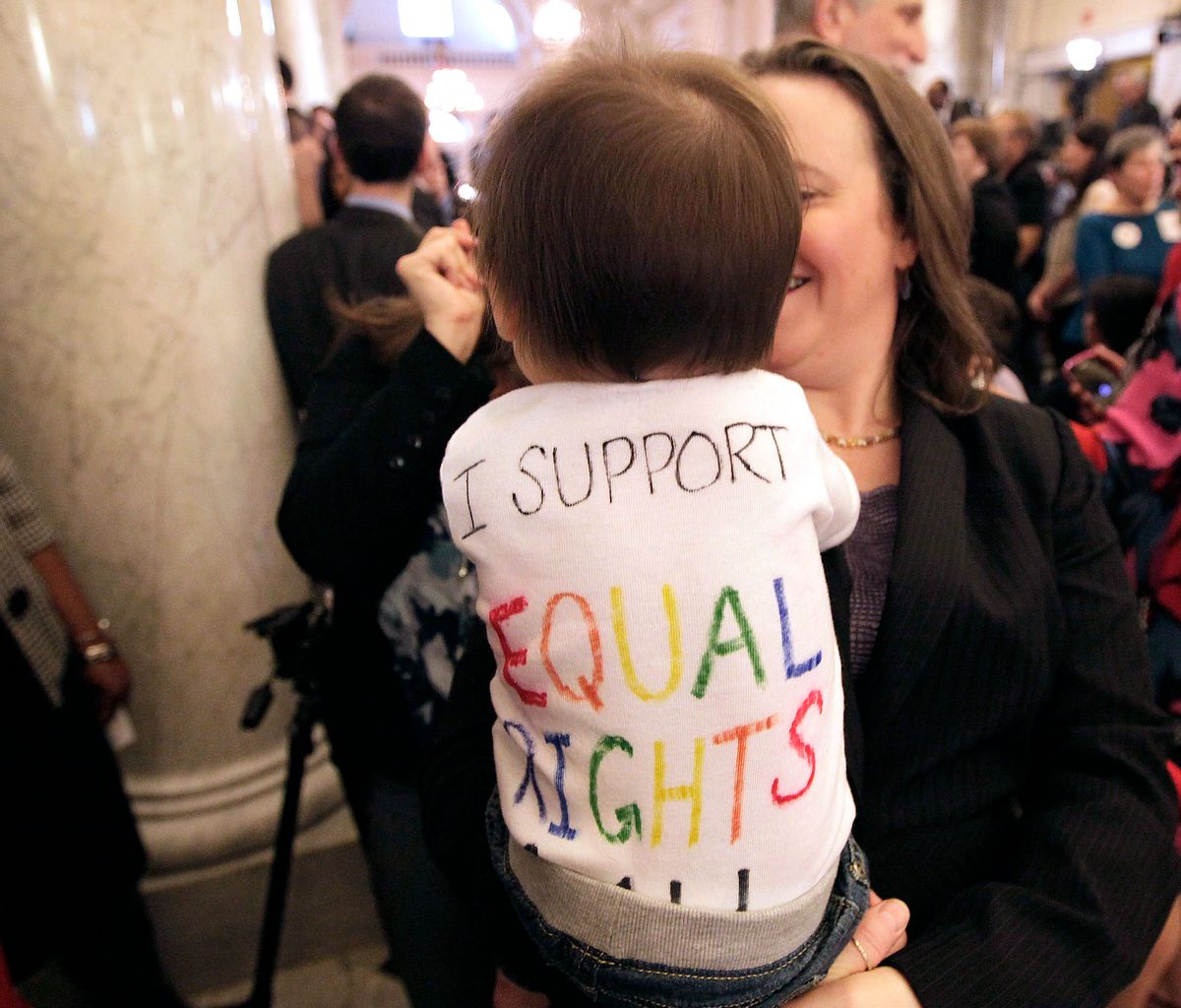 As Maryland and Washington join six other states in approving same-sex marriage, it's clear that the era of politicians exploiting the issue for political game appears over. Just ask former Republican strategist Ken Mehlman, the man who managed George W. Bush’s 2004 campaign, noted for its aggressive anti-gay marriage stance.

“If you look at attitudes today and where they are headed, it’s clear to me that supporting equal rights, including the rights to civil marriage, is a net positive for winning elections, as well as the right thing to do,” Mehlman said in an interview. “By contrast, opposing equal rights is a net negative that gets problematic to more voters each year.”

Few political figures in contemporary politics embody America’s transformation on same-sex marriage as much as Mehlman. After years of whisper campaigns about his sexual orientation, as well as personal criticism for managing Bush’s reelection, Mehlman announced in 2010 that he is gay; since then, despite taking flak from both right and left, he has fought on behalf of equality.

When I asked Mehlman, a partner at a New York private equity firm, to handicap gay marriage as a state and national political-electoral issue today, he said: “Most polls now show that a majority of Americans support gay marriage. What you see in Maryland and Washington, and states like New York earlier, is a reflection of politicians representing their constituents.”

As for his role in the 2004 Bush campaign and its exploitation of marital politics, Mehlman is  candid — and remorseful.

“At a personal level, I wish I had spoken out against the effort,” he says. “As I’ve been involved in the fight for marriage equality, one of the things I’ve learned is how many people were harmed by the campaigns in which I was involved. I apologize to them and tell them I am sorry. While there have been recent victories, this could still be a long struggle in which there will be setbacks, and I’ll do my part to be helpful.”

“The nation has transformed since 2004,” agrees E.J. Graff, a resident scholar at Brandeis University’s Women’s Studies Research Center and author of "What Is Marriage For?"

“Marriage equality advocates have so much more support now than in 2004 that running anti-gay referendums, like the Republicans did in 2004, would now have the reverse effect of bringing out more Democrats and straight supporters of gay rights,” she said. Graff, also a contributing editor at the American Prospect, laments that the battle to undo many of those 2004 referendums barring recognition of same-sex marriage “will not be any fun.” But she firmly believes “Americans aren’t shocked anymore at the idea that two women or two men want to marry.” After the initial backlash, rapid changes in public opinion mean that same-sex marriage “is just not as much of an issue today.”

It’s unclear whether Clinton’s support of DOMA helped or hurt him in 1996. As for 2004, subsequent analyses of the election results that year revealed two things: that turnout in the 11 states with ballot measures banning same-sex marriage was no higher than in the 39 without them. Contrary to one political myth, the presence of these referendums likely had no effect on the outcome of the Bush-Kerry presidential contest. But this we do know: Clinton advisor Dick Morris and Bush guru Karl Rove obviously believed their bosses’ anti-gay postures met the Hippocratic electoral standard — that is, their positions would do no harm to either president’s reelection chances.

This year, how much attention marital politics attracts during the general election may largely hinge upon whom the Republicans nominate. Former House Speaker Newt Gingrich, for example, says that although he personally opposes same-sex marriage, from a federalist standpoint he approves of the way politicians are using public ballot measures to give voters, rather than courts, the power to decide the issue in each state. Ron Paul’s view is similar to Gingrich’s.

Rick Santorum, meanwhile, remains firmly opposed, and is practiced in the dark art of depicting anything other than heterosexual, monogamous marriage as an immoral affront to divine design. As for beleaguered front-runner Mitt Romney, his position is just as flip-floppy as it is on so many other issues: He was for same-sex marriage as Massachusetts governor (issuing at least 189 special licenses to gay couples) before he was against it.

But Mehlman is encouraged by changes within his party, especially the support among younger Republicans for marital equality and related positions. In 2011, Mehlman personally lobbied 13 New York state Republican legislators to help pass the state’s same-sex marriage law, and did the same with 10 Republican U.S. senators during the congressional battle to repeal "don’t ask, don’t tell." Although he is still a loyal Republican — he recently contributed to a fundraiser for House Speaker John Boehner, a gay marriage opponent — a month ago Mehlman published an Op-Ed in the conservative Manchester Union-Leader in which he explained to conservatives and Republicans why supporting same-sex marriage venerates their beliefs not only in individual and economic freedoms, but personal responsibility and family values.

Freedom to Marry founder and president Evan Wolfson says that, although he realizes Americans will have important economic concerns on their minds during this presidential election, he expects that “from time to time” marriage equality will surface as an issue throughout the year. “All of the Republican nominees have, to varying degrees, pandered to their party’s base — a base that’s out of touch with many Republicans,” Wolfson told me. He cited a July 2011 national polling memo co-authored by Obama pollster Joel Benenson and former Bush pollster Jan van Lohuizen that confirms the dramatic, recent shift toward public acceptance, if not approval, for same-sex marriage.

As for the 2012 Democratic nominee, President Obama’s record on same-sex marriage is “evolving” but still mixed. He and his White House are already feeling pressure from marriage equality advocates, the Democratic Party and even his own campaign leadership to endorse marital equality as part of the Democrats’ 2012 national party platform. “We have strongly urged the president to complete his journey — his evolution, as he puts it — on the freedom to marry,” says Wolfson, “because it’s not just the right thing to do, but the right thing to do politically.”

Progress toward nationalizing same-sex marriage is hardly linear. For every step forward there is often a half-step backward. The passage of California’s Proposition 8 in 2008 was a crushing blow to the movement, and although the Court of Appeals’ 9th Circuit recently invalidated Proposition 8’s same-sex marriage ban and a new poll this week reveals a significant jump in approval for same-sex marriage in the state, the popular vote defeat in an otherwise liberal state that Obama won comfortably still stings. There are also reports this week about a serious effort to revoke the same-sex marriage law in New Hampshire, where Republicans regained control of the Legislature in 2010.

But as the 2012 general election approaches — and despite Santorum’s earnest attempts to reinvigorate culture war politics — the reality is that same-sex marriage fear-mongering and other forms of electoral gay-baiting no longer work as wedge issues the way they used do. DADT is dead, and thanks to a court ruling this week penned by a Bush-appointed federal judge, DOMA is on the ropes, too. If not already, soon enough same-sex marriage will act as a wedge issue that works against conservatives, Republicans and opponents of marital equality.