What not to wear after the divorce

I once found joy in shopping, but when my marriage fell apart, so did my retail flirtations. Or so I thought 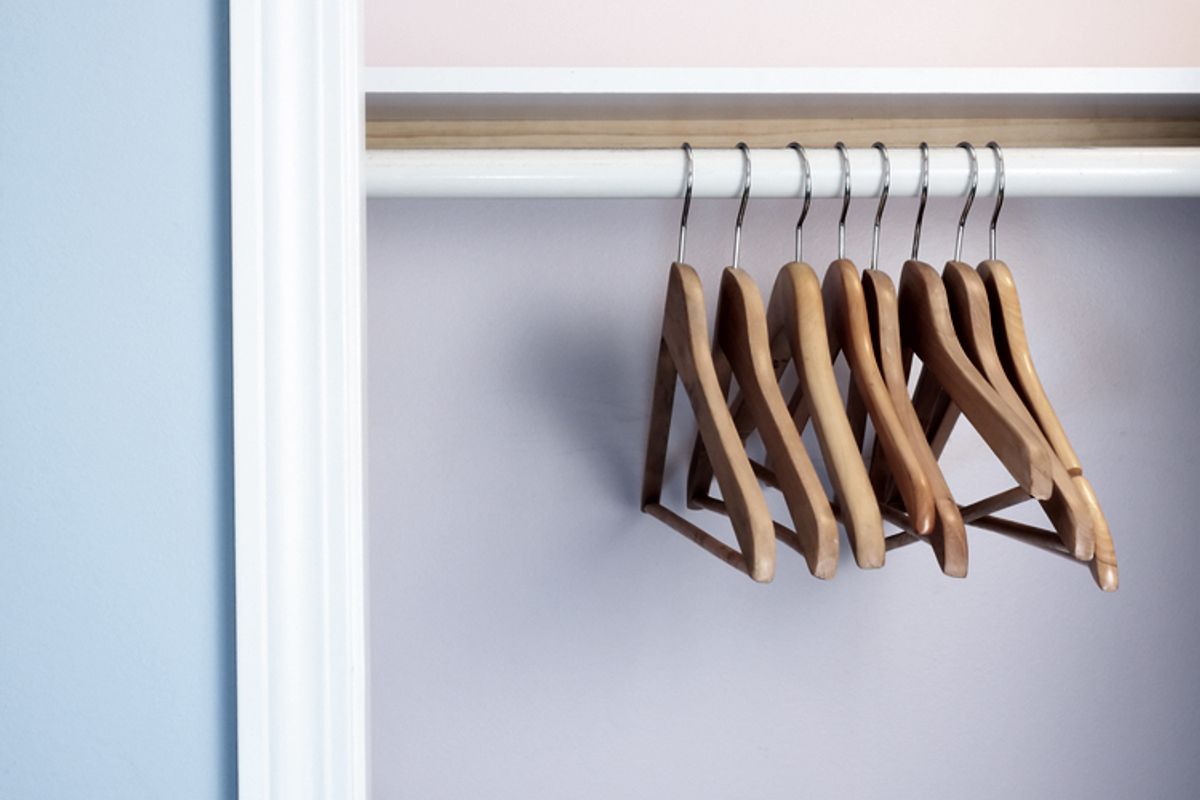 The wallpaper in our new kitchen in our new town was a brick red, with ocher chickens on it, and peculiar little men. Tiny men, hunched over, farming, maybe. I agreed to live in the house on the condition that I could eradicate the itsy male people, slather texture over their bodies and paint them into nothingness. One day, while perusing the phone book for a person who would do the honors, I had the crazy good fortune to discover that Loehmann’s had an outpost within city limits. Yes, Loehmann’s, Chas E. Loehmann’s. The Big L. Lo’s. The department store of my New York youth, right in Texas, the place where I had wound up.

I should back up. There is that bench that rings the perimeter of the store’s dressing room and is attached, somehow, to the floor-to-ceiling mirrors that comprise the four walls. I spent half of my childhood on that bench, a receptacle for my mother’s sartorial decisions. Picks piled on my lap. Possibilities dangling on my head, from the hook above.

There were no individual chambers at Loehmann’s, no doors behind which the women could disappear. Instead, they tried on their selections in front of everyone else. There was an understanding that the ladies in the dressing room would tell you that the trousers you were trying were too tight, and that they’d even touch you and spin you around to make sure. Then, they’d ask the shopper to their left, who might have been bra-less, for corroboration. She’d discuss, as if she were wearing an anorak. There would be a summit about your rear end. And talk about mastectomies and in-laws and grandkids who couldn’t read. There would be laughs and hugs, even. Loehmann’s was life’s microcosmic training ground. It was where I witnessed sisterhood and love and all the levelers, emerging through the velvet curtain like a human garment rack, a very enlightened human garment rack. And when the clothes could fit me, it is where I shopped.

I did not think to look for a store in Texas, where I had moved with my husband. Seeing the name in the directory, en route to Lone Star Painting, was celestial. It was the net under the tightrope.

“Go, with all speed,” came the maternal wisdom from New York.

Once each month, I designated a Friday morning for personal betterment, salvation from the daily routine, from discontent. I emerged luminous and recharged, weighed down only with bags of enviable duds. I wore a different purchase each Saturday that I went out for dinner, snipping off the tags as needed. “Where did you get that?” my husband’s colleagues would ask. I would not tell. The dinners never kept up with the clothing, rendering my closet a flutter of blue rectangles, my own Loehmann’s annex.

Ultimately, there were no more dinners, as our marriage slipped into a private confusion. But I maintained the ritual, nonetheless, fully aware that the methodical march through aisles of atypical designs, adventurous experiments and, of course, designer mark-downs, was valuable. Cathartic. Uplifting. The clothing was independent at Loehmann’s, or at least, the clothing I liked. Not one to ban basics entirely, I learned early how to twist them up, to camouflage them with well-placed insanity, on the feet, down the arm, around the crooked, flared, fringed or otherwise adulterated torso.

During that first year after my husband moved out, I bought a black velvet haltered gown, ankle length; a soft red chiffon-y dress, empire, with spaghetti straps; a raspberry pink faux fur jacket, with a lavender tattersoll motif; among other impulses I thought I needed at the time. I bought skirts with ruffles adorning the hips, skirts with flaps, skirts with exaggerated stitching, skirts that looked like headbands. Sweaters with bows on the waist, bells past the nail beds, holes in the scapula.

In the dressing room, the ladies talked, though less than they did in New York. But I engaged them, because it was Loehmann’s and they were supposed to engage, to confide, encourage, commiserate and prevent a disaster at checkout. I met many lovely women in various states of undress. My closet looked like a costume shop. Just the way I liked it.

The Friday after my divorce was finalized would be no different, I determined. I was officially unmarried, the head of the household, pilot of the plane, which, at that particular moment, had hit a bit of a chop. My book didn’t sell. My column was canceled. My kids outnumbered me. What better oasis. A block away, the bright blue “L” called out like a beacon. But as I drove closer, the shape of the “L” looked unfamiliar. Both legs of the letter were the same width; they should have been different dimensions, I knew. This was not the Loehmann’s “L.” Clearly, not the “L.” I turned into the vacant parking lot and felt the wallop in my belly. It was “L” for Lease. Gone. Blinked into vapor. This, too. The death of my Loehmann’s.

In the months following, I did not shop. I did not shop for eight years, actually. There are fine stores where I live, all the stores, really. In fact, I live in a retail mecca. But I did not participate. Like dating after widowhood, a purchase in a foreign bag would have felt disrespectful, too soon. I would never buy another garment. Never again gaze into a three-way, tilt my head to the side the way you do when you are deciding, twirl to see the swish of a hem. It had happened to me, the loss, the rediscovery, the swipe -- the narrative arc was complete. I was not to grow from the experience but instead, exist in pilled cardigans and faded jersey. No denouement pour moi.

“Do you need a hang-y top, soft floral pinkish print, with ties and some teeny pleats and long poufy sleeves?” Mom asked over the phone. “I’m in Lo’s. I’m buying one for me.”

This sort of thing happens a lot, Mom calling from the trenches to replenish the supply.  Maybe once in my life, I’ve worn something that someone gave me. Knowing this, she checks in advance.

“Listen, you could need this, it’s gorgeous.” I waited for the follow-up. “What you have is for a farm.”

The image of a milking stool went with me into my closet that night. There is nothing rural in here, I thought. There are no aprons, or overalls. There is no calico. Mom is nuts. Nuts! These clothes are the kind you want. They are swank. Clever. In the know. After an hour, I had collected four large bags of items to donate.

Energized by their really viable idea, they retrieved a camera. “Stand over by the bed and look pathetic. The shorts are perfect.”

Though proud of their enterprise, I realized, wincing from the photo, that my story needed a conclusion after all, and in a hurry. I had indulged a loss. I had let it dictate a course of action that was not genuine and, worse, not flattering. I was the girl with the zip, the creativity. I was the NBC peacock for Halloween, in journalism school, for crying out loud. I barely fit into the cab. What peacock in her right mind would look like this?

I made a list of stores that came closest to the spirit of Loehmann’s. I knew that they would not be Loehmann’s, which was the only way I could proceed. On the chosen day, I ventured out, anticipation in my brain, try-on mules on my feet. I eased into an aisle and found the groove, the pace. Soon, my eyes sharpened, catching prospects from just the hint of a collar or stretch of a sleeve. In minutes, the sound of tapping plastic hung off my arm, and crescendoed all the way to the fitting room door.

Inside my little stall, alone, I wrapped myself in a charmeuse sarong. In silence, I tilted my head the way you do when you decide, and twirled to see the swish of many hems.

Pamela Gwyn Kripke's essays have appeared in The New York Times, The Chicago Tribune, The Dallas Morning News, Redbook, and in newspapers nationwide as a columnist for Creators Syndicate. She is a regular contributor to The Huffington Post and covers breaking news in Texas for The New York Times.