When a party quits on its candidate 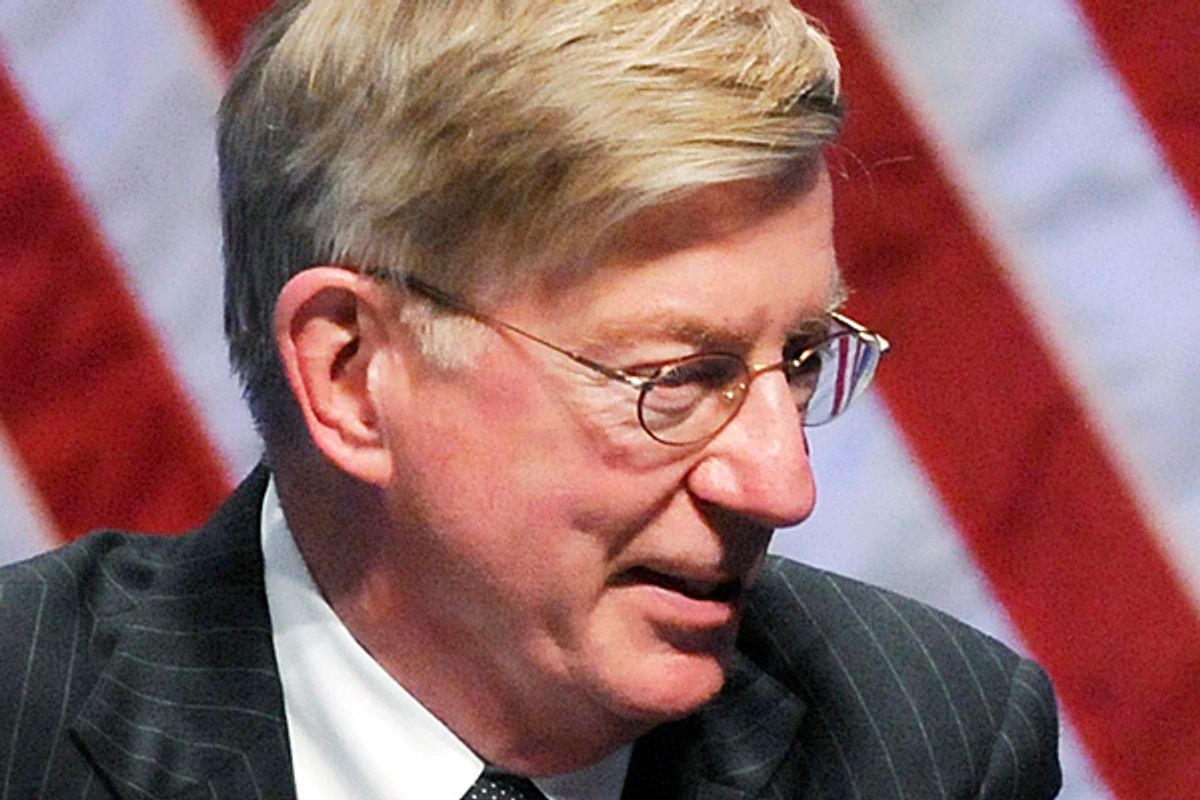 George Will has concluded that neither Mitt Romney nor Rick Santorum is likely to be elected president and believes that conservatives should set their sights on a more “attainable” 2012 goal: holding the House and winning the Senate.

“If Republicans do, their committee majorities will serve as fine-mesh filters, removing President Obama's initiatives from the stream of legislation,” Will writes in a column that won’t be published until Sunday but that was teased by Politico’s Mike Allen today.

What’s striking is how early Will seems to be raising the white flag on the presidential race. Election Day is still eight months away, Barack Obama’s approval rating remains under 50 percent in most polls, the current economic recovery seems very tenuous and could stall at any moment, and general election trial heats put Romney (and Santorum, for that matter) within striking distance of the president.

Moreover, while this has been a dispiriting primary season for the GOP, it’s not exactly unheard of for a bloody nomination process to produce a weak-seeming nominee who goes on to capitalize on economic anxiety and do quite well in the fall.

And yet, Will, according to Allen, is raising the specter of a Goldwater/1964-like November catastrophe for the party.

This speaks to the poor impression Romney, Santorum and every other Republican who has sought the presidency this cycle has made on most of the party’s opinion-shaping class. Romney’s image with independent voters has suffered mightily, and there’s now substantial evidence that blue-collar voters – a key constituency that swung hard to the GOP in the 2010 midterms – are turned off by him. And Santorum is using his turn in the limelight now to demonstrate that he’s incapable of carrying a broad message and that as the party’s fall candidate he’d incite one politically toxic culture war after another.

It’s also testament to the undeniably positive trend in economic news since last fall. The unemployment rate has declined for five consecutive months and now sits at 8.3 percent, the lowest it’s been since the first full month of Obama’s presidency. And recent headlines have celebrated the revival of the auto industry and breakthrough stock market gains. As a result, Obama’s approval rating has been ticking up – and it will continue to do so as long as the good news keeps up. So while Will’s defeatism is premature, it’s also a preview of what we’ll be hearing from his GOP opinion leaders if their White House prospects continue to deteriorate.

This calls to mind the predicament the party faced the last time it tried to unseat an incumbent Democratic president, back in 1996. In the early days of that race, when memories of the GOP’s 1994 midterm landslide were fresh, it was taken for granted that Bill Clinton would be supremely vulnerable. But as the campaign progressed, a steady stream of good economic news restored his approval rating to health, while the poisonously unpopular image of Newt Gingrich and the Republican Congress worked against Bob Dole, the GOP nominee.

When Dole failed to score any points in the two October debates, his party gave up on him for good.

"I think most Republicans feel the presidential campaign is basically over, barring an act of God,” Bill Kristol said at the time.

Dole was essentially cut loose by his fellow Republicans as they pursued a stretch-drive strategy that warned about the dangers of giving Clinton a “blank check” in his second term.

"Electing Bob Dole president is not and has never been our only goal,” Haley Barbour, then the chairman of the RNC, said. “Our priority is to increase our majority."

Gingrich himself announced that “I think Dole won't lose by a landslide -- maybe by 5 or 6 percent."

Whether it was because of their strategy or something else, Republicans got what they wanted and retained the House and Senate on Election Day, even as Dole lost by 8 points to Clinton. The more Republicans come around to Will’s perspective, the larger the ‘96 example will loom over this year’s race.