During the Great Depression, printmakers -- many working for the WPA -- took American labor as their subject 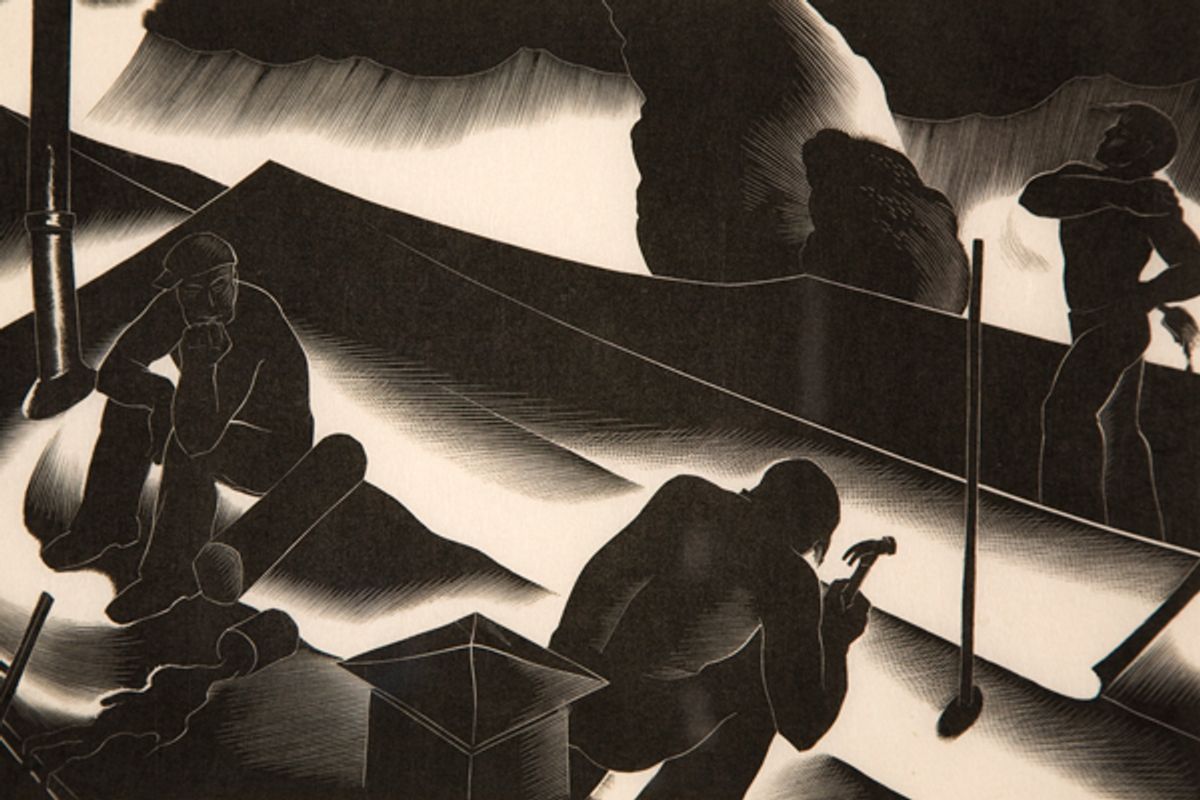 The bold block figures who inhabit some of  "At Work: Prints From the Great Depression's" most powerful images could easily illustrate familiar American folk tales -- stories of brawny Paul Bunyan and his mythical peers. But the protagonists they celebrate -- the working men and women of the Great Depression -- are far from fictional.

If pictures could talk, these prints, more than half of which were created under the aegis of the WPA, would preach the testament of the Depression-era workforce with eloquence.

Over the phone, Matthew Basso, director of the University of Utah's American West Center, spoke to me about the democratic qualities of printmaking, the government's role in determining the content of WPA-sponsored art, and the artistic glorification of work in the 1930s and '40s. Click through the accompanying slide show to see some of the exhibition's highlights.

How did this exhibition come about?

It stems from the discovery of a lost Federal Writers' Project manuscript titled "Men at Work," which was edited by Harold Rosenberg, one of the major cultural critics of the postwar era. Rosenberg worked for the WPA -- both the Federal Art Project and the Writers' Project -- in the 1930s and the early 1940s. He and others at the national office of the Federal Writers' Project saw "Men at Work" as the first book of a follow-on series to the American Guide Series. The idea was to focus not on the social world of workers, which had already been discussed in so much of the literature of the 1930s, but on the actual labor done by ordinary working Americans. (By the title, you can, of course, tell that they mainly meant male labor.)

The only instruction potential contributors received was, "You either have to have done the work yourself or seen it done." The leaders of the Federal Writers' Project hoped a new genre that would captivate the interests of the mass of working-class Americans might emerge. That didn't happen, but the 34 short stories they chose from writers who would become major figures in 20th-century American literature (such as Jim Thompson and Chester Himes), and from many others who comprised the rank and file of the Federal Writers' Project, are simply remarkable. They're fascinating ethnographic portraits ... of workers and the jobs they did during the Great Depression. World War II stymied the plan to publish "Men at Work," but I'm delighted that 70 years after it was completed, it will finally appear in print from the University of Utah Press under the title "Men at Work: Rediscovering Depression-Era Stories for the Federal Writers' Project. "

To honor Rosenberg, who had also chosen 20 prints to illustrate "Men at Work," and do a full-spectrum look at the Great Depression and at the theme of labor in our lives, both then and today, we decided, in conjunction with the publication of the book, to curate this exhibition. As part of this larger undertaking, we've also created, with the wonderful team of book artists at Red Butte Press, a letterpress book called "Wo/Men at Work" ... and we're doing a special edition of the journal Western Humanities Quarterly for which we urged contemporary writers to follow the same instructions Rosenberg gave to the writers in 1940: Write about work today -- but you have to either have seen the work or done it yourself.

We think so ... Besides the fact that (hopefully) we're coming out of the Great Recession, I think folks are really interested in work, and what they do. There have been a lot of popular nonfiction books lately about manual labor, and about working with our hands, and the question is: Have we made a huge mistake by becoming an information society? Have we robbed ourselves, not just of some economic basis, but of some sort of spiritual basis [for life]? I don't personally go that far, but there is this sense that we've lost the ability to work with our hands. That's what's kind of cool about this book, and about these prints: They really focus in on the act of work.

What do these prints tell us about the Great Depression that's different from what other contemporary works tend to show? You point out in the show's accompanying materials that much of the well-known Depression-era art isn't about work, but rather about the lack of it.

That's exactly right. Our memory of the Great Depression isn't people at work; it's people out of work. What's intriguing here is that if you look at the prints and other art of the Great Depression -- especially the work produced by the WPA -- it's as much focused, if not significantly more focused, on people doing labor. And more specifically, on both communities of workers and (especially) individuals. It's the first time ... that the worker is at the heart of popular culture [in America].

Of course, there are examples of workers in art prior to the 1930s. But a scholar at Yale named Michael Denning talks about the birth of the "laboring of American culture" in the 1930s: Everything is about work and workers. And these prints very much reflect that.

What's equally intriguing is that, while in some instances it's a celebration of work and workers, in other instances it's very much an acknowledgment that work can be difficult, dirty, challenging and dispiriting. In that way, it really fits with a larger 1930s imperative -- social realist art that's about documenting the experience of ordinary Americans.

What about the printmaking itself? As opposed to other media like photography, how was printmaking perceived?

It's certainly not as celebrated as other modes of art at that moment, or prior; what's celebrated is your classic oil painting or sculpture -- things like that. But there is a massive explosion of interest in printmaking in the '30s, because of its democratic sensibilities. Because prints were made in series of 25 or 50 (or sometimes even more), the federal government in particular ... got really excited about prints, because they could put them all across the United States. This was the charge of the Federal Art Project. It was very difficult to do that with oil paintings, or sculpture, obviously. You could also teach print classes -- people felt like they could make prints.

The second thing that's interesting about prints, which I think inspires greater attention to them in the '30s, is that the process of printmaking really feels akin to the processes of work. It's artisanal, and it's technical, and it's really quite remarkable. What the federal government does in the 1930s is create these separate communities of printmakers in cities across the country; for the first time, they can work together in a community -- and there's an enormous amount of innovation, especially with screen printing and other techniques.

How many of these works were specifically coordinated through federal programs? How many were made independently?

It's probably something like 70/30 -- 70 percent WPA prints and 30 percent non-WPA prints. But these artists crossed back and forth, which is quite interesting, between working as private artists and working for the Federal Art Project.

When they were doing art that was sponsored by the Federal Art Project, was the content of their work dictated? Or could they do what they wanted?

A little bit of both. The content was without question dictated, and so was the approach, to a certain extent. Some of the most famous names associated with the Federal Art Project -- Gorky, de Kooning and others -- are known for their abstract work, and abstract art is definitely at the forefront of serious art in the 1930s. But what the Federal Art Project wants is work that they think ordinary Americans will appreciate and understand, and that's social realist work. ...

For the prints specifically, what would happen is a printmaker ... would propose a print, or a series of prints, which would then be approved by the specific WPA/Federal Art Project board in their area. It would be vetted, almost like in an artistic competition or a peer-review process. Because of that, and because of the general documentary sensibility of the era, the prints are by and large social realist, although there are some important exceptions.

[At the time this art was created,] FDR called the ordinary working man the "forgotten man." But it's impossible to accurately talk about the 1930s as forgetting about men. Arguably for the first time, working men are not only at the center of culture, but ... also at the very core of American values. It's clear in policy, too: the WPA programs -- and the Federal Art Project is a slight exception to this -- are all about bolstering men as breadwinners. Indeed, legislatively, some women find themselves removed from jobs, based on the idea that it should be the man who is working and bringing home the bacon.

Another aspect of this, which is of course very much relevant today, is the question of the politics that are in these prints -- especially the working-class politics. We see the individual heroic male in this particular set of prints, but just as often you would see the collective heroic male, which was meant to embody unions. So at the heart of all of these images is a question about workers' power, gender, and about equity in society. By championing the working class, especially the working-class male, [this art] really bolstered FDR's effort to use legislation for social justice, including by championing the labor movement. But much of it also supported gender inequity in the world of work, and in society more generally. The relationship between work, gender, policy and art is one we need to continue to carefully consider -- and, often, fight to change -- in our own era.

"At Work: Prints From the Great Depression" will be on display at the Utah Museum of Fine Arts, in Salt Lake City, through May 6, 2012. The prints come from the collection of Marcia and Ambassador John Price.