How my ex became my brother

We were high school sweethearts, now we’re siblings. It’s weird, but I wouldn’t have it any other way 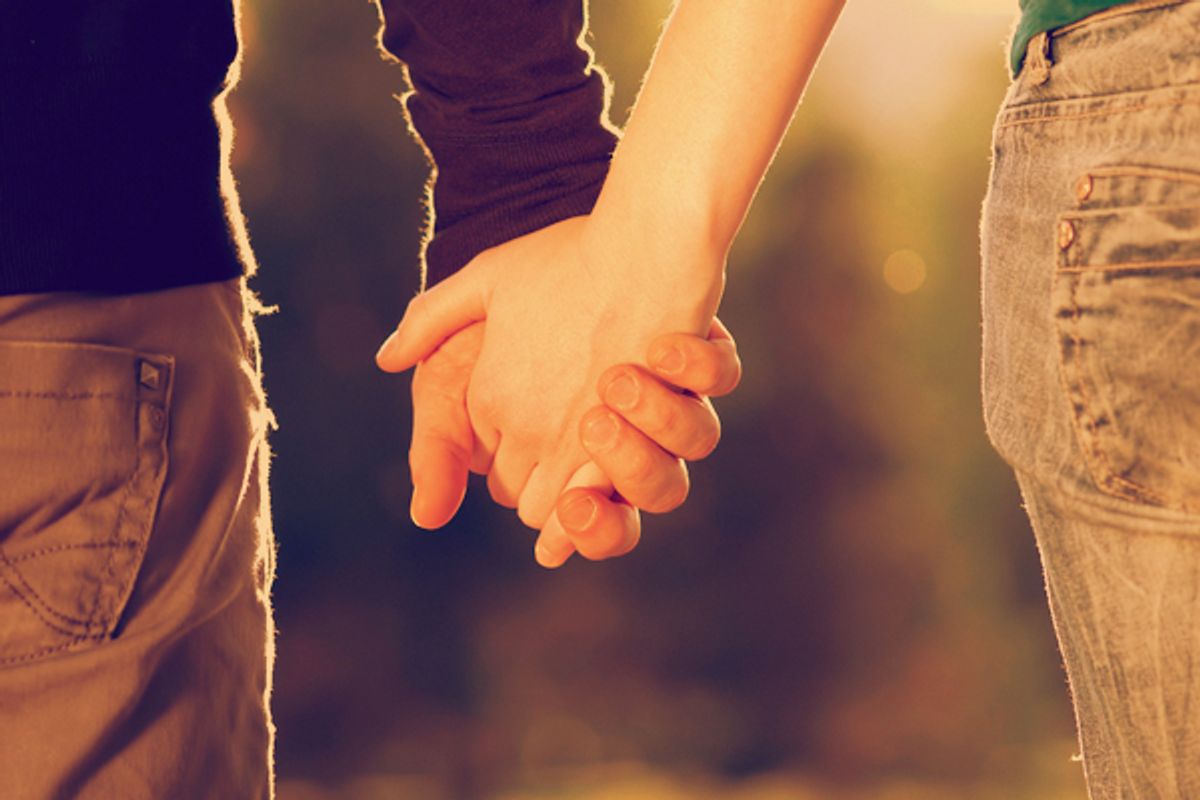 I met Snow -- who got his name thanks to a winter storm that arrived when he did -- in my high school biology class. In a move entirely out of character for me, I volunteered to be his lab partner. He was half-Japanese, half-Irish and had just moved to the Bay Area from upstate New York – all of which seemed very exotic to me. He wore baggy jeans, a black beanie and a white T-shirt, every single day; it was a minimalist, Zen hip-hop look.

Soon, we were cutting class together to sit in Starbucks or take BART to San Francisco's touristy Pier 39, where we would watch the barking sea lions and traipse through Madame Tussauds Wax Museum. We had a knack for finding secluded park benches perfect for make-out sessions. It wasn't just teenage lust, though: We were best friends, the sort who shared secrets with complete trust and understanding. We wrote each other poems and talked on the phone for hours -- you know the deal. It was first love.

At 18, I was sure that we would get married, have kids and live happily ever after. A decade later, I'm actually still certain that we'll be together forever, only in an entirely different sense. He's my brother now -- not by law or blood, but choice and circumstance. I swear it's much less "Jerry Springer" than it sounds.

During the day we occupied a fairy tale of teenage love, but at night Snow lived with his mom in a studio in a residential hotel in West Oakland. She had a drinking problem and was in and out of work, so he manned the graveyard shift at the hotel to support them both. Her drinking got worse, and he worked more. By the fall semester of his senior year, he dropped out of school. Soon enough, they had a blowout fight that ended with him sleeping in his car for several nights. He had nowhere else to go, so I begged my parents to let him stay with us for a couple of weeks.

At first, they were none too thrilled to have my boyfriend living with us. We were given separate rooms and went to bed apart, but one of the rooms was always unoccupied by morning time. As my mom puts it, “You slowly wore us down.” Gradually, she stopped seeing him as a minor threat -- the boy her daughter was clearly having sex with -- and more as a vulnerable kid himself.

She helped him work toward getting his GED while I finished my senior year of high school. Then she helped him get into a local art school. He chose graphic design as his major, which was the business my mom had been in before retiring. I remember coming downstairs the morning his first-semester final project was due to find them hunched over the kitchen table, trying to cope with a last-minute crisis. He was ready to throw in the towel, but she patiently talked him through it. It was just one of many moments where she was a novel influence of calm and stability.

My mom tells me, “It wasn’t so much us wanting to help him as it was that we started to love him,” she says. “He was part of our family. It doesn’t happen in a day, it happens in all those small moments.”

I suppose the same is true of a breakup -- in this case, moment by moment, he became more like a brother, and less like a boyfriend. We split when I decided to move into the dorms; and when I started seeing someone new, we had an explosive argument that ended with us cutting off all contact.

Well, except for the fact that he still lived with my parents.

It was an unusual and painful predicament: Going through your first breakup is hard enough – just imagine doing it while your ex is living with your parents (or, from his perspective, while living with your ex's parents). He made himself scarce when I visited on the weekends, but his presence was still there: a sweat shirt left on the couch, a pair of shoes by the door. I was even more ever-present, though: Nearly every flat surface in the living room had an image of me from my childhood. It certainly wasn't the ideal scenario for either of us -- but he had nowhere else to go.

At times, I felt like they weren't giving him the tough love that he needed to really turn his life around. Of course, this was influenced by my own sense of jealousy: I was off at college – and hating it -- while he was enjoying all the TLC that my mom had to offer. I was an only child, I'd never had to share my parents before. It was my first brush with sibling rivalry: I took any compliment that my mom paid to him as a potential threat. What if he became the favorite child?

After college, as I got in and out of new relationships, I had to explain the situation. "Sure you can meet my parents, but, um, here’s the thing: My ex-boyfriend lives with them.” It sent one guy running for the hills.

All of this was compounded by the fact that we weren't even friends anymore. I was sharing my parents with someone who wanted nothing to do with me.

Gradually, though, that changed. After a couple of years of only hearing about his life through my parents, and vice versa, things started turning around for him -- and for us. He got a job, an apartment and a girlfriend. We started talking again like friends who speak a rare but common language -- not frequently, but whenever we'd run into each other at a get-together at my parents' house. Fast-forward a couple of years and now I can invite him over for dinner with my boyfriend (and they both can’t tell me enough how much they like hanging out together). We schedule joint dinners with my parents just like (I hear) regular siblings do.

The romance is no longer there, but the sense of home and belonging still is. We didn't share our entire childhoods, but we did grow up a good deal together.

This isn’t to say that there aren’t moments of pseudo-incestuousness. After spending a weekend away with him and my parents at my cousin’s wedding, he said something worthy of mock outrage and I started to exclaim, “Babe!” -- what I used to call him and now call my current boyfriend -- but only made it two letters in. All it takes is a misfired synapse and the distance between then and now collapses.

But that awkwardness is nothing compared to what has been gained. When I found out about my mom's terminal cancer diagnosis two years ago, Snow was the first person I called. There was no question in my mind that he was the one I needed to talk to. He could identify with my grief better than anyone else. Of course, our relationships with her are profoundly different, but there is that common experience of having been nurtured and loved by her.

My ex-boyfriend became my brother. This isn't what I'd imagined all those times when as a child I'd begged my parents for a sibling, but I'll take it. Life is constantly throwing curveballs, always turning expectations on their head: I did find a "life partner" at 18, just not the kind I thought. It's not the first time love, and family, has changed unpredictably over time.