Democrats suddenly have a Maine headache 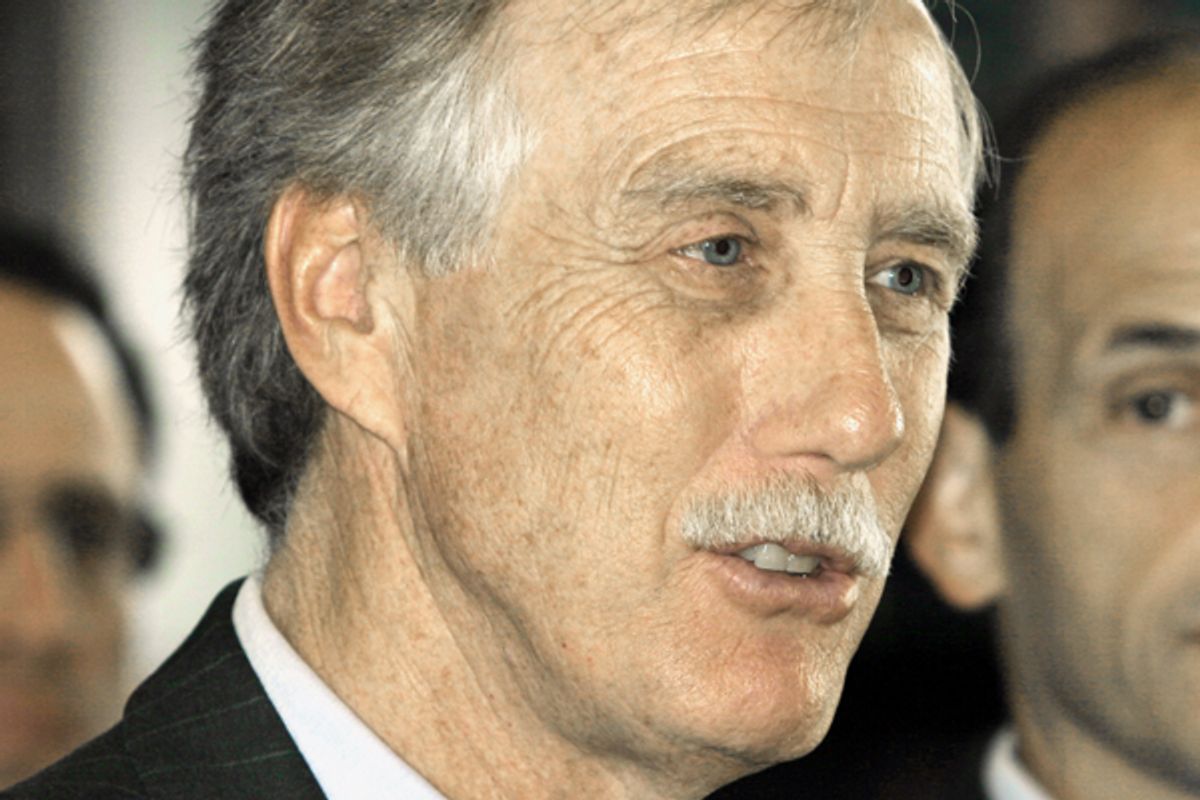 When Olympia Snowe made her surprise retirement announcement last week, Democrats across the country rejoiced. The three-term Republican had been the clear favorite to win reelection, but given Maine's partisan bent, her Senate seat suddenly seemed theirs to lose. The national implications were significant: a Democratic pickup in Maine would force Republicans to gain a net total of five seats this fall in order to recapture the chamber (or four if the GOP presidential nominee wins).

But now things are a lot more tricky, with Monday's news that Angus King, who attained massive popularity as governor from 1995 to 2003, is set to enter the race as an independent. In most states, a third-party Senate candidacy would be a long shot, but Maine is probably the most independent-friendly state in America. Two independents -- King and James Longley, who served from 1975 to 1979 -- have been elected governor since the 1970s, and Eliot Cutler came within 2 points of becoming the third in 2010. The state is also one of only two in which Ross Perot finished second in 1992.

So King, who was elected in 1994 in a squeaker and reelected in a 40-point rout four years later, absolutely could win. If he does, control of the Senate could end up resting on his decision. And even if he doesn't win, King's presence could alter the math by draining votes disproportionately from one of the major party candidates -- presumably the Democrat, given his cultural liberalism.

Thus, there's now reason for Democrats to worry. But King's entrance doesn't have to be bad news for them. Here are four ways his political comeback might play out:

1. The Democrats' nightmare -- all over again: In 2010, Maine elected one of the most conservative governors in America, Paul LePage. A blunt-spoken favorite of the Tea Party movement, LePage rode his grass-roots support to a stunning upset in the GOP primary. Under more ordinary circumstances, that's where his luck would have run out, and LePage's provocative, far-right antics would have scared off swing voters in the fall and made him the Maine equivalent of Sharron Angle. But with Cutler, a moderate former Ed Muskie aide, waging a well-funded independent bid, the anti-LePage vote was split, and the GOP nominee was elected with just 38 percent of the vote.

Republicans don't have much of a bench in Maine right now, although Attorney General Bill Schneider is apparently set to run. Democrats, meanwhile, are most likely to nominate Rep. Chellie Pingree, a progressive favorite who is clearly interested in running and who would be the early favorite to beat the other Democrat eying the race, former Gov. John Baldacci. In a one-on-one race, Pingree would be well-positioned to win, especially since 2012 is a presidential year. The dread scenario for Democrats is that King, an RFK volunteer in his youth who mixed cultural liberalism with a business-friendly economic platform in his gubernatorial years, would play the Cutler role, draining votes from Pingree (or whomever the Democrats nominate) and opening the door to a GOP victory.

This, in turn, raises all sorts of questions, like: Could King's decision prompt Pingree to reconsider and instead seek reelection to her safe House seat? Would Baldacci still be interested? Would Democrats have a strong option if they both back out? And is there a scenario in which Maine Democrats -- like Connecticut Republicans with Joe Lieberman in 2006 -- conclude that their best bet is to rally (however informally) around King?

2. King realizes he's actually a Democrat: For now, King's place on the national political spectrum is a mystery. He's been out of politics for nearly a decade and hasn't weighed in much on what's been happening in Washington. Presumably, he'll be forced to fill in most of the blanks during the campaign. Maybe he'll even be pressured to disclose which party he'd side with to run the Senate.

The optimistic scenario for Democrats is that King wins and become the senator Snowe could have been but refused to be. In his public comments about the race, he's sounded the same themes Snowe stressed in her departure announcement, lamenting D.C.'s hyper-partisan culture. As the Bangor Daily News reported last week:

King, who served as governor from 1995 to 2003, said the partisanship and divisiveness that prompted Snowe to drop her re-election bid would be his major reason for running. But the question he is asking right now is whether there was some way that he, as an independent, could help bridge that two-party gap and help change a broken system.

As others have noted, though, Snowe has a long-standing habit of ultimately returning to the GOP fold whenever a major issue with a clear partisan divide emerges. And when the Tea Party crowd began flexing its muscle in her state and nationally in 2009 and 2010, Snowe's voting record moved dramatically to the right. Would King feel this same pressure -- or would he, say, have more freedom to ignore the GOP's filibuster of a perfectly qualified nominee to run the Consumer Financial Protection Bureau?

Again, King's politics are hard to discern. But his roots are on the left -- campus organizing for RFK, legal aid work that brought him to Maine in 1969, a stint on the D.C. staff of Democratic Sen. William Hathaway in the 1970s. And while he supported George W. Bush in 2000 after getting to know him through the National Governors Association, King turned into an outspoken critic of the president and went on to endorse John Kerry and Barack Obama.

"I think (Bush) surrounded himself by ideologues," King said in 2004. "And I think Dick Cheney has become a dark force I didn't anticipate."

So if King wins, maybe he'll find that the Republican Party he worked for and found common ground with in Augusta doesn't exist in Washington, D.C., anymore. And unlike Snowe, maybe he'll vote that way, too.

3. King the closet Republican: Then again, King's politics have evolved over the years. Hathaway has said that King didn't quite share his liberalism, and King went on to start an energy consulting company and make a small fortune in the 1980s and early '90s. When he ran for governor in '94, he did so as a Paul Tsongas/Bill Weld- type -- culturally liberal and adamantly pro-business.

"I still want to help people in a just society," King said at the time. "I've come to the conclusion that the best engine for that is free enterprise."

And while he did turn on Bush and endorse Democrats in the last two presidential elections, King made clear that the deficit was one of his top concerns. "Anybody under the age of 35 who votes for George Bush ought to have their head examined," he said during the '04 race, "because they're going to be paying these bills for the rest of their lives." He also said that Bush had "contributed significantly" to dividing the country and that he felt "betrayed" because of it.

These are the same themes the GOP now presses against Obama -- that he's run up the debt while dividing Americans. King could be the kind of moderate who sees the hollowness of this attack, but he could also be the kind who thinks the GOP is on to something. In one of her signature moments, Snowe ultimately decided to vote against healthcare reform in 2010 because she believed the process had been too partisan -- giving her Republican colleagues further incentive to treat every vote as a partisan litmus test. For all we know right now, an independent Sen. Angus King might see it as his duty to be just as hostile to the idea of passing major legislation on party-line votes.

4. Democrats win anyway: It's been a while since King's name was on a Maine ballot, and federal races can be different from gubernatorial contests. So it's possible he won 't gain the same traction he did in his previous campaigns -- and that, if the election approaches and he doesn't seem to be in contention, King's support will crash. In other words, Democrats can still win this race with their own candidate. And again, since King's views on national issues are still cloudy, it's not out of the question that he'll end up being a drain on the GOP too.