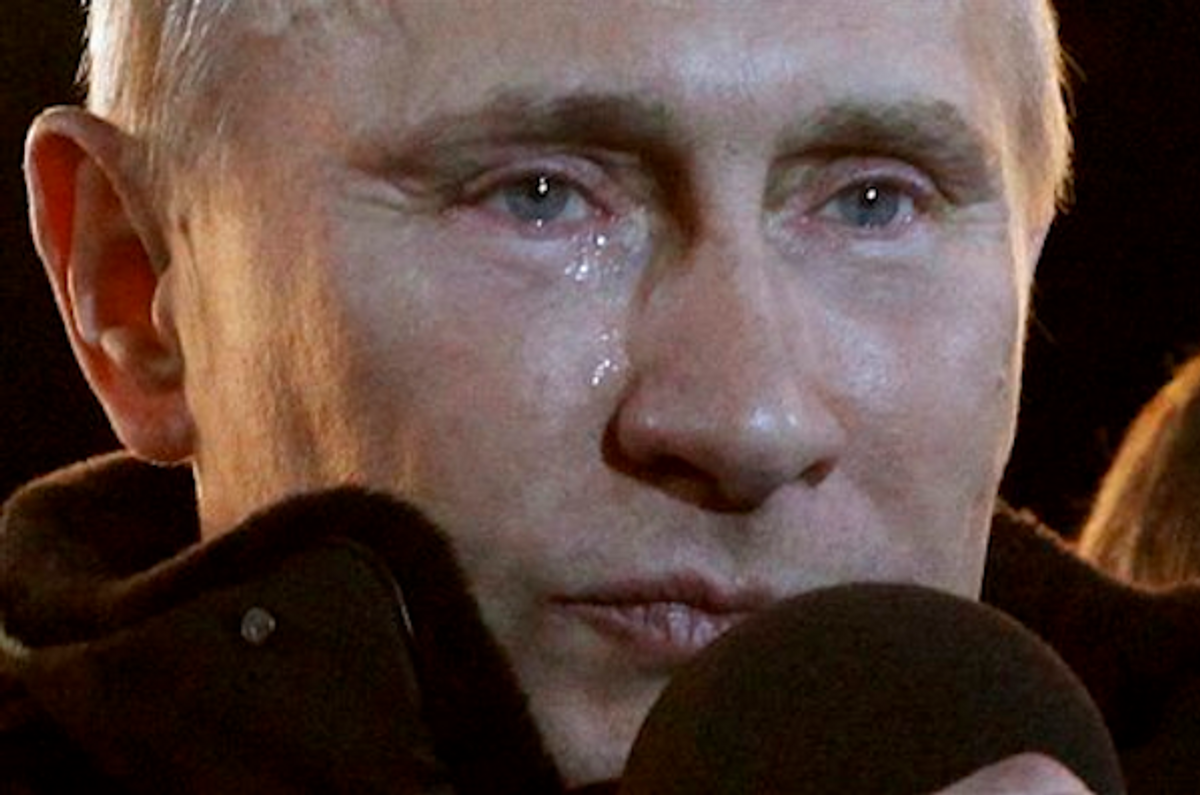 MOSCOW —Prime Minister Vladimir Putin was moved to tears as he accepted his victory in the presidential election on Sunday.

At a massive rally held in his honor by supporters on Manezh Square, just outside the Kremlin, Putin praised Russians for their mature political thinking and independence in a vote that observers warned had been tainted by fraud.

“It was a test,” he said. “We showed that our people are really capable of differentiating the desire for something new from political provocations that have only one goal — to destroy Russian sovereignty and usurp power.”

His voice shook and a tear streamed from his eye. He was so overcome that he even stuttered. “I call for everyone to unite for the interests of our people and our homeland.”

“We won,” Putin said, stabbing the air with his index finger. “Glory to Russia!”

The crowd, made up of mostly men, cheered, waving flags and banners.

Putin received 64.7 percent of the vote, according to preliminary results, allowing him to win outright and avoid a runoff election.

Getting the necessary 50 percent to avoid a runoff would have been impossible without rigging the elections, experts said.

About 20 percent of the vote came from what is known as the "administrative resource," said Dmitry Oreshkin, a political analyst and a member of the Presidential Council for Human Rights.

Those are either votes from employees of government-funded institutions whose supervisors report to Putin or his subordinates, or assistance with voter fraud, such as stuffing ballots, Oreshkin said.

Some schools pressured teachers to vote for Putin, threatening to fire them if they didn’t, according to media reports.

Ivan Grachev, a deputy of the state Duma, or parliament, who is also a member of A Just Russia party, an opposition group that fielded a candidate in the election, said about 15 percent of Putin's votes come from the "administrative resource," the Kommersant newspaper reports.

"It would be good for the country to have a runoff, but it won't happen," Grachev told Kommersant Sunday.

Last month, Putin said he would be ready for a runoff election, but that it might destabilize the country.

The victory can be seen as a blow to the budding opposition movement, which brought thousands of Russians to the streets in recent months demanding reform.

Putin has already served two terms as president, before stepping aside in 2008, in accordance with the constitution. For the past four years he has been prime minister to President Dmitry Medvedev.

Pro-Putin rallies were held in several locations in central Moscow. Nearly 400,000 police, many brought in from neighboring regions, descended on the city streets.

Putin’s victory came as no surprise to most. The prime minister is still popular, but a December parliamentary election, which observers said was riddled with fraud, led many to worry about vote-tampering Sunday.

Several Russians leaving polling stations in Moscow said they expected Putin to win, even if they didn’t vote for him.

Lyubov Gorozhanina, 52, voted for Mikhail Prokhorov, a billionaire challenger, because she said Russia needs something new.

But she did not think he had a chance against Putin.

“Putin will win,” Gorozhanina said. “I heard that it’s [voting] all a procedure, empty. But I am still hoping that it will mean something.”

The presidential election was the most observed in Russia’s history. Video cameras had been installed in nearly 100,000 polling locations throughout the country, and the elections attracted an army of tens of thousands monitors.

After the parliamentary elections, Sergei Porkopov, 27, signed up to oversee the presidential elections at a polling station in Northeast Moscow.

“I wanted to see for myself whether the elections are fair,” Porkopov said. He said he did not notice any violations in his district by early Sunday afternoon.

An initiative to keep an eye on the election monitors came from the government, said Andrei Buzin, head election monitor of independent election watchdog Golos, which is based in Moscow.

Voronezh-native Petr Savropov, 26, said after the Dec. 4 parliamentary elections he wanted to see who was telling the truth. “Was it all faked to destabilize the country?” Savropov said. He signed up Friday to monitor the observers at his polling station in Voronezh, a city in southwestern Russia.

Despite the increased monitoring, or perhaps because of it, reports of vote-rigging were widespread.

Golos reported about 5,000 election fraud complaints nationwide. The biggest incidence of alleged fraud came from “voting carousels,” or when voters are bussed from polling station to polling station to vote repeatedly with absentee ballots.

Four election monitors said they were beaten by police in the municipal building of Zheleznodorzhny, a hard-bitten Moscow suburb with a history of election fraud.

Golos monitor Elizaveta Klepikova said a group of men hit her and the other three observers inside the lobby of the government building after they came to complain about being asked to leave the polling place they were watching. She suspected they were plainclothes policemen because they were let into the building by police, who shut the door after them.

She had a bruised neck and her glasses were cracked in half. She said the men took her camera.

Anton Ivashchenko and Eldar Dadin, two volunteers who monitored the election on behalf of Prokhorov’s election committee said the men beat them, then forced them in a car and drove them around before letting them out. Their belongings were confiscated, including a laptop.

Golos plans to file a complaint about the alleged beatings with the police.

Police said they are not aware of any beatings, news agency Interfax reported.

"Police did not receive any complaints from monitors or members of social organizations, that were allegedly beaten on one of the polling places in Zheleznodorozhny," Moscow region police spokesman Yevgeny Gildeyev told Interfax Sunday.

The monitors left the Zheleznodorozhny polling station after staff asked them to leave for inappropriate filming and taking photographs, Gildeyev said.

Liliya Shibanova, who heads Golos, said she received reports of arrests of observers in Tula, Tver and Nizhny Novgorod.

After the polls closed, throngs of men carried Russian tri-color flags through the night streets leading to the Kremlin. They were making their way to Putin’s victory rally in the Manezh Square.

Official estimates clock the number of attendees at over 100,000. Many of those at the rally were bussed in from neighboring and faraway regions, media reports said.

A manager from a Moscow suburb, who only gave his name as Andrei, stood in the crowd in Manezh Square. Soft snow fell in the bright lights.

Early preliminary election results blared over the loudspeakers — 61 percent for Putin, 18 for Zyuganov, 8 percent for both Prokhorov and Zhirinovsky, and 4 percent for Sergei Mironov, the leader of A Just Russia, an offshoot of Putin’s United Russia.

Andrei said he voted for Putin. “We won,” Andrei said in a flat voice, his light blue eyes staring straight ahead. “I’m in a good mood,” he said, barely cracking a smile.