As Netanyahu pushes for war, Israel starts to balk 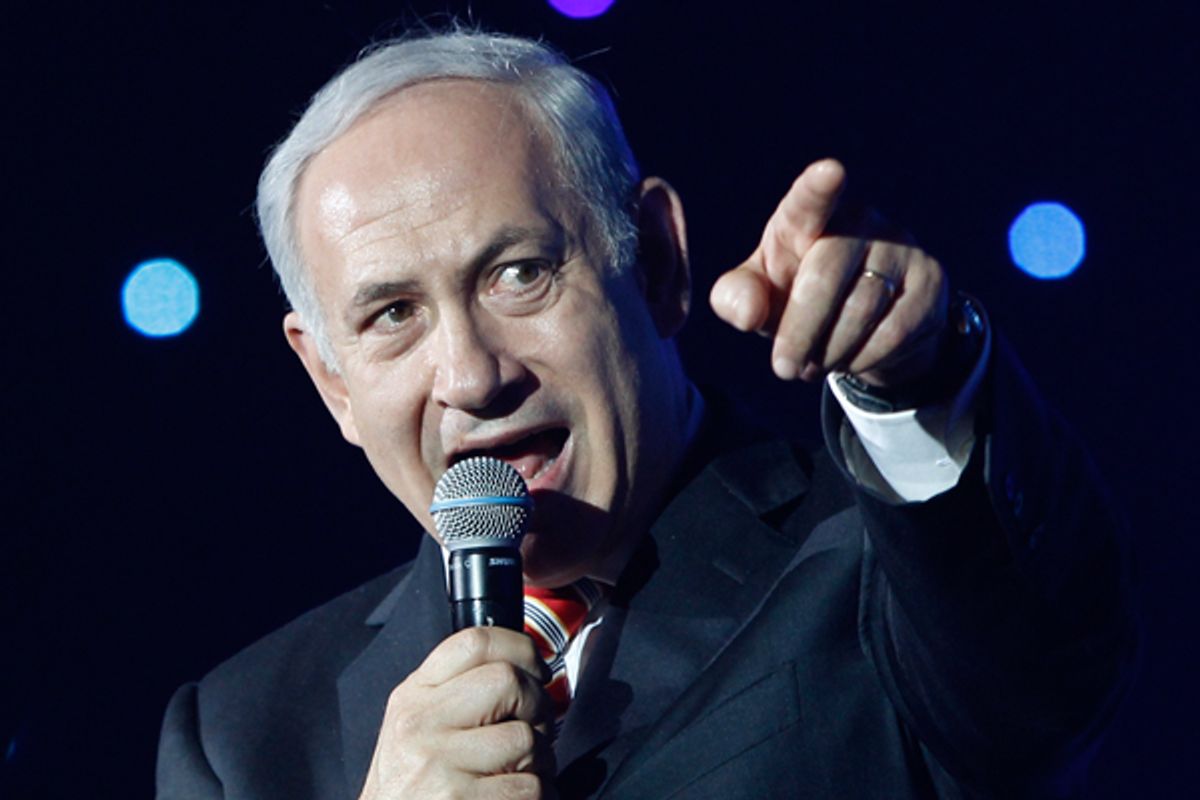 JERUSALEM – To Americans, Israeli Prime Minister Binyamin Netanyahu must look like some invading giant. Backed by an army of AIPAC lobbyists and Republican presidential candidates, he came to Washington this week and put President Barack Obama on the defensive, using threats of imminent war on Iran to coerce his host into threatening his own war on the Islamic republic, albeit further down the road than Netanyahu would like.

At home, however, Netanyahu is not so strong, not as a prospective wartime prime minister, at any rate. Having no formidable rival, he is secure in office, but his public image, more and more, is that of an indecisive, deceitful, endlessly suspicious leader who’s under the sway of his wife, Sara. In a series of scandals in the prime minister’s office, the last one surfacing just before he left for Washington, he comes off like a weaker version of Richard Nixon.

What’s more, signs are that he doesn’t have the Israeli public behind him for a unilateral attack on Iran, and his military/intelligence chiefs, along with the great majority of his cabinet ministers, are showing no eagerness to board the war train. Just three weeks ago Israel seemed to be leaning hard toward war. Since then, though, there’s been a softening of Israel’s posture (if not Netanyahu’s) – due to the scandals, rising American opposition to a solo Israeli attack, and the sinking in to the public that the war they’ve been hearing about for years may actually be at hand.

So the leverage Netanyahu purports to wield over Obama – a readiness to attack Iran in the coming months unless he is satisfied that the president will do so himself by an acceptable deadline – may not be all it seems. It’s questionable whether the Israeli leader, whatever his intentions, has the necessary domestic backing to start such a daunting war in the near future, especially with the president promising repeatedly that if all else fails, America will do the job.

In his AIPAC speech, Obama said the best approach is to “Speak softly. Carry a big stick.” Netanyahu, given his diminished leadership stature and the fretful mood at home, could be doing just the opposite.

On the weekend that Netanyahu left for the U.S., the top story in Yediot Aharonot, Israel’s largest selling newspaper, was built around an exhaustive interview with Uzi Arad, who was Netanyahu’s most loyal lieutenant and head of the National Security Council until he was forced out a year ago. Arad describes a prime minister’s bureau in Jerusalem brimming with intrigues, where aides scare the boss about the supposed schemes of their rivals – “and Netanyahu is easy to scare,” says Arad. He goes on to say that Sara Netanyahu accused him of being an “informer,” and complained to him through a prime ministerial aide that his secretary was a “leftist.”

In the following edition of Yediot, Nahum Barnea, co-author of the story and the country’s most prominent journalist, said that during the series of interviews with Arad, what troubled him was “essentially one question: Is Netanyahu, as revealed in this interview, a man whom Israelis can trust with the decision of whether to attack Iran or not?”

Netanyahu replied to Arad’s charges in lordly fashion, citing the proverb: “A man shall not be judged on words spoken in time of distress.” To this, Barnea wrote: “But a man shall be judged on weakness of character, on the panic that strikes him every time his wife gets upset, on an absence of leadership, on hypocrisy and lack of credibility. These are the issues that should worry every [Israeli] on the way to a decision on Iran.”

Amir Oren, national security columnist for Ha’aretz, agreed, arguing that in view of Arad’s “proximity to the events and his reliability,” his story indicates “that Israel, on the verge of an adventurous war, is in untrustworthy hands.”

On the same day that Yediot published Arad’s revelations, Ha’aretz’s lead story was that Netanyahu had been questioned for hours by the powerful state comptrollers’ office over the scandal known as “Bibi-Tours,” in which the Netanyahus allegedly took extravagant trips abroad on the tab of the prime minister’s acquaintances and donors. As in past entanglements, Netanyahu said politically motivated journalists and other enemies cooked the whole thing up.

The Arad and Bibi-Tours affairs come less than two weeks after the “Eshel affair,” in which Netanyahu blamed three top aides for going first to law enforcement instead of to him with a secretary’s accusations of sexual harassment against his chief of staff (and his wife’s close confidant), Natan Eshel. The three reportedly said law enforcement authorities instructed them to keep it secret from their boss for fear he would tell Eshel and undermine the investigation. In a public statement upon Eshel’s resignation under censure, which he tendered to avoid prosecution, Netanyahu praised him for his “dedicated service.”

The character issue – Netanyahu’s duplicity, disloyalty, arrogance and rashness, as testified to by numerous former colleagues and supporters – went a long way toward losing him the 1999 election after three years as prime minister. During that term, cabinet minister Dan Meridor said upon quitting his post that Netanyahu had fostered a “culture of lies.” Cabinet minister Benny Begin (son of Menachem Begin) said Netanyahu was “shameless” in his dishonesty. (Meridor and Begin, however, are ministers in the current cabinet.)

Amnon Lipkin-Shahak, military chief of staff during most of Netanyahu’s first term, said upon retiring from duty and entering politics that Netanyahu was “a danger to Israel.” He and another cabinet exile, ex-defense minister Yitzhak Mordechai, said they’d had to rein Netanyahu in from undertaking untold “adventures” – just as retired Mossad chief Meir Dagan said he and other military/intelligence chiefs had to do with Netanyahu (and his alter ego Defense Minister Ehud Barak) during the current term.

“I think Netanyahu, as he’s been depicted lately, is still a danger – in many respects,” said Lipkin-Shahak over the phone. “Time after time he shows himself to be someone who has difficulty making a decision, as a prime minister who gives in to pressure. He used to say that he remembered seeing the British soldiers in their red berets when he was a child in Jerusalem. The British left Jerusalem before he was born. I’m not comfortable with a prime minister like that.”

Lipkin-Shahak added that to the best of his knowledge, the current chiefs of the military and intelligence services oppose an attack on Iran – which has been reported repeatedly about the heads of the military, military intelligence, Mossad and Shin Bet, and has never denied by any of them.

This brings up the other crucial weakness in Netanyahu’s march to war that’s been coming into focus: The public doesn’t want Israel to attack Iran on its own. A poll published last week by University of Maryland Prof. Shibley Telhami and the Dahaf Institute, Israel’s leading polling agency, found that 81 percent of the public opposes an Israeli strike on Iran without American support. The reason is clear: fear of retaliation. Fifty-one percent of those polled thought the ensuing war would last months or years, compared to 37 percent who expected it to last weeks or days. Sixty-eight percent thought Hezbollah, with its estimated 50,000 missiles, would join Iran in striking back at Israel.

For the last few years, this country has been almost free of terror, while the economy, at least for the top half of the population, has never been better – and Israelis are in no hurry to give that up. Military intelligence chief Aviv Kochavi made headlines recently with his statement that 200,000 enemy missiles are pointed at this country at any given time; the message seems to have sunk in.

In November, after hearing an estimate from somewhere that 50,000 Israelis would be killed in the blowback from an attack on Iran, Defense Minister Barak tried to calm the public in a radio interview. “There is no scenario for 50,000 dead, or 5,000 dead -- and if everyone stays in their homes, maybe not even 500 dead.” he said. No sigh of relief was heard over the land.

Among the 35,000 residents of Dimona, the Negev desert town near Israel’s nuclear reactor, which is a natural target for Iranian retaliation, a lot of people are naturally worried about the day after an Israeli attack.

“It’ll be the end of the world. Iran, Syria, Hizbullah, Hamas, everybody will be against us,” said Meir Turgeman, an elderly man sitting in the city square.

Dimona’s mayor, Meir Cohen, supports an attack if sanctions and diplomacy don’t stop Iran’s nuclear program, and when I asked if he was concerned about the consequences for his town, he replied: “I think that today, all of Israel is one big target.” Not much relief there, either.

In his remarks at the White House before meeting with Obama on Monday, Netanyahu emphasized Israel’s absolute right to be “master of its own fate” – i.e. to bomb Iran’s nuclear facilities even if America disapproved. That evening, in his speech to the AIPAC convention, the prime minister rolled out yet another Holocaust analogy to drive home his point. “Never again will the Jewish people be powerless and supplicants for our fate and our very survival. Never again.”

Netanyahu has been talking like this his whole life; he was bred on this worldview, it’s in his genes. Israel’s prime minister is a true believer, and if he could start a war with Iran just on his own ideological zeal, the attack might have been launched a while ago. But he will need a lot more than zeal to overcome the opposition of his war council, of many in his cabinet, of the U.S., of the rest of the world, and finally of his own people.

It would take an amazingly strong leader to pull that off, and Bibi Netanyahu does not fit the description, to say the least. Which means there’s reason for hope after all.