Putin's solid victory, disputed or not, may dampen the protest movement in Moscow 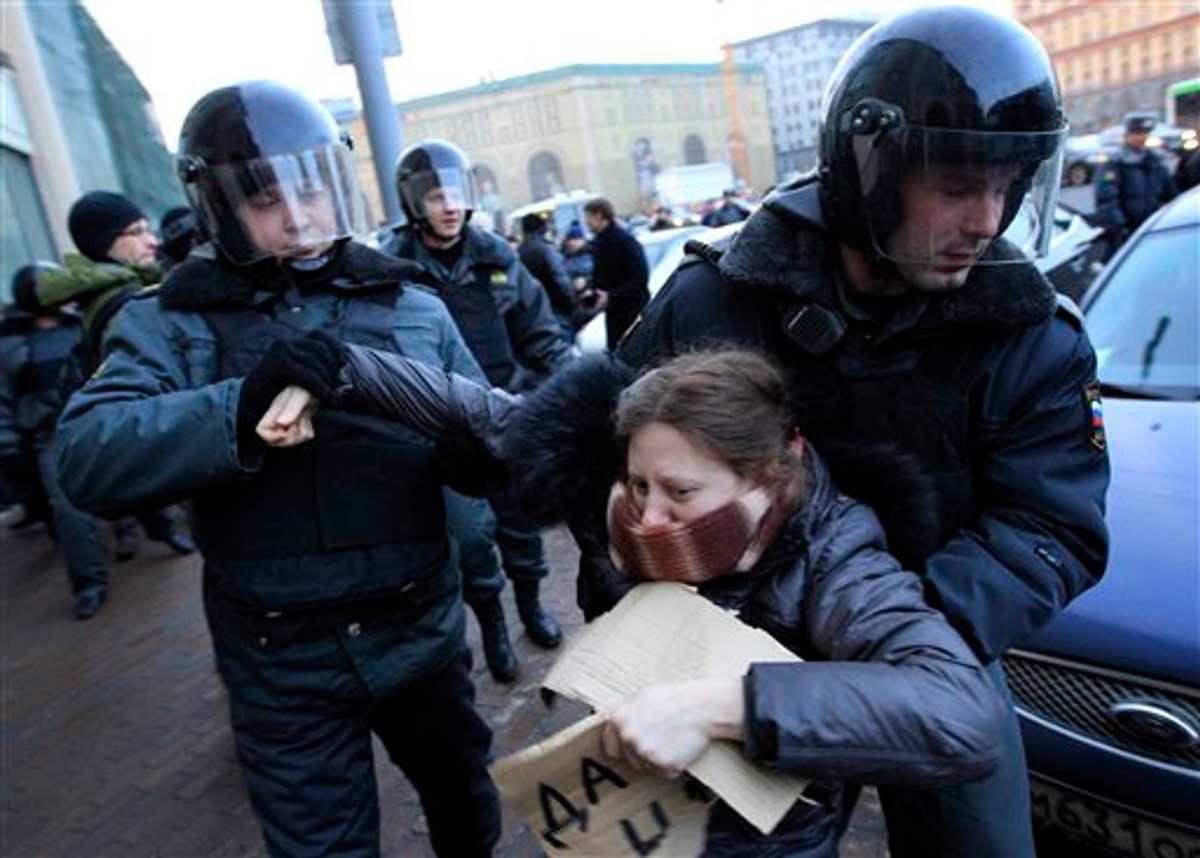 But in a sign that the movement may be losing momentum, Monday’s gathering was significantly smaller than protests before the vote, which awarded another presidential term to Prime Minister Vladimir Putin.

About 20,000 gathered in Pushkinskaya Square Monday night to protest Vladimir Putin’s victory in the presidential elections, which an election watchdog has said was rigged.

Protesters chanted “Russia without Putin,” but displayed noticeably less zeal than the previous protests in Bolotnaya Square and Sakharov Prospekt.

Some waved flags and held banners. One read, “Moscow Doesn’t Believe in Tears,” referring to Putin’s tearful victory speech and a title of a popular Russian film.

Opposition leader Sergei Udaltsov, one of the first speakers at the rally, said that he would not leave the square until Putin leaves the Kremlin and urged others to stay with him.

About 1,000 supporters, including celebrity opposition activists Alexei Navalny and Ilya Yashin remained after the end of the rally.

Opposition leader and State Duma deputy Ilya Ponomarev asked them to put away posters and banners and stop yelling out slogans.

Instead they would stay in the square and talk, he said. Then police, some in riot gear, arrived and began to disperse people. Some were hit with truncheons.

Navalny, Udaltsov and Yashin were arrested along with about 250 people, police said. Ponomarev escaped arrest because of his status as a politician, he said. He added that he hoped the mass arrests would have a mobilizing effect on the public.

The opposition is planning to hold another mass rally on March 10.

But it may be increasingly tough for the movement to garner support.

“It was difficult to come here after yesterday,” said Mikhail, 53, who did not want to give his last name. “There aren’t so many of us here.”

Another protester, lawyer Kirill Toporov, 26, said the government will clamp down on the opposition in the near future.

“I will say a negative thing — there will be repressions,” Toporov said. But his friend, entrepreneur Boris Prevezentsev, 28, had a positive outlook.

“The harassment will get people to react more actively to this government,” Prevezentsev said.

Putin was officially announced the winner earlier Monday, with over 63 percent of the vote.

The Central Election Commission denied all allegations of vote rigging.

“Honesty comes from people. Web cameras and clear voting bins only help organize open, transparent and honest elections, like the ones we had in Russia. This type of elections only exists in Russia now,” said head of the Central Election Commission Vladimir Churov, the Interfax news agency reported.

After a vocal opposition movement, triggered by alleged election fraud in the Dec. 4 parliamentary election, mass rallies erupted in the streets of Moscow and other Russian cities. The protesters demanded new elections, freedom for all political prisoners and the resignation of Churov.

While most realize that those demands are not likely to be met any time soon, protesters made some gains with the government.

Bills recently submitted for review at the State Duma will make it easier to register new political parties. The bills are a direct result of the mass protests, said opposition leader Boris Nemtsov.

Political reform is inevitable during Vladimir Putin’s next six years as the head of Kremlin, experts said.

The government will control opposition with the “whip and cookie” method, said Alexei Mukhin, the director of the Centre for Political Information in Moscow. Those who cooperate will get good positions in the government. Those who don’t will be persecuted, Mukhin said.

The people that come out to the anti-government protests are ordinary people who are fed up with the current government and want to see a higher standard of living and more opportunities, said independent political analyst Leonid Radzikhovsky.

But the movement still lacks a strong leader.

A few possibilities: blogger and anti-corruption activist Navalny or Vladimir Ryzhkov, the leader of the unregistered People’s Freedom Party. They have four years until the next parliamentary elections to organize a party and become systemic opposition.

As for Monday's mass arrests, Radzikhovsky said that the police crackdown only made the opposition's cause more powerful.

"They are writing the myths of the opposition with their truncheons," Radzikhovsky said.