The writer behind HBO's "Game Change" 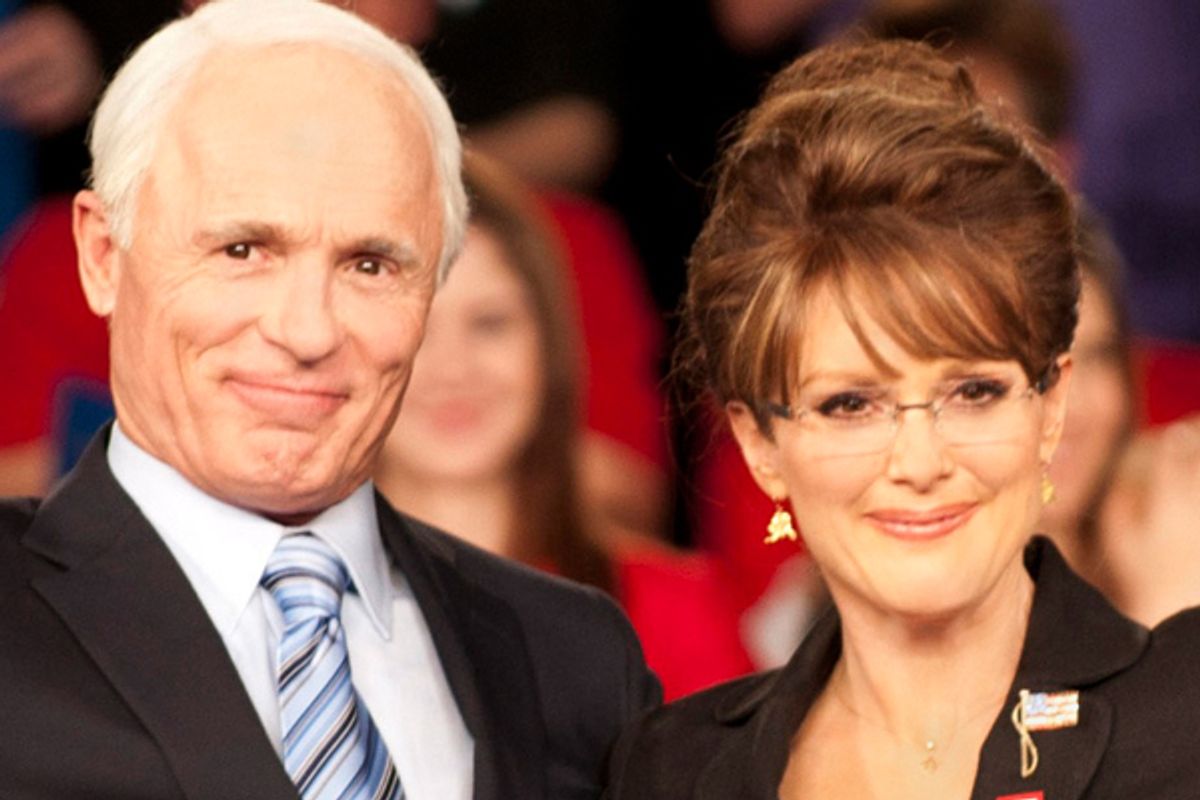 In recent years, Danny Strong has become the go-to guy for political drama for HBO. He's gotten an Emmy nomination and Writers Guild of America award for his screenplay for the 2008 “Recount,” about the 2000 presidential vote in Florida. And now he's gone back to work with that film’s director, Jay Roach, on the anticipated adaptation of the controversial bestseller “Game Change,” which premieres on HBO Saturday. "Game Change" chronicles Sarah Palin's rise during the 2008 presidential race and features a superlative performance by Julianne Moore as Sarah Palin, along with Ed Harris as John McCain and Woody Harrelson as McCain’s senior strategist Steve Schmidt. It is already getting pushback from Republicans, who are calling it a political-year propaganda film.

Sarah Palin is introduced on about page 350 of John Heilemann and Mark Halperin’s “Game Change,” a book that covered the 2008 Obama, Clinton, McCain and Edwards races as well. Was it always going to be just about her?

It was the director Jay Roach’s concept to just do the Palin story, and I agreed that I thought that was the best approach, for various reasons. One, I thought it was the most exciting story in the book, but not only that, I thought it was one of the most exciting stories in recent American politics. I just thought it would make an amazing movie. I also thought that doing a story about Barack Obama at this time, it would be impossible for the film not to come across as an informercial for his reelection and it would be difficult for an audience to get lost in a movie about him while he was still president. I think there’s a great movie there, too. But I think that movie needs to be made after he’s out of office.

When did you start to work on this? And, as in “Recount,” I understand it began with a lot of your own reporting.

I think we started in late summer, 2010. I did 25 interviews with people in the campaign and then read a ton of other books, too, on the subject, particularly Sarah Palin’s book “Going Rogue,” which was a beat-by-beat account of what happened in the campaign from her point of view.

What percentage of the movie was based on the book and what was your own reporting?

I would say 90 percent of the movie is the book, 5 percent is my original reporting, 5 percent is other sources.  But so much of my own reporting was just trying to confirm the veracity of the book, which I found to be extremely accurate, based on the interviews.

I don’t want to misrepresent I was some big scoop-getter in this process. The movie really is built on the back of reporting of the book. There’s nothing I found out that I wouldn’t have been able to find out if it hadn’t been the work John and Mark had done. But there’s one thing [I found out] that’s already been put on record that I’ll just mention – that Palin thought that the queen of England was the ruler of England. That’s something I got from my own reporting.

There were also some surprising quotes in the book that I don’t remember seeing in the movie, such as when she said during a low point of preparing for her single debate “If I’d known everything I know now, I wouldn’t have done this.”

Yeah, you know that was in the movie. It was in the script and was shot. It just ended up on the cutting room floor. But you’re absolutely right. It’s an amazing line, isn’t it? When you’re editing a film, you’re just trying to get it to breathe; you’re trying to make it work. Things kind of just get cut here and there. And that was just one of those moments. I believe that line was the casualty of a scene that was made significantly shorter.

How was this process different from your last film, which was also a political potboiler based on recent events?

In the case of “Recount,” I had never done anything like that before. I had no background in journalism. I always tell people the biggest advantage is that I had no idea what I was doing. It was really exhilarating and kind of scary. By the time I did this, I’d done several projects now where I’ve interviewed people. I’ve just done it a lot more. I’m used to it; I’m used to dealing with sources.

Also, one of the big differences between the two films is that “Recount” has Democrats and Republicans, but this one is just Republicans. By the way, I prefer dealing with just one party in a movie rather than dealing with two, because you have all these balance issues that have nothing to do with story. You know, for every scene of one party, you have to have a scene of the other, kind of thing. In this we just get to tell our story.

Did you see any similarities in Katherine Harris, who is one of the central characters in "Recount"?

I don’t really see many  similarities between Katherine Harris and Sarah Palin as far as their portrayal in film. In “Recount,” Katherine Harris is secretary of state of Florida overseeing the recount process. The film shows how she, beat by beat, does everything she can to help one candidate. That’s violating her oath of office, and I think the film is very critical of that.

In “Game Change,” the film doesn’t show Sarah Palin doing anything unethically. It shows how Palin goes on to become this beloved, charismatic figure within the party, whereas Katherine Harris is not. This is just the story of someone who has been thrust on the national spotlight literally overnight, as Katherine Harris was, and is doing her best to try and make things work. I think Katherine Harris was doing her best to try to help one candidate get elected, when she should have been overseeing a fair and impartial process.

You do get to show the charismatic side of Palin, particularly on the rope lines or when she’s meeting other parents of Down syndrome children.

Yeah, the scenes were really moving. When campaign staffers would tell me those moments on the rope line, whether they loved Sarah Palin or didn’t love Sarah Palin, they all told me it would make them cry. You need to show what made her so beloved and dynamic. That’s an amazing part of the story.

Political dramas in general seem rife for criticism even before the film is released.

Absolutely. And that happened on “Recount” too. It happened on the Democrats’ side. Warren Christopher came out and attacked the film before he had seen it. In this case, we have Sarah Palin staffers basically attacking the film before they’ve seen it. To be honest with you, I don’t think it serves either one of them. I think both portrayals are much more complex, dynamic and layered than they realized because they hadn’t seen the film. It gives the films a lot of publicity.

We’ve had screenings across the country by now, and one of the main things that people talk to me about afterward in the Q & As is how sympathetic she comes across at times; how they never imagined they were going to see her in the light that they see her in – particularly liberal Democrats that don’t care for her are surprised about how much sympathy they have for her with the pressure she was under.

I’ve heard that one of the Palin staffers who complained had offered to be a consultant earlier.

Yeah. The offer was in an email to me, where he asked to be our confidential consultant with formal agreement. And I’m just very surprised. In the same email he basically validated the book by saying that the portrayal of Sarah Palin was complex and unique, not false and inaccurate. So I was pretty stunned that a week ago, a year after that email, he came out and attacked the film as being based on a book that’s grossly inaccurate. And if it was so grossly inaccurate, I don’t know why he would have offered to have been our confidential consultant a year ago.

We did hire a consultant. The person we hired [Chris Edwards] was someone who we thought had a very balanced, fair viewpoint of the entire campaign. He was her deputy chief of staff on the campaign, so he was there for everything.

And the reason to have a consultant is to get all the details right?

Yes. To have someone on set who sat next to Palin for those 60 days is an enormous asset. And he was primarily utilized for helping us with the technical details of what it’s really like on the campaign plane, who sits where; helping out with making the green rooms look how they actually looked. The goal was to make it look and feel as authentic as possible, and he was a great asset for that.

One of the other charges against “Game Change” is that HBO deliberately scheduled this for right after Super Tuesday to ruin any Palin election plans.

But don’t you hope this film has an effect in the broader sense?

I got the feeling it was a “Frankenstein” story – that these consultants had created a monster they regretted unleashing on the nation.

It was a "Pygmalion" story – I conceived it and Jay Roach completely agreed that this was a Pygmalion story of them finding an individual and then trying to turn her into something that perhaps she’s not. And there are consequences to that. And they lived the consequences.

Don’t you think it will affect any of Sarah Palin’s political plans going forward?

The goal of the film wasn’t to try and change anyone’s mind about anything. The goal of the film was to talk about the process of how we elect our president, and here’s a pretty crazy story in which a candidate was not vetted to be vice president of the United States. She was not properly vetted, and we came very close to having a vice president that perhaps wasn’t prepared for that job.