Obama goes to AIPAC: a scorecard 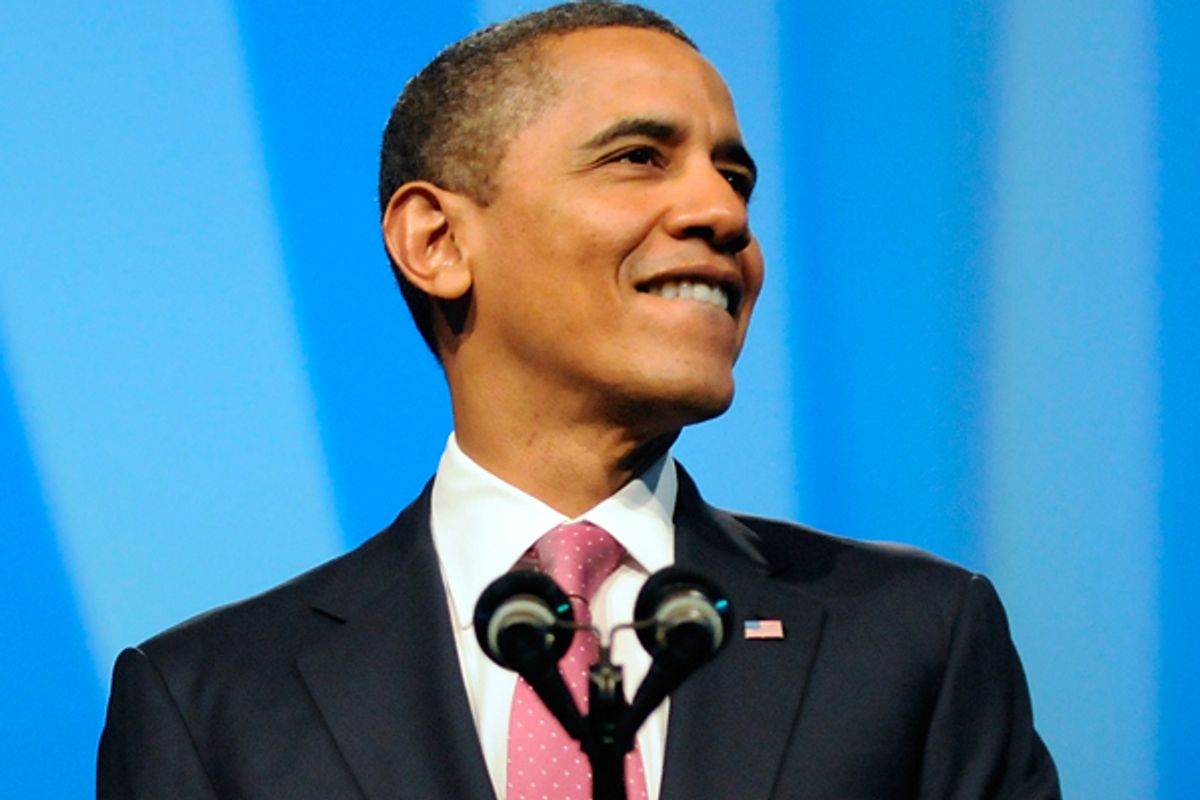 President Obama smiles during remarks at the AIPAC conference in Washington. (Reuters/Jonathan Ernst)
--

President Obama held his ground on Iran during the last several days of dueling I-love-Israel speeches, making clear that the U.S. position did not match the Israeli demand for an immediate military strike against Iran’s non-existent nuclear weapons program. But Prime Minister Netanyahu scored a big victory as well, with Iran-as-a-threat completely dominating the discussion, and Israel’s occupation of Palestine off the agenda.

AIPAC and the rest of the pro-Israel lobby remain influential despite the extraordinary shift in public opinion and popular discourse over the last several years that has put the lobby on the defensive everywhere but Congress.  Obama’s AIPAC speech reflected that influence and the perceived need of mainstream politicians to adhere to its demands, especially during the pressures of an election cycle. It would give, he and his advisers hope, a powerful boost to his campaign.

But on the critical question of Iran, his speech also highlighted the small but significant divide that continues to split U.S. from Israeli policy.  Obama offered a rhetorical embrace, but a much less-than-desired military promise to Israel on Iran, while delivering a slap in the face to human rights, international law, and any U.S. responsibility for ending support for Israel’s anti-Palestinian occupation and apartheid policies.

The Atlantic’s longtime correspondent James Fallows noted “what I found odd about the AIPAC performance is that an American president was expected to make similar pleas about his reliability in support of another country's government.”  But that denies the longevity and intensity of the U.S.-Israeli “special relationship.”  As that relationship was consolidated during the post-1967 Cold War years, it was shaped by the mutually reinforcing influences of the pro-Israel lobby and those of the powerful military-strategic forces, from the Pentagon to the weapons manufacturers to members of Congress.

As a result, that exact expectation of presidential reliability in supporting Israel began to be taken for granted.  What was in fact more odd than the usual verbal genuflections to Israeli interests was the fact that his actual policy assertion towards Iran differed significantly from what Netanyahu was so insistently demanding.

The rhetorical obeisance, for sure, was beyond full-throated. Responding to his Republican challengers and other critics who claim he has been too tough on Israel (and not tough enough on Iran), Obama proudly catalogued his long list of support, bragging that “when the chips are down, I have Israel’s back.” He reminded skeptical Israel supporters that U.S. military and intelligence cooperation with Israel “has never been closer.” With U.S. military assistance to Israel higher than ever, $30 billion over these ten years, Obama reasserted his commitment to “preserve Israel’s qualitative military edge,” and boasted about his administration’s additional funding of Israel’s anti-missile Iron Dome system. He bragged of protecting Israel in the UN, where U.S. vetoes defend illegal settlements and U.S. opposition prevents Israeli military and political leaders from being held accountable for potential war crimes.

In an unmistakable recognition of how civil society activism is cutting into the once-uncritical pro-Israel discourse of the United States, Obama won applause for his declaration that “when there are efforts to boycott or divest from Israel, we will stand against them. And whenever an effort is made to de-legitimize the state of Israel, my administration has opposed them.”

President Obama also endeared himself to the crowd by referring to the “Jewish state of Israel.”  In the last couple of years Washington has accepted Israel’s demand for Palestinian recognition of Israel as a “Jewish state” as a new precondition to restarting the long-failed peace talks.  But accepting Israel as a “Jewish state” is widely viewed as legitimizing the inequality of rights and privileges available to Jews and not to Palestinians both inside Israel and in the occupied territories.

The president was clear that the Iran war gap between Washington and Tel Aviv remains. On the critical question of whether the U.S. would join, defend, participate in, or even lead an Israeli military strike, Obama made it clear at AIPAC that he really doesn’t want to go to war against Iran. It shouldn’t be a surprise, given what $5.00/gallon gasoline would do to his November re-election prospects.

Obama’s talk was rhetorically tough--“The entire world has an interest in preventing Iran from acquiring a nuclear weapon”--but he rejected Israel’s demand, reasserting the U.S. position that only the actual acquisition of a nuclear weapon by Iran might trigger a U.S. military response. For Tel Aviv (along with AIPAC and several U.S. senators), that red line is Iran reaching nuclear weapons capability, which really means the scientific know-how (remember Israeli officials’ chortling over those assassinated scientists?) and enrichment facilities.

Israel’s political leadership, especially Prime Minister Netanyahu, claim Iran has already reached capability, and their demand is for a U.S. commitment to back an Israeli strike against Iran’s nuclear power infrastructure.  In fact, Israel wants a military strike really soon, on the grounds that Iran is building some of its enrichment facilities in a mountainside. Tel Aviv is outraged that Iran is thus creating a “zone of immunity,” as if Iran were somehow obligated to build its legal enrichment facilities within easy air-strike access.

But Obama clearly rejected that demand. He described every possible future use of U.S. military force as “preventing Iran from obtaining a nuclear weapon,” not preventing weapons capability. His rejection of containment was similarly in favor of “a policy to prevent Iran from obtaining a nuclear weapon.” The words “capability” or “capacity” did not appear in the speech.

In fact, any U.S. military strike against Iran, whether or not Iran moved towards weaponization, would still be in violation of the UN Charter, requiring powerful opposition even now.  But the U.S. version still differs significantly from Israel’s demand.  In that context, Obama’s justification for using force “when it is necessary to defend the United States and its interests” – he didn’t say “the U.S. and its allies” – was significant, as was his reminding the AIPAC audience that “there is too much loose talk of war.”

So despite his rhetorical escalation in political pandering, Obama at AIPAC did not show any willingness to acquiesce to Israel’s demand for a military assault on Iran.

Palestine out in the cold

But if the speech did not include new threats of military force against Iran, it did demonstrate the breadth of problems in U.S. policy towards Iran, Israel, Palestine and the region as a whole. Along with claiming legality for what would under any circumstances still be an illegal U.S. military strike against Iran, Obama reasserted the legitimacy of U.S.-led sanctions. He admitted that sanctions have only been “slowing” Iran’s nuclear energy program (which is legal under the Non-Proliferation Treaty and remains under inspection by the UN’s nuclear watchdog agency), but bragged they have been “virtually grinding the Iranian economy to a halt.”  Sanctions that aim to “cripple” the economy on which 74 million people depend, are clearly in violation of international law.

It’s good that President Obama reminded AIPAC that Iran does not have a nuclear weapon – but how much more powerful it would have been if he had reminded them that Israel, the only actual nuclear weapons state in the Middle East, does have an arsenal of several hundred nuclear warheads, which remain out of reach of UN or any other inspectors. How much more important would this speech have been, bringing it to the level of global game-changer, if he had used the occasion to add U.S. support to the urgent global call for creating, now, a nuclear weapons-free zone throughout the Middle East – with no exceptions?

Aside from the rhetorical pandering on Iran, perhaps the biggest failure in Obama’s AIPAC speech was in its giving Israel a get-out-of-accountability-free card. Clearly Israel has no reason to worry about any possible U.S. pressure to end its occupation and apartheid policies. Any Obama administration commitment to working to end the Palestinian-Israeli conflict is over, at least till after the elections. Yes, everyone knew that the main focus of his speech would be Iran, but those few defensive lines mentioning the Palestinians made all too clear that the days of at least rhetorical calls for a settlement freeze (however lacking in real pressure), the recognition of the 1967 borders (however spurious by acceptance of Israeli-determined “swaps”), the willingness to admit that maybe Israel had some obligations (see the lack of real pressure, above…) – all that is over. Maybe until the presidential election, maybe for good.

So what’s the score? No additional threats of war against Iran, that’s good.  And yes it’s AIPAC. No one expected a serious condemnation of Israeli occupation and apartheid. No one expected a robust defense of human rights and equality in Israel and Palestine.No one expected the president to be even even-handed.  But really - abandoning even the pretense of concern for Palestinian rights, or even a sotto-voice admission that ending Israel’s occupation just might help bring some level of stability, if not peace, in the region?

President Obama really missed his chance here, to take advantage of the degree to which the public discourse has changed so dramatically on this issue in these last few years. Criticizing Israel hasn’t meant political suicide for quite a while now. One of the Washington Post’s top political analysts, Walter Pincus, wrote that the U.S. “needs to reevaluate its assistance to Israel” and the sky didn’t fall. Salon has reported that  “The media consensus on Israel is collapsing” noting that “across the political spectrum, once-taboo criticism is now common.”

Members of Congress remain frightened of the lobby’s campaign financing clout – but AIPAC doesn’t hold the loyalty of nearly the percentage of Jewish voters it once did.  Maybe Obama is afraid of the money clout too – AIPAC, like the Israeli prime minister, pretty clearly favors Republicans these days (every Republican candidate except the anti-intervention Ron Paul was featured on the AIPAC dais).  So maybe the answer is that the Obama administration and his campaign strategists are just too nervous to acknowledge that discourse shift that has been so evident since he’s been in office. It’s just more change than the president is ready for.