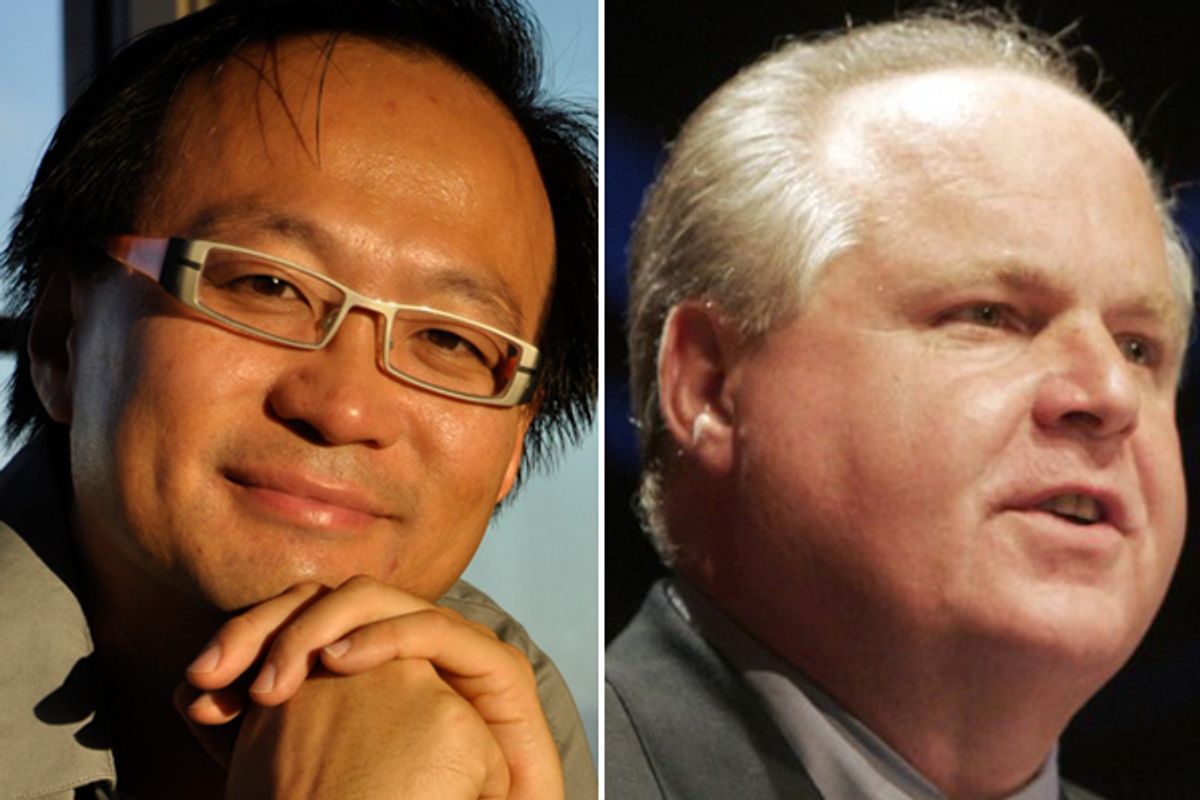 Some progressives may dare to dream that the day is coming when Rush Limbaugh's bray no longer cranks out of every wavelength orifice in the American radio dial. In the wake of his attacks on Sandra Fluke, blue chip advertisers like Netflix, Allstate, John Deere and Capital One are either dropping him as fast as they can, or publicly saying their ads on his show have been “mistakes.”

But, the formerly oxycontin-addicted, thrice-married broadcaster is only now finding his true friends.  One businessman eager to replace those who cut and run is Brandon Wade, the founder of a website called SeekingArrangements.com that pairs college girls needing money (Sugar Babies) with older men (Sugar Daddies) needing, well,  “an arrangement.”

Yesterday, the dating site offered to start buying 30- and 60-second spots on Rush’s show. If approved, the ads will run next month.

In a plot twist Stephen Colbert’s writers might have dreamed up on a slow news day, Wade hailed the doughy bellower as a model for guys who like ‘em young, hot and financially needy.

“Rush Limbaugh, who married a blonde bombshell half his age, is a model Sugar Daddy," the company announced. “The moniker of a Sugar Daddy is that of an older, successful, wealthy man romantically involved with a younger, beautiful woman, much like the relationship Rush shares with his much younger wife, Lauryn Rogers.”

“Rush Limbaugh is one of the greatest examples of the modern day Sugar Daddy,” Wade said in a press release. “We wouldn’t feel right if we didn’t come forward and support him in his time of need.”

The site now boasts a million site users, has been featured on a full episode of "The Dr. Phil Show." CNN legal expert “Sunny” Hostin called its “Sugar Baby” members “prostitutes.”  Last year, the site published a list of the Top 20 Universities with the most Sugar Babies, and British GQ Magazine has called SeekingArrangement.com “the future of online dating.”

Wade sees no shame in the Mercantile Theory of Human Relations.

No one is calling Newt Gingrich a slut when he asks his Billionaire Sugar Daddy, Sheldon Adelson, to inject cash to keep his presidential campaign afloat. But, when a woman seeks out a Sugar Daddy to help pay for college, many in mainstream media have no problem likening her to being a prostitute. Such is the hypocrisy of the society we live in.

Wade said he would buy ad spots to support “free speech,” and because Limbaugh’s show “appeals to the largest Sugar Daddy demographic.”

In an August interview with the Wall Street Journal, Wade, who has degrees from MIT, said financially based relationships are actually better than the other sort. “The fact that people are brutally honest up front makes these relationships healthier than others where people beat around the bush. If you know going into a relationship that a person is going to use you and you are going to use them, then it’s healthier because there is a mutually agreed exchange of expectations.”

Wade told the Journal he started the website in 2006 out of personal need.

“I had graduated from MIT and was making six figures, but it was very poor pickings for me. I would write emails [to prospective dates] and get a 1 to 2% response rate. My mom had told me that if you studied hard and were successful the women would line up. I help out girlfriends financially as well as with mentoring. I took those characteristics from my own dating and built a website around that.”