Inside that new anti-Occupy bill 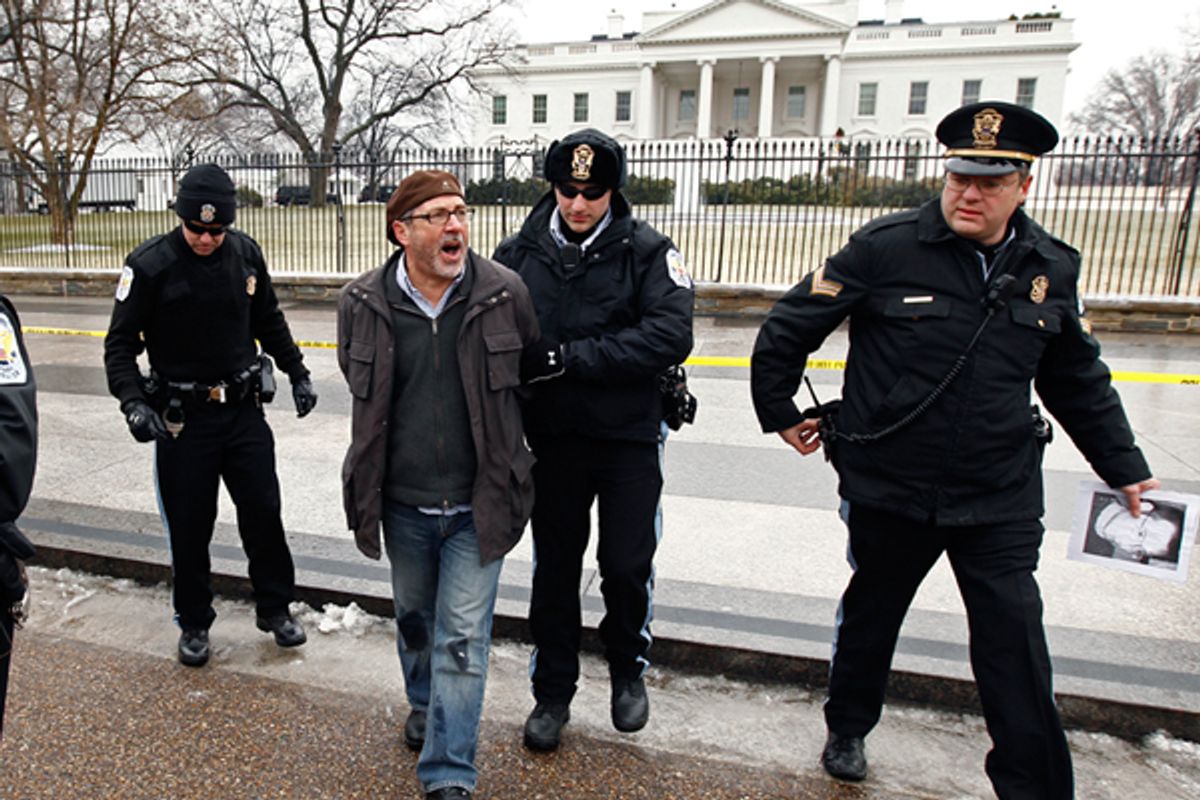 A protester is arrested at the White House in January, 2011. (AP/Kevin Lamarque)
--

In recent days, there has been a considerable amount of online speculation over a bill that made its way through the House and the Senate last week with little opposition -- HR 347, or the Federal Restricted Buildings and Grounds Improvement Act of 2011. Some have decried it as specifically anti-Occupy legislation with the aim to further curtail First Amendment rights. HR 347 makes it a prosecutable offense to knowingly, and without lawful authority, enter "(1) the White House or its grounds or the Vice President's official residence or its grounds, (2) a building or grounds where the President or other person protected by the Secret Service is or will be temporarily visiting, or (3) a building or grounds so restricted due to a special event of national significance."

This would, of course, include the areas restricted in Chicago for the NATO summit and Camp David for the G-8. However, concerns focusing solely on the passing of HR 347 seem to be a red herring of sorts, as most of its content has long been enshrined into law.

The new bill specifically addresses certain trespassing violations in D.C., which currently do not fall under the remit of federal law (i.e., HR 347 now makes it a federal issue if you trespass onto White House grounds). The only other significant change in the bill is a shift in language, which will make it easier to prosecute those who are found to unlawfully have entered these restricted areas. The law used to say that the person must have entered the area "knowingly" and "willfully." HR 347, however, scrapped the "willfully," which essentially now renders it a crime to remain in a restricted area, even if you do not know that it's illegal for you to be there.

"By striking out 'willfully' they make it easier to prosecute under 'knowingly,'" explained Mara Verheyden-Hilliard, executive director of the Partnership for Civil Justice Fund. She noted with some exasperation that the campaigns focusing energies against HR 347 miss the bigger, ongoing fight for basic free speech and threats to it, as this specific law is only an amendment to laws that were primarily established in 2006. For Verheyden-Hilliard, HR 347 is best understood as the government "looking at the tools in their arsenal and polishing them up" in time for major, protest-drawing summits and political conventions this year.

This is not to say that free speech issues raised by HR 347's passage should be ignored, but rather contextualized against a backdrop where protest and dissent are already consistently treated as illegal.