The problem with being a Massachusetts Mormon 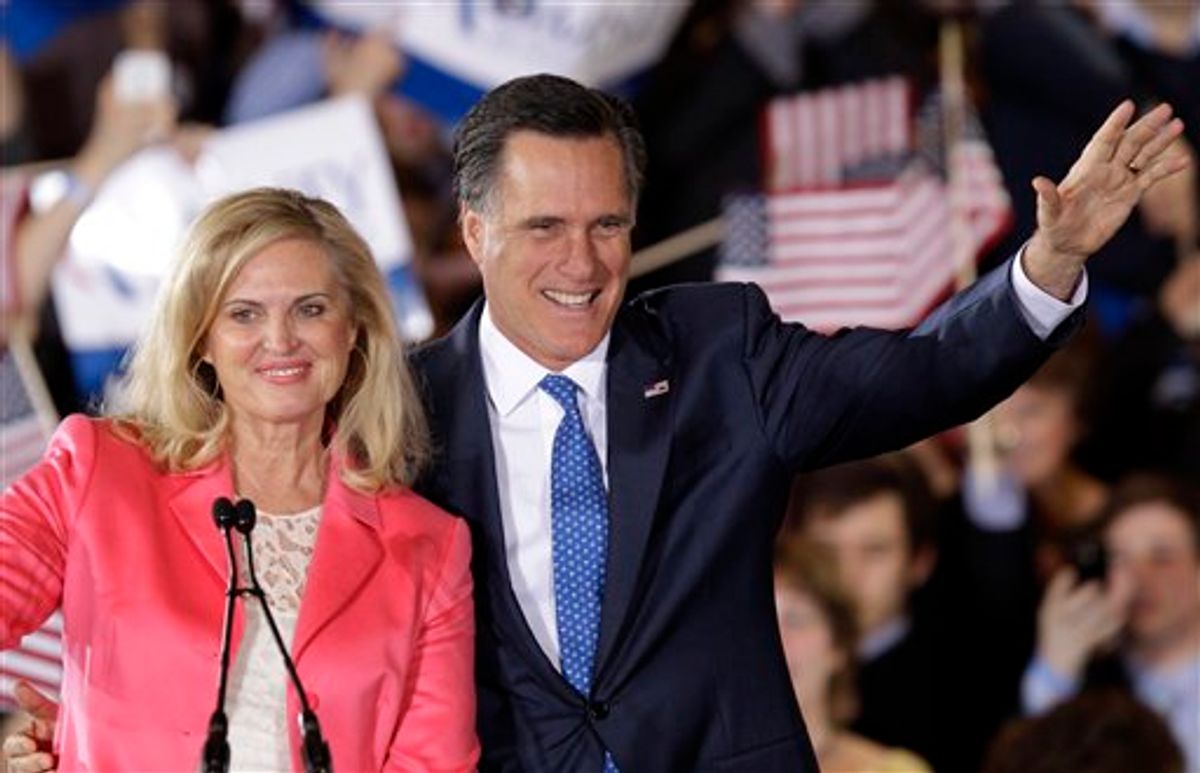 The good news for Mitt Romney is that he avoided the perception of a total meltdown on Tuesday night, preventing (just barely) Rick Santorum from scoring a victory in Ohio, the day’s signature contest. Plus, Romney was the clear winner in the night's delegate race, adding to his lead in the battle that ultimately matters the most.

But Super Tuesday was still a failure for the former Massachusetts governor, who missed an opportunity to deliver a psychological knockout blow that would have convinced the political world to treat the GOP nomination as a settled matter.

This is no small matter for Romney, since the primary race is draining his resources, forcing him to pander to a party base that’s deeply out of step with the fall electorate, and generally soiling his image with swing voters. Romney’s failure Tuesday night ensures that this painful process will continue to enjoy the national spotlight for the foreseeable future.

And things are probably going to get worse for him before they get better. The reason can be found in the demographic formula that haunted him on Tuesday night – and that looms in most of the contests remaining on this month’s calendar: The more evangelical, Southern, rural and conservative an electorate is, the worse Romney does.

Take Tennessee, where Romney lost by 9 points to Santorum, 37 to 28 percent. That margin is probably deceptively close, a result of the 24 percent that Newt Gingrich gobbled up, something that becomes clear when you look at the exit poll data. Among the 41 percent of voters who called themselves “very conservative,” Romney actually ran third, with just 18 percent. He was also third among the 73 percent who identified as evangelicals. In other words, Romney was an afterthought to the dominant voting blocs in the state. In a two-way race, he probably would have been blown away.

Similar numbers defined the races in Oklahoma, where Romney lost by 6 points to Santorum, 34 to 28 percent, and Georgia, where favorite son Gingrich crushed Romney by 21 points.  In both states, there were large numbers of very conservative voters (47 percent of the Oklahoma electorate and 39 percent in Georgia), and Romney finished a distant third among them. He was also third among evangelicals, who accounted for 71 percent of the Oklahoma voting universe and 64 percent of Georgia’s.

This is a problem that just isn’t going away for Romney. Except in states with high Mormon populations, he’s faced steady resistance from the most conservative and religious elements of the GOP.

Part of this can be traced to the radicalizing effects of the Tea Party movement, which has redefined conservatism in the Obama era and put Romney, with his moderate past and universal healthcare law in Massachusetts, on the defensive. Romney had some success running as the candidate of movement conservatives in 2008, but not this time. He evokes too many of the characteristics of the Bush-era Republicanism that the Tea Party base is at war with.

There’s something else, though, even if it’s impossible to quantify: Romney's Mormonism, which has always made him a tough sell to the Christian right, particularly in the South, where Pentecostals and Southern Baptists are so prominent. Even in ’08, when he ran as the conservative alternative to John McCain, Romney struggled in the South, finishing far back in states with large evangelical populations.

Back then, at least, this could partly be chalked up to the presence of a Baptist preacher in the race, Mike Huckabee. But this time around, Romney’s two main foes are Roman Catholics, one with Pennsylvania roots and the other a military brat who spent some of his adult life in Georgia. He’s still failing to make inroads with Southern evangelicals, though, and it’s hard to believe his Mormon faith isn’t a big reason for this.

The problem for Romney is that the electorates of most of the upcoming contests will look a lot like this. First up are caucuses this Saturday in Kansas. Then come primaries next Tuesday in Alabama, where 77 percent of ’08 primary participants were evangelicals, and Mississippi, where the ’08 evangelical number was 69 percent. Missouri, where Santorum already crushed Romney in a non-binding primary, will hold caucuses later this month, and Louisiana (where the ’08 evangelical vote was 57 percent) will vote on March 24. Super Tuesday strongly suggests that there’s just no way Romney can win over the voters he needs in states like these. And his problem could get worse if Santorum somehow convinces Gingrich to exit the race.

This doesn’t mean Romney is suddenly in danger of losing the nomination. He has a clear delegate lead right now, and there are plenty of states that aren’t demographically off-limits to him. Illinois, for instance, also votes this month, and he should do well there. But it looks like an embarrassing string of defeats is on the horizon for Romney, one that will draw further attention to the GOP race, erode his treasury, delay his pivot to the general election, and worsen his image problem with general election voters.

So while Romney is still the likely nominee, Tuesday night made it more likely that he’ll be a wounded one.