The real way to hold down gas prices

If Republicans are serious about saving people money, Bernie Sanders has a plan 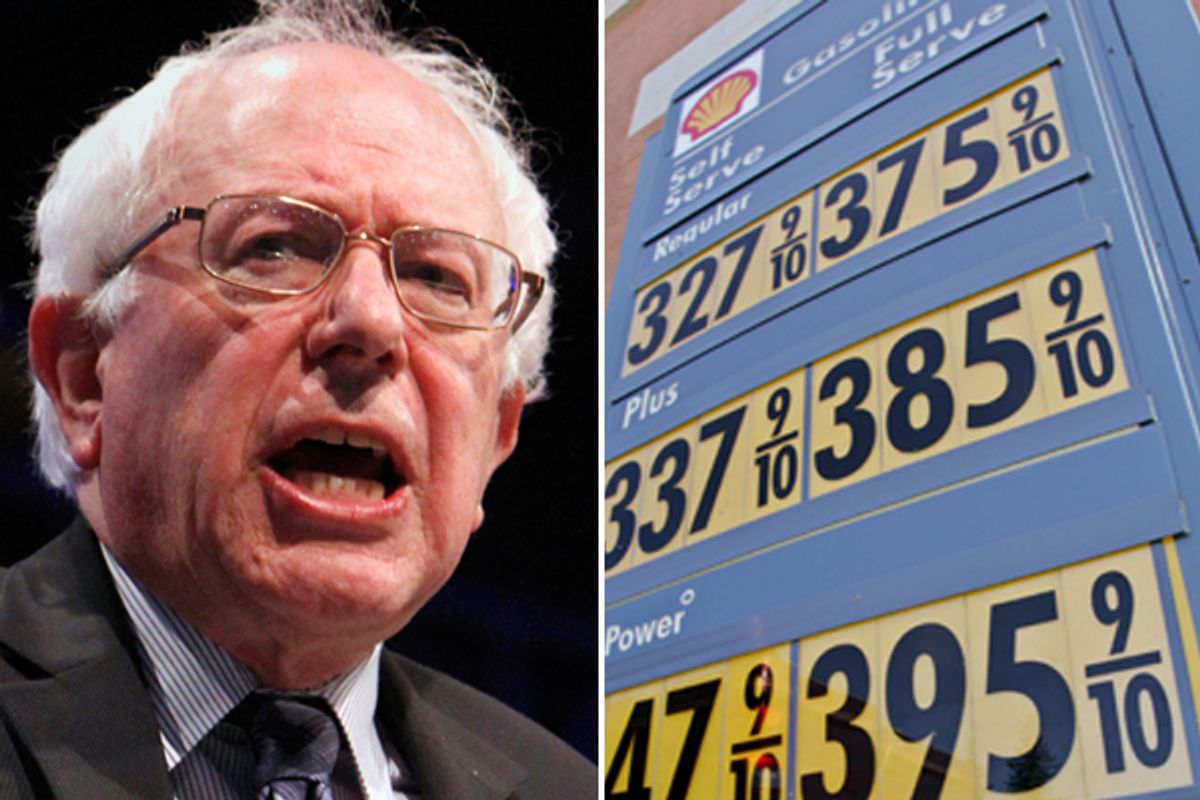 Republicans have been stridently exploiting the gas price horrors facing motorists in what Steve Kornacki correctly observes is an indication of President Obama’s strength. Taking that thought one step further, I’d suggest that there’s an opportunity here for the Obama Administration to throw down the gauntlet to the GOP on this issue.

Just rigorously enforce the law. Dodd-Frank, to be exact.

A little-noted provision of that 2010 law, which was passed in reaction to the 2008 financial crisis, requires an even littler-noticed federal agency, the Commodity Futures Trading Commission, to establish “position limits” for commodity and swaps traders. I’m something of an obscure-securities-law buff, but even I wasn’t aware of that Dodd-Frank provision until this week, when the dependably progressive Vermont senator, Bernie Sanders, got 67 congressional signatures on a letter calling on the CFTC to do its job.

If enacted in a sensible fashion, position limits would go a long way toward easing consumer pain at the gas pump. That’s because speculators have played a major role in driving up gas prices. That’s not just empty rhetoric, or conspiracist theorizing, but proven fact. A recently updated study by the staff of the St. Louis Federal Reserve (get your copy here), found that speculation “played a significant role in the oil price increase between 2004 and 2008 and its subsequent collapse.”

It’s reasonable to conclude that speculators are also playing a key role in the current oil-price run-up, in addition to the sabre-rattling over Iran and other geopolitical and economic factors. A study by none other than Goldman Sachs has found that each million barrels' worth of speculation adds 10 cents to every barrel of oil.  There were about 233.9 million crude oil contracts that were the subject of speculation as of Feb. 28. Thus speculation added $23.39 to the price of a $108 barrel of oil, which translates to 56 cents a gallon at the pump. Without speculation, Forbes writer Bob Lenzner notes, a barrel of oil would have cost as little as $74.61, and the cost of fuel would have been $3.12 a gallon on Feb. 28, and not the price it was actually commanding in the northeastern U.S.: $3.68.

In his letter to the CFTC, Sanders points out that “It is one of your primary duties--indeed, perhaps your most important--to ensure that the prices Americans pay for gasoline and heating oil are fair, and that the markets in which prices are discovered operate free from fraud, abuse, and manipulation.” He’s right, but in fact there doesn’t even have to be manipulation for oil traders to have an adverse impact on oil prices.

The reason is that the oil futures markets have been a merry playground for hedge funds—multibillion-dollar partnerships that make immense bets in stocks, futures and swaps contracts and commodities. Some hedge fund managers have made big bucks trading oil futures—George Soros is one. The problem is not that their trading has gamed the market, necessarily, but that they have made the pricing swings even more severe than they otherwise would have been. We’re talking about immense sums of money. Trading volume in commodity index trading strategies, for instance, climbed from $13 billion in 2004 to $260 billion in March 2008, according to the St. Louis Fed study.

With such enormous bucks devoted to trading in oil and other commodities, the distortions that they cause have been exacerbated. Studies as far back as the 1920s have found that large speculative positions in grain resulted in “wild and erratic” price moves. Recent studies cited by the St. Louis Fed described how speculators hurt consumers. One study, for instance, found that speculators distort the supply and demand equation simply by purchasing large numbers of futures contracts, thereby boosting their prices. “As producers expect a higher price of oil for future delivery, they will hold oil back from the market and accumulate inventories,” the Fed notes, citing a 2011 study.

Hey, you would too, if you knew that something that you produced was going to be more expensive two or three weeks down the road. And, of course, holding back your product also tends to make it more expensive, by reducing supply.  When frosts damage orange crops, juice prices go way up.

Now, this is not to say that (contrary to what some of the coverage of Sanders’ letter has incorrectly reported) the CFTC has taken no action on this issue. Au contraire, the agency published complex formulae covering a slew of commodities, including oil, gasoline and natural gas, which were published in the Federal Register in January, as can be viewed here.

The problem is twofold. First these limits just aren’t strict enough, as Sanders points out in his letter. Secondly, Wall Street trade groups filed suit in December—before the interim final rules were even published—arguing that even the modest contract limits that were imposed were actually too strict. The lawsuit has delayed implementation of the position limits that were put into effect. Another obstacle, his letter noted, is that there have been delays in gathering the data needed to put the limits into effect.

Obviously Sanders isn’t going to get much, if any, Republican support for his letter, because position limits (and even the very concept of Dodd-Frank) are anathema to the Republican Party’s stringent adherence to free-market dogma. One doesn’t have to be a laissez-faire absolutist like Ron Paul to oppose position limits on commodity traders. The very idea is just a nonstarter to the GOP.

But that doesn’t make them any less of a good idea, which is why Obama should fight that Wall Street lawsuit like hell, and demand that the Republicans join him in opposing it. I’m damned if I understand why he hasn’t done that already. Obama also should lean on the CFTC to put some more muscle in the position limits.

Frankly, given their destructive impact on consumers, I’m not really clear why we even need an oil futures market in the first place, or why speculation can’t be banned from the oil market entirely. Oil futures were originally created to give heating oil dealers, gas retailers, aviation companies and other businesses a method of hedging against adverse price changes. Instead, they’ve become just another Wall Street plaything.

There’s plenty of precedent for Obama taking a strong hand on the oil markets. The New York Stock Exchange was closed for four months at the beginning of World War I for a public purpose—to prevent panic selling. Sure, Wall Street will try to circumvent any such action. But if Obama can take action against Iranian bankers quite as effectively as he has, he can certainly do the same with oil speculators. He can at least try. And if the GOP wants to support Wall Street against him and the American consumer on this issue—so be it.