The economic story Obama must tell

We need government investment to restore prosperity. The president needs to explain that in a way that makes sense 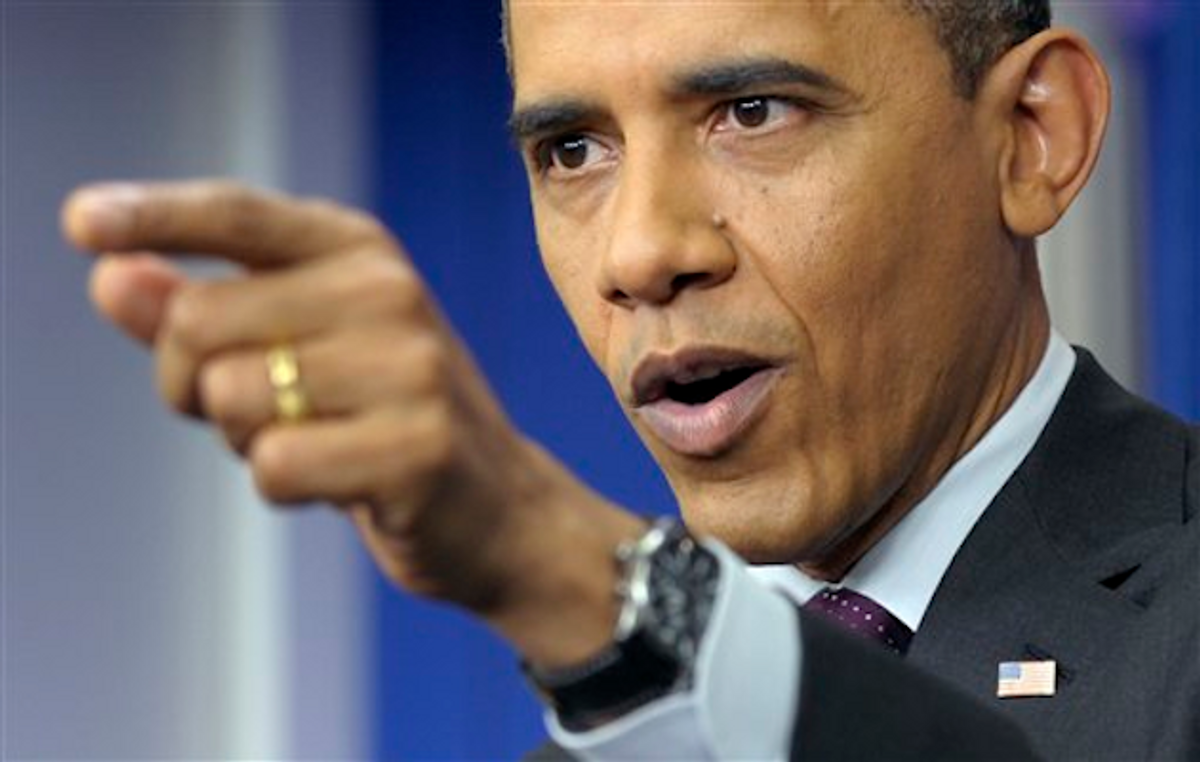 Look at it this way: If the Wall Street banking crisis had taken place in 2007 instead of 2008, George W. Bush wouldn't be able to leave home without being jeered. (As it is, he rarely leaves Texas.) Hardly anybody would buy the brand of tycoonomics GOP presidential candidates are selling. People would understand that save-the-millionaires tax cuts and deregulation had dramatically failed. President Obama would get more credit for pulling the economy out of a nose dive.

Alas, people have short attention spans and a weak understanding of abstract economic issues. You have to tell them a story. The failure of policymakers to do that has been driving progressive MVP Paul Krugman crazy. How can it be, he asks, that governments foreign and domestic are repeating the mistakes of the early 1930s — slashing government spending to reduce budget deficits, putting more people out of work, reducing demand, and inadvertently increasing  deficits? Rinse and repeat.

Part of it is that the lessons of the Great Depression belong to history, and, as such, are infinitely malleable. Arguments your grandfather would have dismissed — such as Mitt Romney’s plans to assure prosperity by topping off Scrooge McDuck’s bullion tank — are given credence today. Granddad may not have grasped Keynesian economic theory, but he remembered “Hoovervilles” and bread lines. Scrooge McDuck wasn’t a cartoon figure for nothing.

Professor Krugman acknowledges that some kinds of economic thinking seem counterintuitive. “Thus,” he writes, “it’s normal to think of the economy as a whole as being like a family, which must tighten its belt in hard times; it’s also completely wrong.” Yet it makes him crazy that even President Obama has used the belt-tightening analogy.

While deeply misleading, the family metaphor works politically because it sounds like common sense. Sometimes I wonder if Grandpa didn’t also have an advantage in living closer to the farm. Though innately conservative, rural people do understand that if you skimp on fertilizer in April, you’ll have a poor hay crop come September and a hard time getting your livestock through the winter.

But nobody ever puts it to people like that. Even somebody like Krugman can be brilliant at argumentation, less gifted at storytelling. Democrats generally have lost the knack.

The key is to stress government investment. In Arkansas, where I live, nothing could be clearer than the relationship between public investment and economic prosperity. It’s practically written on the landscape, yet many need reminding.

I recently read a beautifully written memoir called “A Straw in the Sun,” by Charlie May Simon, an Arkansas writer who homesteaded in Perry County (where I live) during the 1930s. Back then, rural Arkansans basically lived in the Third World. Simon and her neighbors grew their own food, made their own clothes, music and home brew. They had no electrical power, telephones, indoor plumbing or paved roads. Few in Perry County did. They walked to town, or hitched rides on mule-drawn wagons.

Enchanting as Simon makes it sound, the world she evokes feels not 75 years distant, but 175. After World War II, what brought Perry County into the 20th century was government investment. My 65-year-old neighbor was in high school when the main highway through the county was first paved after the U.S. Army Corps of Engineers bridged the Arkansas River at Conway.

So it came as something of a surprise to read that my ambitious state representative, a genial former neighbor now living over in Conway, has conceived a plan to return us to the bad old days. Supposedly by eliminating income taxes from 40 of the state’s less prosperous counties — along with concomitant cuts in public spending — GOP visionaries envision that nothing less than an economic miracle will take place.

Never mind why no such thing happened during Arkansas’s first 150 years or so of statehood. Thankfully, the proposal got nowhere. What’s amazing to me, however, is that otherwise intelligent people could be so blinded by ideology as to entertain so preposterous a scheme. Believe me; these fellows are rapt with sincerity. What’s more, their ideological brethren are taking over state governments from sea to shining sea.

That Conway, a pleasant town of approximately 60,000, should serve as the epicenter of this backward revolution strikes me as comically ironic. Although filled with Republicans, there are few cities of like size whose prosperity depends more obviously upon public largess. Located along Interstate 40, it’s also home to three state agencies and the University of Central Arkansas, a rapidly growing public institution. Trim UCA’s budget 20 percent, and Conway’s economy would go into a tailspin.

The city’s two private colleges are greatly dependent upon state-sponsored tuition scholarships, just as its nonprofit medical center relies upon Medicaid and Medicare. I could go on. Even Conway’s two newest large private employers are Internet- (hence government) dependent.

Around these parts, alas, Democrats have lost control of the story line.