What we should ask Romney about Mormonism

Mitt Romney doesn't have to answer for every Mormon belief. But his own role deserves scrutiny -- and answers 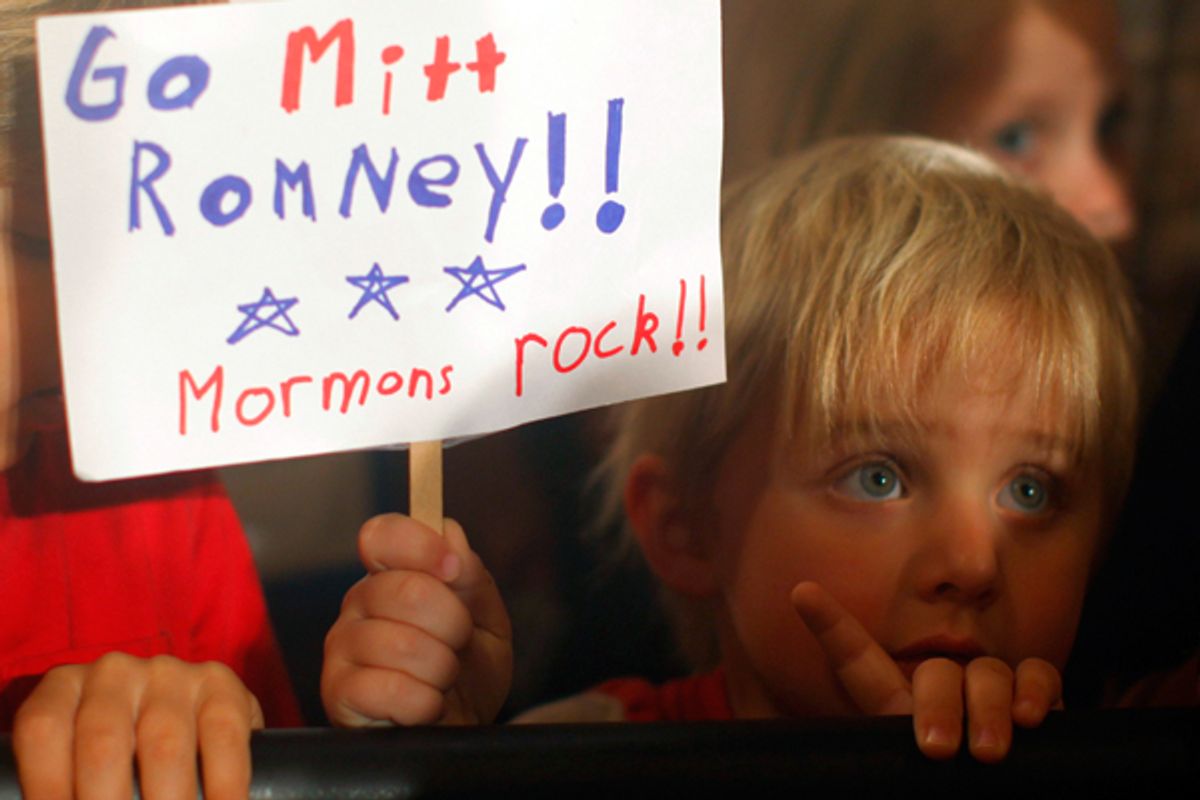 As a reporter who writes about political figures’ religion, I get asked this question a lot: How much of Mitt Romney’s Mormonism is fair game?

I usually start with Article VI of the Constitution: “no religious test shall ever be required as a qualification to any office or public trust under the United States.” His Mormonism, or any candidate’s religion or non-religion, should not be a qualifier, or a disqualifier. But the reality is that voters make judgments, some based on long-standing prejudices, some based on gut reactions, and some based on thinking a religious belief (planets, underwear, tribes of Israel roaming America) is “weird.” Or they listen to a Baptist minister who says Mormonism is a “cult.” Or not Christian. (Even if it’s not, should that matter?) Or theologically “dangerous.”

There’s a difference, though, between probing a candidate’s religious beliefs, and probing a candidate’s involvement in promoting or even acquiescing to the activities of a powerful religious institution. Should reporters ask Romney about his underwear, sacred garments that signify a Mormon’s covenant with God, and which devout Mormons believe protect them from evil? No, but a reporter can ask a Mormon scholar to explain this practice, like you might ask a Jewish studies professor to explain a yarmulke to the uninitiated. (Actually, on questions of Mormon culture, I’d recommend anything written by my colleague Joanna Brooks, who is quite frankly weary of the underwear question.)

On the other hand, there’s a different sort of question for the potential 45th president of the United States: What did he think of his church’s role in fomenting opposition to same-sex marriage in California? What does he think of feminist criticism of the church hierarchy. As a Church of Jesus Christ of Latter-day Saints bishop (a lay pastor in his ward, or local church), Romney was confronted  in the 1980s by a robust feminist LDS community in Boston. The LDS church has a history of anti-feminist activism, particularly opposition to the Equal Rights Amendment in the 1970s. Dissenters, including feminists, have been subject to discipline and even excommunication.

According to a recent article in the Washington Post, when Romney was selected as bishop in 1981, the activities of the Boston-area feminists were under intense scrutiny and pressure by the all-male LDS hierarchy in Salt Lake City. A group of Mormon women in Boston published a journal, Exponent II, named after an early 20th century newspaper of Mormon suffragists. Romney was installed as bishop to quiet what former Exponent II president Barbara Tayl0r said Romney believed were “just a bunch of bored, unhappy housewives trying to stir up trouble.”

While his harsh counseling of a pregnant woman facing a medical complication that she shouldn’t have an abortion is probably the best-known incident from this period, there were other issues. A 2008 piece by Salt Lake Tribune writer Peggy Fletcher Stack described the Boston women’s discontent with Romney's refusal, initially, to recognize that there was domestic abuse of women within the church, and his general willingness to carry out the hierarchy’s orthodoxy, although the church’s structure obviously leaves little or no room for rebellion.

Taylor and others in the Boston community nonetheless described a tiny evolution by Romney to at least recognize some of their objections, even as real structural change is impossible in the face of the church’s non-democratic structure. But Romney has never discussed how he dealt with these issues as bishop or later as president of the Boston stake (the larger geographical area that encompasses the wards), and how he, as bishop or as stake president, addressed the women’s protests against the church patriarchy.

The Mormons’ historical racism is another issue Romney doesn’t talk about. The church recently weighed in on this issue, after Brigham Young University professor Randy Bott’s racist remarks sparked a firestorm.  Bott  said that the church’s ban on African-Americans serving in the priesthood (in place until 1978) was actually a “blessing” because blacks were not ready for the priesthood. The church quickly repudiated Bott’s remarks, saying, in a statement, that his views “absolutely do not represent the teachings and doctrines of The Church of Jesus Christ of Latter-day Saints” and “We condemn racism, including any and all past racism by individuals both inside and outside the Church.” Given that Romney served as a missionary before the ban was officially lifted (in the late 1960s) and attended BYU in the late 1960s and early 1970s, it’s not beyond the pale to probe his thoughts on this issue, particularly because Mormons across the country are talking about it.

It’s not a gotcha question. Romney could go a long way toward humanizing the Romney-bot if he could explain whether he ever contested the LDS ban, in place until 1978, on African-Americans serving in the priesthood, and whether, if true, the ban caused him qualms.

Because of the unique structure of the LDS church, in which lay people (as Romney has) serve as clergy, and because of Romney’s generous financial support of his church, these are not questions aimed at showing that his theological beliefs are “weird.”

Well-reported articles about candidates’ religious beliefs are essential, not only because of what they tell us about prospective presidents, but because they help explain the variety of religious practice and belief in our country, and its role in political power. A recent New York Times article shed light on Rick Santorum’s evolution from “nominal Catholic” to ultramontanism, and his attendance at a Northern Virginia parish with Supreme Court Justice Antonin Scalia and other Washington “luminaries.”

Santorum didn’t respond to the reporters’ inquiries about his beliefs, or his sons' attending a school affiliated with Opus Dei, a Catholic organization that Father James Martin, writing in the Jesuit magazine America in 1995, described as “the most controversial group in the Catholic Church today.” Opus Dei critics, who say the organization is “more Roman than Rome,” charge it engages in coercive practices to recruit new adherents, particularly on college campuses. “I call them the Catholic Mormons,” then-Newsweek reporter Kenneth Woodward told Martin, referring to the proselytizing practices of Mormons. There’s a nugget to provoke discussion from now until the Tampa, Fla., convention.

Of course, the boundary between belief and institutions is sometimes blurred because the two overlap. Religious beliefs and rituals are complex, but it is possible to draw lines between unfair efforts to highlight the “weirdness” of certain religious practices or rituals and legitimate lines of inquiry that seek to illuminate how institutional teachings or practices shape a candidate’s politics. For example, in 2008, I argued that any injection of religion into the campaign by Sarah Palin was fair game, in terms of how her views of the end-times, for example, would influence her foreign policy. But I also felt that questions about whether she speaks in tongues while at church should be off-limits.

Imagine a Muslim candidate for president being quizzed about every verse in the Quran, asked to rebut anti-Muslim tropes, or required to rebuke every nutty thing any Muslim anywhere in the world has said (or said in the fevered imagination of someone like Pamela Geller). One can’t be held to account for all other co-religionists. As the blogger Jewdar wrote at Heeb magazine, about the controversy over Mormon posthumous baptism, which the LDS church has promised, officially speaking, to end: “We strongly object to the notion that Mitt Romney needs to say anything on the subject. Romney is a Mormon; some other Mormons did something which some people think is wrong. At what point does a member of a particular religious community–even a prominent member–need to respond to every misdeed on the part of another member of that group?”

In my perfect world, presidential candidates wouldn’t talk about their religion. They would practice it freely, but they would neither use it to prop up their candidacy nor use their opponents’ (real or fabricated) religion to bring them down. Lawmakers wouldn’t use religion to justify policy positions. And while I have no doubt that plenty of liberals are suspicious of Mormonism — either because of Proposition 8, the racism, the patriarchy, the extra-biblical revelations in upstate New York, the secrecy of the hierarchy, posthumous baptisms or from reading "Under the Banner of Heaven" or watching "Big Love" — it’s Romney’s own party that has imposed religious litmus tests on candidates.

Romney, his awkward body language tells us, would much rather not talk about his religion. He knows that half his party thinks he’s not a real Christian, or worse, belongs to a cult. (Recall that for general election purposes, these voters probably don’t think President Obama is a real Christian either.) But Romney’s running for the nomination of the party that demands its candidates testify to their salvation through Jesus and loyalty to the “Christian nation.”

Considering that Romney’s religion was founded decades after the “Christian nation,” you could see how he would have to tie himself in a knot to comply with his own party’s orthodoxy. Which is why, if he limps to the nomination, no amount of explaining will satisfy the GOP’s religious base. Fifty years from now, there won’t be a Romney religion speech to make a future candidate throw up, but the electorate will probably be more used to having Mormons around.