How to catch Joseph Kony 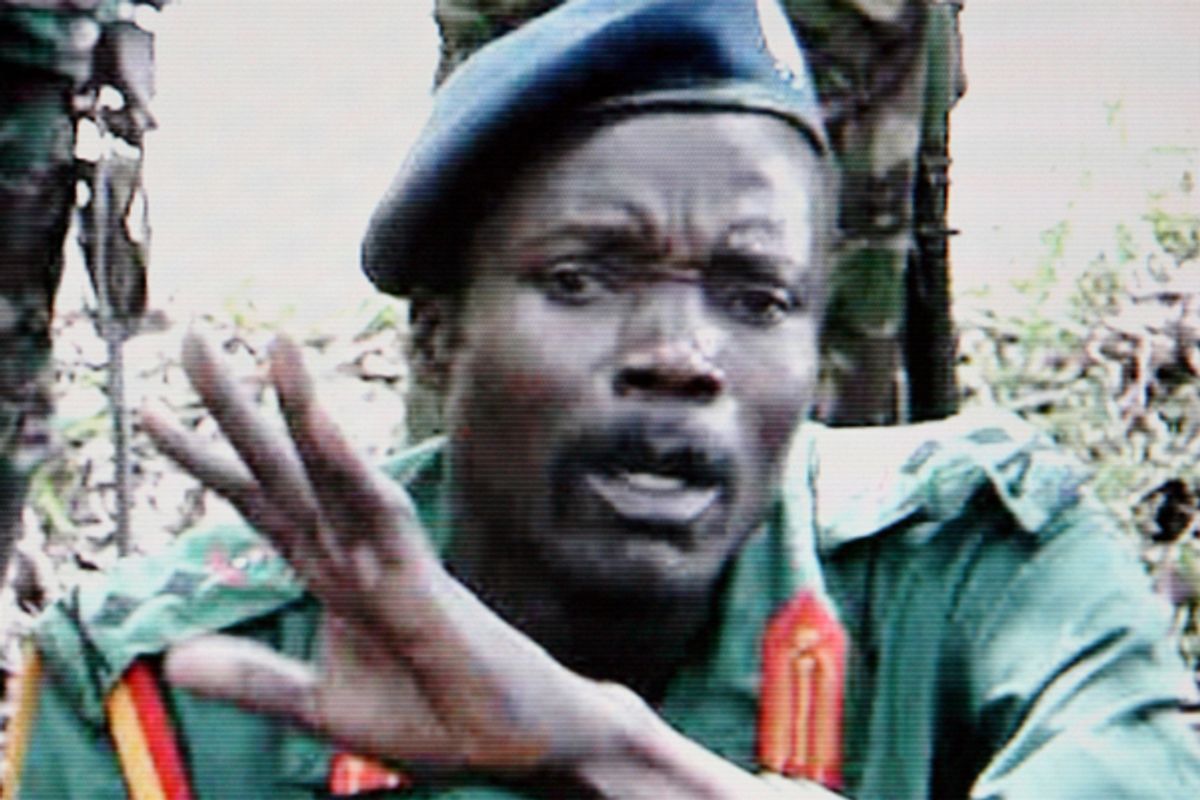 As more than 50 million viewers on YouTube of the Kony2012 viral video now know, Joseph Kony, founder and leader of the Lord’s Resistance Army, is a wanted man with the blood of many people on his hands. We’ve spent years investigating the horrors perpetrated by the LRA in central Africa  -- Uganda, Democratic Republic of Congo, Central African Republic (CAR), and South Sudan. We gathered evidence at massacre sites -- wooden clubs covered in dried blood, rubber strips from bicycle tires used to tie up the victims, and freshly dug graves --  and spoke to hundreds of boys and girls forced to fight for his army or held captive as sex slaves. And we’re elated that #stopKony is a trending topic on Twitter – if anyone deserves global notoriety it’s Kony.

The Lord’s Resistance Army began fighting the government of Uganda in the mid-1980s partly as a response to the government's marginalization of the people of the country’s north. It swiftly degenerated into one of the most brutal and merciless of armed groups, able to replenish its ranks only by abducting, terrorizing and brainwashing children to fight. Its forces, currently thought to number 150-300 fighters plus hundreds of captive civilians, left Uganda in 2005 and now operate in remote areas of Congo, South Sudan and the CAR, leaving a trail of death and destruction among all those in its path.

The group struck again in recent weeks, with attacks on villages in northern Congo. Residents of this region have already endured innumerable atrocities at the hands of the LRA, including massacres that took the lives of 865 civilians in late 2008 and early 2009. In our report, “The Christmas Massacres,” we documented these killings as well as the abductions of more than 160 children.

I remember clearly the story of a 72-year-old grandfather who had survived by hiding in the bushes and watched as the LRA slaughtered his family and fellow villagers. “The LRA were quick at killing,” he said to me only a few weeks after the attack. “It did not take them very long and they said nothing while they were doing it. They killed all 26. I was horrified. I knew all these people. They were my family, my friends, my neighbors. When they finished I slipped away and went to my home, where I sat trembling all over.” After the attack, on his own, he began the painful task of burying the dead. He remains haunted by the experience.

As we documented the LRA’s bloody trail, we found survivors desperate to tell their stories and afraid that the world would forget them. Many of the killings we documented in Congo and CAR received little international attention – so the Kony2012 video has already achieved something by spreading word of Kony’s infamy.

But the question is whether all this public attention, welcome as it is, will help lead to Kony’s arrest. And more important, whether it can jumpstart international action to stop the LRA’s abuses and protect civilians living in vulnerable areas

Human Rights Watch has long urged a concerted international response to assist regional efforts to arrest Kony and other LRA leaders, who since 2005 have been subject to arrest warrants from the International Criminal Court. Any such action requires stepped-up protection for civilians in the regions where the LRA operates to prevent the inevitable retaliatory attacks. There is also a dire need to rescue children and adults captured by the LRA – including many who are forced to fight – and to help those who manage to escape.

In 2010, the US Congress passed a law that called on President Barack Obama to develop a comprehensive strategy to protect civilians and to work with the governments in central Africa to bring the LRA leaders to justice. The law offered hope to many in the region who had long felt forgotten. US help has mostly come as logistical and intelligence support to the Ugandan armed forces, which has been pursuing Kony outside of Uganda for the past four years (though it has a long history of abuse).

In October 2011 the US announced it would send 100 US Special Forces personnel as military advisers to the Ugandan army and other armed forces in the region to assist in apprehending the LRA’s leaders. The US is also supporting efforts to transform the operation into an African Union-backed regional effort. So far this hasn’t yet resulted in Kony’s capture. Other countries – such as France and the UK – could also be doing more.

The LRA operates in extremely remote areas and is hard to track. Its three most senior leaders – Kony, Okot Odhiambo and Dominic Ongwen – previously communicated by satellite phone and two-way radios but no longer do so, military experts and former LRA members say, for fear their locations will be monitored. Instead they send messages via runners, or through occasional face-to-face meetings in isolated locations. The three senior leaders are now thought to operate in the CAR, with smaller groups carrying out attacks in South Sudan and northern Congo.

The governments in the region have not shown the capability or resolve to protect their populations from LRA abuses. UN peacekeepers are too few in numbers and have inadequate capacity to safeguard civilians much beyond the perimeters of their bases. The UN should be redeploying peacekeepers to the areas where communities are most vulnerable.

Countries willing to help should provide intelligence support to help track the LRA’s leaders and deploy more helicopters over these areas, including to drop leaflets telling unwilling LRA fighters how and where to safely demobilize (Uganda’s treatment of defectors has been uneven and problematic). And they should set up programs to help them overcome the horrors of their LRA experience and to build a future life.

Civilians in remote areas need an early-warning system to relay word of LRA attacks to get a rapid intervention from UN peacekeepers. Invisible Children, the group behind the Kony2012 video, helped to set up a radio system in northern Congo, but a cell phone tower network would be even more effective. The US government has committed to building such towers but implementation has been extremely slow.

Late last year, several local groups wrote to the presidents of Congo and CAR asking for more help. “Civilians in this remote region have no protection from LRA attacks, and often no means of communicating with others to call for help,” they wrote.  “We can only truly rejoice when the LRA threat is over and when we hear that Joseph Kony is no longer terrorizing our region. We have suffered too much and we are tired of living in total insecurity – afraid to go to our fields to farm and unsure when or where the rebels may surface again. We don’t know whether our children who were abducted by the LRA will ever come back home.”

A woman whose 13-year-old daughter had been abducted by the LRA in September 2008 told me: “I cry every day for her. You can't imagine what it's like to have your daughter taken from you. It makes me ill when I think about what they [the LRA] could be doing to her in the bush. I don't know if I'll ever see her again, or even if she's still alive.”

Arresting Kony and other senior LRA leaders would reaffirm that those who commit mass atrocities will face justice. It will also help end the scourge of one of the most brutal rebel groups in Africa.