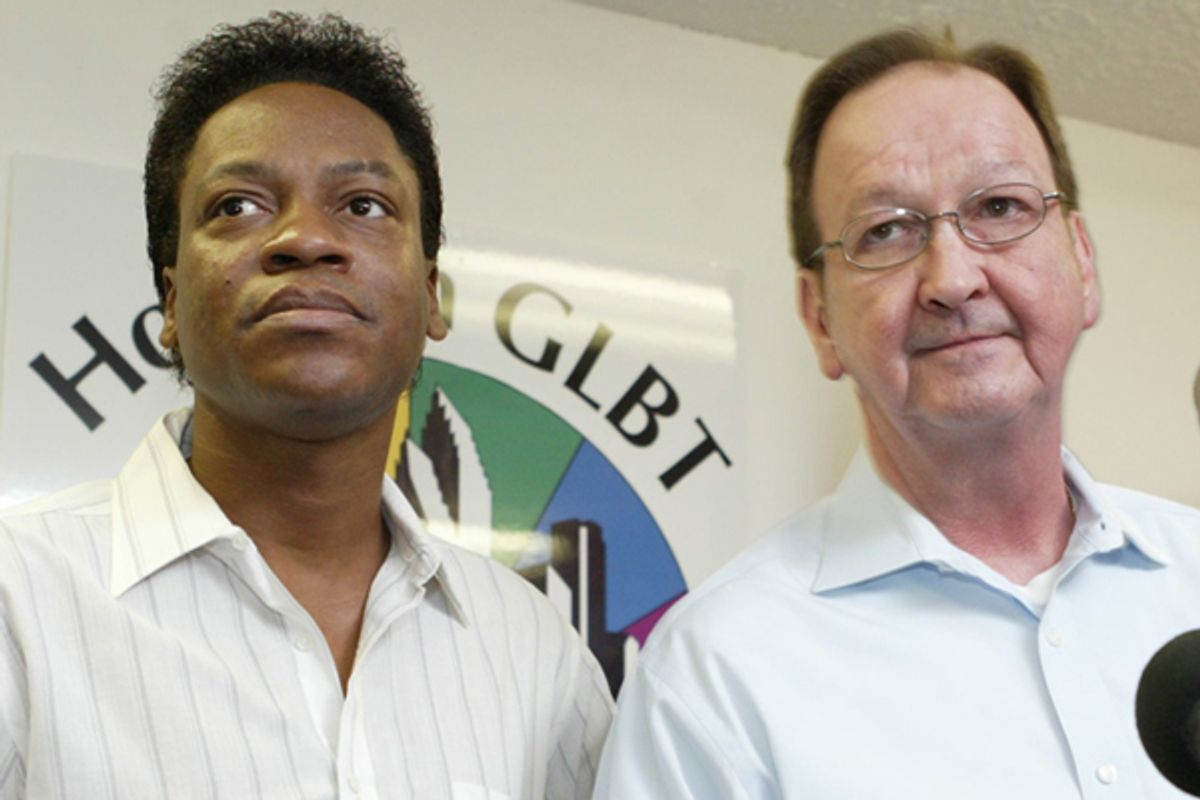 Law professor Dale Carpenter’s new book about the Supreme Court 2003 sodomy case, “Flagrant Conduct,” has been causing a stir with its claim that the plaintiffs who legalized same-sex sex for everyone weren’t actually having sex at all when they were arrested. Worse, rather than the camera-ready litigants people are used to in civil rights cases like the saintly Mildred and Richard Loving in the interracial marriage case, John Lawrence, and his one-night stand (or not) Tyron Garner, were lowlifes. They were caught drinking beer in a room with vulgar pornography on the walls when a jealous lover called the police. Lawrence and Garner were hardly the model of a devoted couple seeking protection from the jack-booted thugs of the overreaching state. “Philadelphia” this was not.

These revelations are hardly news. At least six years ago, Garner’s New York Times obituary included a clear description of the two individuals (and the jealous lover) involved, including the winsome tidbit that the lover had been beaten to death in 2000, and that Garner had been arrested for assault at least twice.

People who challenge criminal laws are almost never candidates for on-screen portrayal by Tom Hanks. Consider Ernesto Miranda, of Miranda warnings fame. Miranda was arrested while still in the eighth grade, was in and out of reform school, and died in a knife fight at a card game at the age of 35. He was so clearly guilty of the offense at stake in Miranda v. Arizona that he was convicted again in a trial where the state could not even use the confession they had extracted without warning him. Norma McCorvey, the Roe of Roe v. Wade, abused both drugs and alcohol and had already produced two children who had to be raised by others when she agreed to challenge the law against aborting her third pregnancy.

And people who want to challenge sex laws often have to force the issue. After two abortive tries to challenge Connecticut’s centuries-old prohibition on birth control, a Yale med school professor had to open a flagrantly illegal birth control clinic and sit down waiting to be arrested. The result was the famed constitutional decision Griswold v. Connecticut. Like the laws against sodomy, prohibitions on adultery, fornication and, most recently, birth control work by intimidation rather than by lawful enforcement. If brought to the light of day by the dispatch of policemen into the bedroom, such laws quickly fail the test of basic principles of a liberal democracy. But, as the Carpenter book reveals, the fact of criminality made all same-sex relations perilous and suspect, while the law remained unenforced and therefore unexposed to the cold light of a constitutional test.

It was a devilish predicament, which the gay revolution faced again and again. When the police raided the illegal, Mafia-run bar called Stonewall in 1969, the New York liquor authorities had long since stopped threatening to pull the licenses of bars with a gay clientele. Yet the constant pressure of the police on the bars that catered to gays created an informal oppression that only ended when the Stonewall patrons rose up.  Indeed, long before Lawrence, a posse of gay activists in Los Angeles had to cook up a citizens’ arrest of six admitted sodomites in order to force the issue of the constitutionality of California’s sodomy law, in face of local authorities’ unwillingness to enforce the darn thing.

Lawrence and the rest didn’t have to be paragons of virtue. Comparing them to the Lovings is a categorical mistake. They weren’t asking, as the Lovings were, to be included in one of the most morally freighted, traditional institutions of social approval, marriage. They were asking to be left alone, a founding principle of any liberal democracy. When the time came for the gay revolution to take on the constitutionality of fortress marriage, activists correctly pursued a completely different course. No beer-swilling pornography collecting random plaintiffs for the uber-respectable Republican icon Ted Olson and his Democratic sidekick David Boies. The named plaintiff in the California gay marriage case,  Perry v. Schwarzenegger is a soccer mom who actually ran the state's program advocating for children newborn to 5 years old.

Realizing that the gay movement was harvesting the appeal of their Cleaver-style family litigants, Rush Limbaugh recently tried to get some traction against same-sex marriage by pointing out that one of the iconic couples married when California allowed it was divorcing. In the American tradition of simple equality, if heterosexuals like the serial marriers Rush Limbaugh and Newt Gingrich can avail themselves of the institution, gay and lesbian fiancés, however unappealing, should be able to do so as well. The gay movement has been brilliantly strategic in its choice of symbols in the marriage fight. But victory will surely be at hand when someone as raffish as John Lawrence and Tyron Garner can stop by the Elvis chapel and tie the knot.