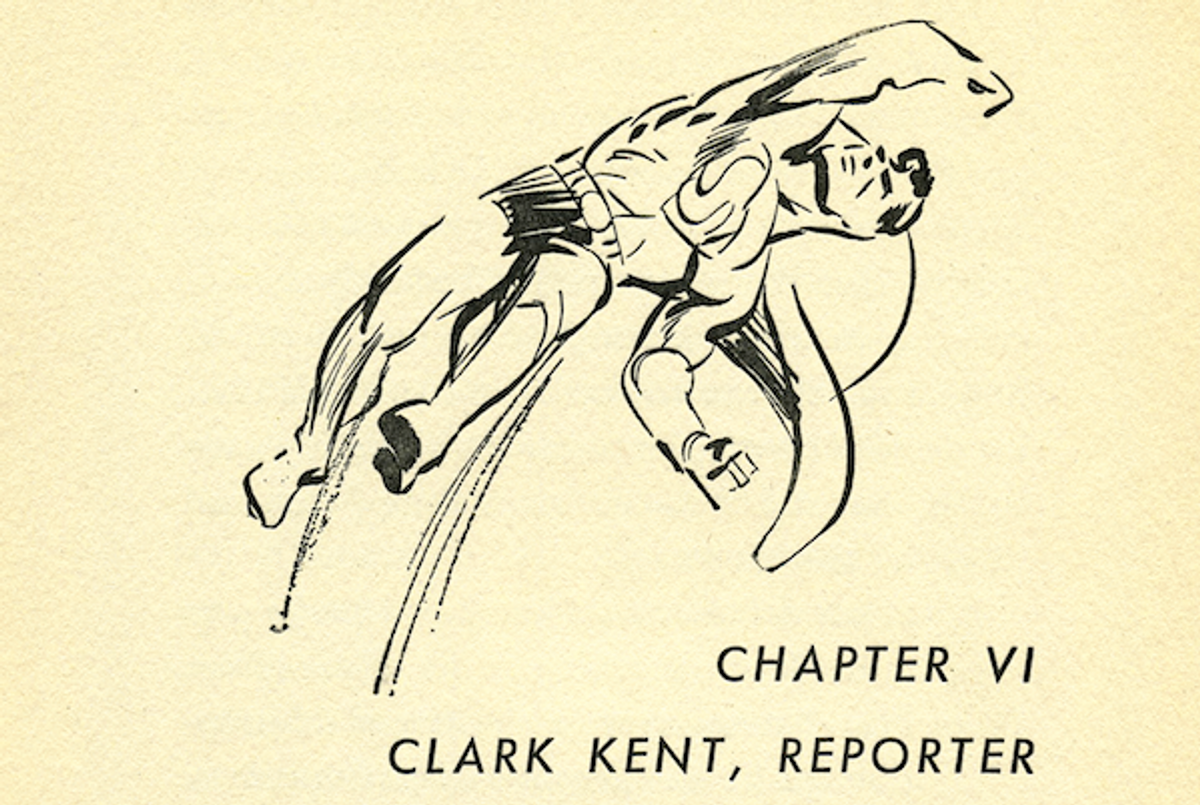 I used to spend a lot of time as a kid visiting antique (actually, “junk”) shops. It was like visiting a museum, except you pick up stuff and hold it. One of the things I found (probably around 1972) was a book by author George Lowther from 1942 about Superman. I’d never heard about this novel and considering the amount of time I spent obsessing about comic books, I was surprised and puzzled by it all of a sudden popping up! It would take quite a few years and the availability of the Internet before I could find out anything substantial about it. Basically, it was a rare book but unless it was in beautiful condition with a dust jacket it didn’t command an outrageous price. It's interesting to note that Lowther, in this, Superman's first novelization and first story credited to someone besides Jerry Siegel, was responsible for defining Superman's birth, early life, and the first detailed description of life on doomed Krypton. He also officially named Superman/Kal-El's parents Jor-El and Lara ― who'd previously been known as Jor-L and Lora...

As much as I’d hoped that I'd stumbled across a priceless gem, I wasn’t disappointed because of the great illustrations by Joe Shuster! Let me correct that – I wasn’t disappointed because of MOST of the great illustrations by Joe Shuster. Each opening chapter page in "Superman" includes a black-and-white pen/brush and ink illustration. These tasty, gestural pieces of inspiration seemed out of place to me. They are so immediate and almost impulsive – also, not what I would expect from a book produced in 1942. I would imagine that this must have been a rare “behind the scenes” sort of approach to take back then. It also puts a focus on the artist as opposed to the character – another rarity. I’m aware that both of Superman’s creators, Jerry (Jerome) Siegel and Joe Shuster received credit on early splash pages of their comic stories, as did Bob Kane with Batman, but this seems different to me. This artwork is daring in its loose expression and vitality, and I can’t think of another (can’t wait to see what THIS comment garners...) similar circumstance.

But hold on – this is where it gets interesting, or disappointing. There are other illustrations in the book that almost seem to be done by another artist. They’re stiff and wooden. They’re overworked and totally lack the energy and confidence that the gestural sketches possess.

[caption id="attachment_267781" align="aligncenter" width="460" caption="(If you flop this image it's strangely reminiscent (in more ways than one) of "Dempsey & Firpo" mentioned below.)"]

The closest comparison I can make also comes as a result of my college American Art History class, and it concerns the work of George Bellows. I can still remember sitting in class and looking at examples of Bellows’ art. It was going to be hard to find paintings by any artist that would excite me as much as his “Stag at Sharkeys” and “Both Member of This Club”!

But then comes “Dempsey & Firpo”. WTF?! All that energy and expressiveness gone. I could never figure it out. . .

I would love to know the back story regarding the choice and execution of art for the Superman book ...

Soon after the book's release, there was an Armed Forces edition issued. These were unabridged versions (but sans illustrations) done in a smaller, more compact paperback format. Easy and more manageable for a serviceman to carry ...

The book has garnered enough attention that it’s been reprinted by two publishers. Kassel Books did a soft bound edition in 1979 and did such a limited printing that even though it’s a reprint, it commands a decent price for paperback ― if you can find it. Applewood Books published a hardbound run in 1995 that is still relatively available but also averages about 40 bucks...