To reclaim or reject "slut"?

The Limbaugh controversy is a perfect example of the complexities of reappropriating, or renouncing, the slur 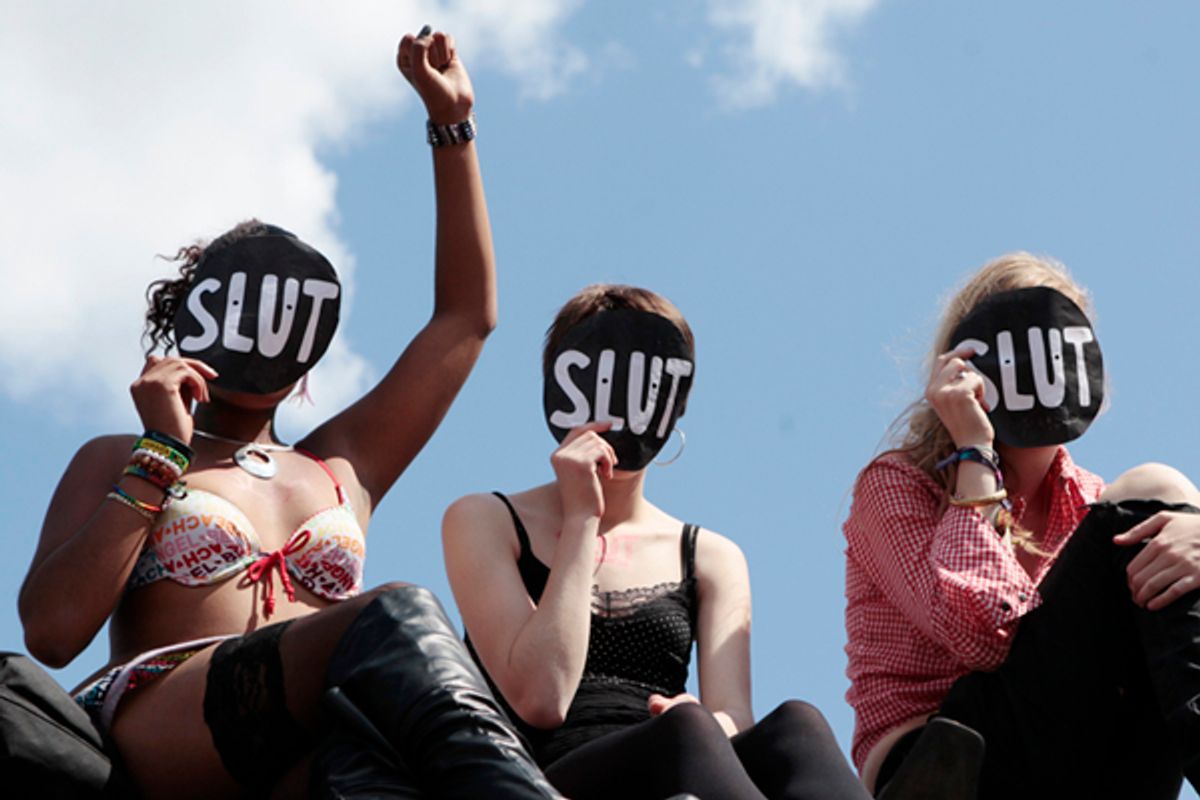 Until now, reclaiming the word "slut" never appealed to me. I fully supported the message of SlutWalk -- that women don't ask to be raped by dressing a certain way -- but I had no interest in applying the slur to myself. But this Limbaugh thing has me singing a different tune.

I'm not exactly scrawling "slut" on my forehead, but suddenly, reclaiming the word seems potentially exciting. I'm not the only one recognizing a shift in the conversation about reclamation. Megan Gibson of Time wrote, "While the motivation [for SlutWalk] was inarguably sound ... the protest caused controversy, in part because many were wary to associate themselves with the word slut." She continues, "Remarkably, thanks to Limbaugh’s ignorant vitriol, we're seeing a marked change in that wariness."

That said, in identifying with Sandra Fluke, the target of Limbaugh's rant, some women have instead chosen to distance themselves from the term, which perfectly illustrates how complicated reclamation can be.

Feminist activist Jaclyn Friedman points out that the message here is, "Just because I use birth control doesn't mean I'm a bad girl" -- which might imply that some women are bad. "The problem with the 'iamnotaslut' hashtag is that it creates a line," she explains. "[It says,] 'I'm a valid spokesperson on this but women who have lots of sex are not.'"

Fluke is such a sympathetic character in part because her testimony -- contrary to Limbaugh's bizarre interpretation -- wasn't about sex; it focused on women who need birth control for reasons other than pregnancy prevention (specifically, polycystic ovarian syndrome and endometriosis).

"It's a way to categorize and differentiate yourself, that you are deserving of respect," says Leora Tanenbaum, author of "Slut! Growing Up Female With a Bad Reputation." It's not all that different from what she observed among teenage girls while researching her book: The slur was most often used by girls, not boys. It's a way for girls and women to displace anxiety about their own sexuality. "It's a classic scapegoating technique," she says.

The Limbaugh affair is a perfect example of how reclaiming, or rejecting, the term is immensely personal and dependent on context -- and it goes much deeper than either SlutWalk or SlutRush. As many have pointed out, the word "slut" comes with different baggage for many women of color. A letter written to the organizers of SlutWalk and signed by hundreds, read, "As Black women, we do not have the privilege or the space to call ourselves 'slut' without validating the already historically entrenched ideology and recurring messages about what and who the Black woman is. We don't have the privilege to play on destructive representations burned in our collective minds, on our bodies and souls for generations."

How individual acts of reclamation are understood by others is also dependent on context. "If you're with a girlfriend and you're like, 'Yo slut,' or whatever, everybody laughs and you all understand that you're being ironic," says Tanenbaum. "You can be ironic when you're with people that get the irony."

One of the major arguments against reclamation at this point in time is that not enough people get the irony. "It may sound funny for me to say, because I did write a book that's called 'Slut!,' but I do have a problem with taking back the term," says Tanenbaum. "In order to successfully reclaim the term 'slut' we need to be in a place where more people have their awareness raised and are cognizant of the sexual double standard and what that means for women's sexuality and freedom." It's still "too much of an in-joke," she says.

It also means different things to different reclaimers, depending on the context they use it in. Bikini Kill's Kathleen Hanna once explained her early-'90s performances with "slut" scrawled on her stomach, like so, "I thought a lot of guys might be thinking this anyway when they looked at my picture, so this would be like holding up a mirror to what they were thinking." It was a way to preempt critics. Friedman gave a similar explanation for why she chose "My Sluthood, Myself" as the title for a personal essay she wrote about her experience with Craigslist's Casual Encounters.

"Slut" can also "denote an uninhibited, adventurous and celebratory approach to sex for both men and women in all their magnificent diversity," says Dossie Eaton, author of the classic "The Ethical Slut," which was published in 1997. She says, "In the wondrously explorative '70s, I learned that gay men use the word 'slut' as a term of admiration and approval, as in 'What did you do at that party? Oh, you slut!'" Similarly, the organizers of SlutWalk Seattle wrote in a blog post that "slut" serves as a "sex-positive" term for individuals "who have and enjoy frequent consensual sex, especially with multiple partners."

In reaction to Limbaugh's remarks, saying, "Yes, I'm a slut!" feels to me like saying, "Yes, I'm a woman!" My comfort in this case might speak to a lack of daring: It's certainly less bold to align yourself with "sluts" who use birth control and testify before Congress in conservative professional attire than with "sluts" who raucously march through the streets wearing fishnets and bustiers. Maybe on an emotional level I buy into the notion of good girls and bad girls.

The truth is that, as a slur, "slut" is used to control the sexuality of all women. It can be leveled at any woman, regardless of sexual experience or dress. There is no strict definition of what a slut is -- there is no set partner count, no percentage of exposed skin. Part of the difficulty of reclaiming "slut" is that it's such a divisive term, but that's also part of the argument for reclaiming it.