After 10 years of tragedies, even the most horrific killings are unlikely to have major consequences in Afghanistan 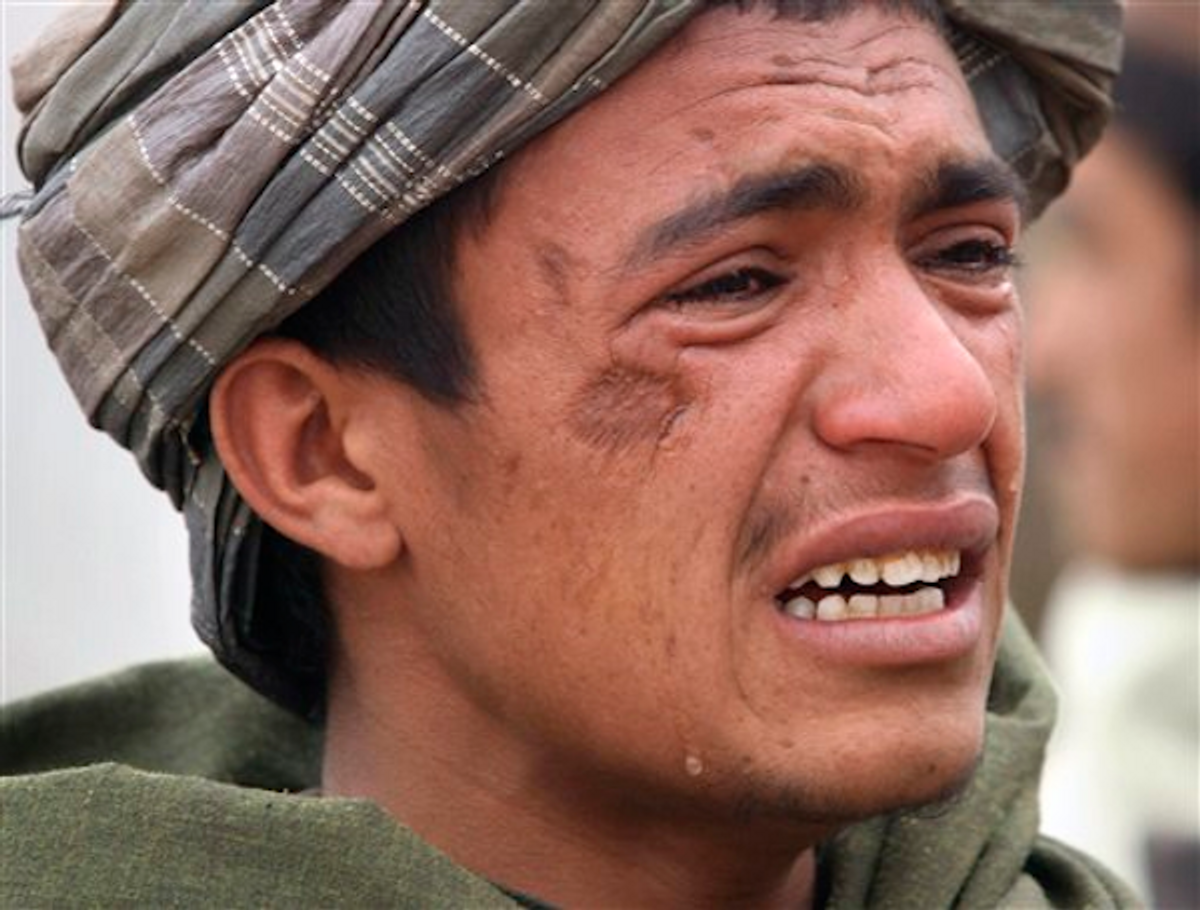 An Afghan youth mourns for relatives, who were allegedly killed by a U.S. service member in Panjwai, Kandahar province in Afghanistan, Sunday, March. 11, 2012 (AP Photo/Allauddin Khan)
--

The news could hardly be worse: a soldier in Kandahar went on a shooting spree, killing 16 civilians, mostly women and children. The outpouring of shock and anger has been tremendous and, to diplomats still reeling from the violent aftermath of a Quran-burning incident, extremely disheartening.

The Afghan parliament closed its doors for a day and said that any effort to sign the long-delayed Strategic Partnership Agreement with the United States would amount to a “betrayal” of the country.

The Taliban vowed revenge against the “sick-minded American savages,” and will undoubtedly reap a public relations boost from the tragedy.

Karzai is in a more precarious position: While he cannot afford to seem weak or puppet-like to his constituency, he is highly dependent on the United States for his physical and financial well-being. He may wave his fists and rail against the cruelty, but he is unlikely to ask his protectors to leave.

Noticeably absent from the Afghan reaction to the horrific murders are the kind of violent protests that swept the country over the past weeks in the wake of the Quran-burning incident at Bagram Air Base, near Kabul.

This is unlikely a sign that Afghans are ready to understand and forgive, analysts said. Rather, it is an indication of just how badly the situation has deteriorated over the past few years.

“Afghans protest when something is shocking and surprising,” said Joshua Foust, a fellow at the American Security project, a nonprofit, bi-partisan public policy and research institute based in Washington, DC. “But this is something that they are used to and expect. They consider all civilian deaths criminal. This is just more of the same.”

It may seem counterintuitive that Afghans will take to the streets, kill or injure themselves and damage their own property, to protest an insult to their religion, but maintain relative calm when their loved ones are killed.

Last week’s protests against the Quran burnings were not unique; in 2005, a story in Newsweek magazine that US soldiers had flushed Qurans down the toilet set off a storm of anger that left 17 people dead.

When a Danish newspaper published cartoons of the Prophet Mohammad that Muslims found insulting, embassies in Kabul were stormed, thousands rioted and several people were killed.

There have never been similar outpourings of violence against the deaths of civilians. For those, sorrow far outpaces anger, as Afghans resign themselves to the horrors of war.

The issue of civilian casualties has long plagued U.S.-Afghan relations. Karzai has railed against night raids that violate homes and sometimes target innocent individuals, airstrikes that sometimes go astray and cause numerous deaths, and operations that do not take adequate precautions to protect the civilian population.

The United States, while often expressing regret at the loss of civilian lives, considers such collateral damage to be the price of war.

“Afghans are not making the moral distinction we are,” Foust said. “[These shootings are] not a game changer, it is just another aspect of the same game.”

As proof, Foust pointed to a case in Kunar in 2011, in which nine boys out collecting firewood were targeted and killed by U.S. helicopter gunships. The deaths sparked outrage among Afghans, while the American military insisted it was simply the inevitable consequence of war.

Numerous examples of civilian deaths have beaten the Afghan people down to the point where they simply do not expect anything else, Foust said.

This is hardly a comfortable commentary on a war that most Americans still think is about freeing Afghanistan from the yoke of fundamentalism, and helping it become a modern, democratic state.

The real change in the wake of the killings is likely to come in the United States, Foust said, where opposition to the war is growing.

“The thing is, Americans’ view of the war has been so sanitized and euphemized by the mainstream media that we really don’t know what is going on,” he said. “This might change that.”

The contenders for the White House will certainly not ignore the issue, he added.

“Opposition to the war is growing even in the GOP,” he said.

Afghanistan was not front and center in the last election. But now that the situation seems to be deteriorating still further, the war is yet another stick the Republican candidates can use to beat President Barack Obama.

Appearing on Fox News Sunday, former Speaker of the House Newt Gingrich gave a very negative assessment of the prospects for a real peace in Afghanistan.

“There's something profoundly wrong with the way we're approaching the whole region and I think it's going to get substantially worse, not better,” said Gingrich, when asked about the reaction to the killings. “And I think that we're risking the lives of young men and women in a mission that may frankly not be doable."

This is in marked contrast to previous calls to “finish the job” that have sounded among the presidential hopefuls.

But finishing the job may no longer be a real option, Foust said.

“The thing is, our goals were always so vague that we have either already accomplished them or cannot possibly do so,” he said.

In the wake of the recent murders of six soldiers in Afghanistan, most likely in response to the Quran burnings, calls for an accelerated withdrawal might become even louder.

“It is much more likely now that the withdrawal will go ahead, despite some calls to delay or even reverse it,” Foust said. “It might even accelerate the process. But we do not yet have enough information to make a realistic prediction.”

Americans, he said, should be under no illusion that the shootings, which are the work of a lone soldier most likely suffering from mental problems, will substantially affect the outcome of the war.

“People ask me ‘Is this going to change things? Does this mean the war is lost? I say ‘No. Probably not. The war was already lost by 2009.’”