Loan debt is growing, they're stuck in service jobs, and people keep telling them to go to North Dakota 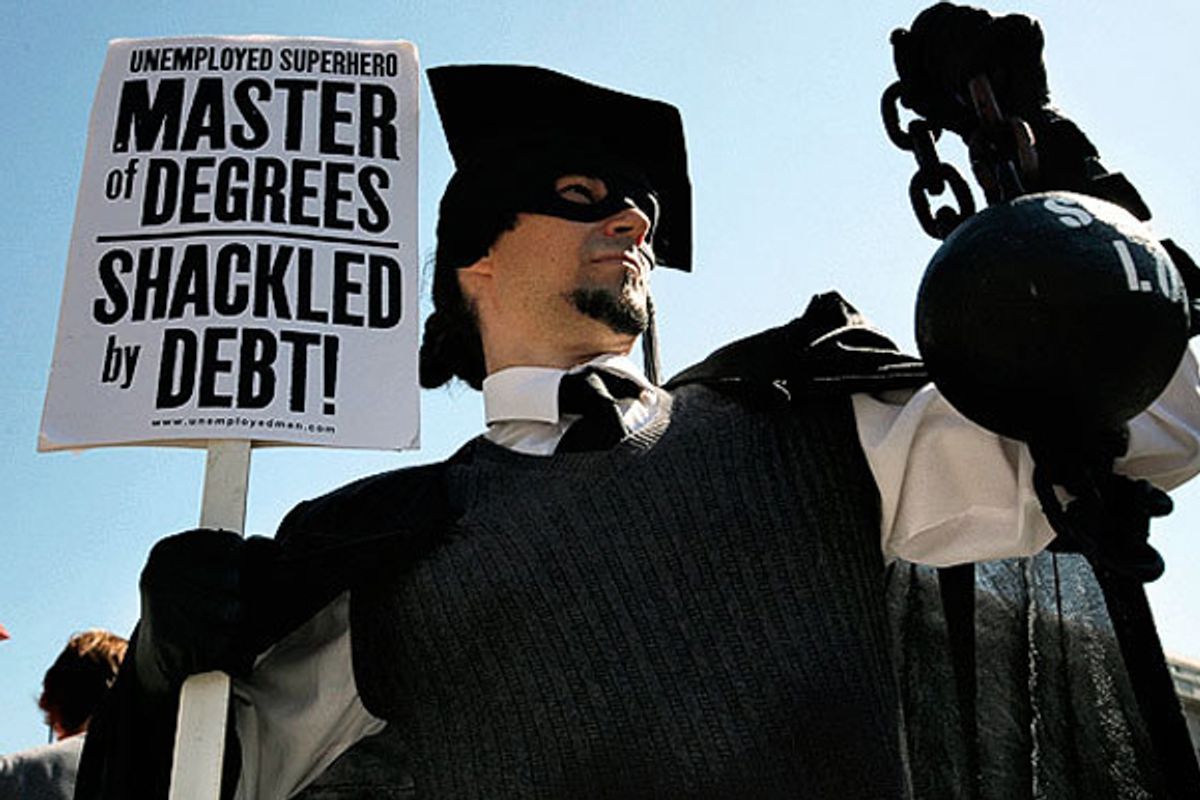 A protester holds a ball and chain representing his college loan debt during an Occupy DC protest in Washington. (AP/Jacquelyn Martin)
--

Just in case anyone decided to "scam" themselves some free higher education by going to college and then declaring bankruptcy, Congress decided in 1998 to make sure that student loan debt had no statute of limitations and could not be discharged except in the event of extreme (and effectively unprovable) hardship. Then tuition began skyrocketing, players like Goldman Sachs got into the student lending business, and middle-class job opportunities for people without college degrees disappeared. The result, naturally, has been extremely profitable for certain people (Lally Weymouth) and basically awful for everyone else in America. Now, Eric Pianin is in Lally Weymouth's Washington Post saying that student loan debt might be "the next debt bomb."

The debt bomb warning comes from William Brewer, head of the National Association of Consumer Bankruptcy Attorneys. Unfortunately, there isn't much bankruptcy lawyers can do for people seeking relief from education debt, on account of the various laws passed since the 1970s making sure education debt stays inescapable. And it's not just rotten spoiled kids who are suffering!

College seniors who graduated with student loans individually owed an average of $25,250, up 5 percent from the previous year, according to a study by Brewer’s group. Parents are responsible, on average, for $34,000 in student loans, a figure that rises to about $50,000 over a standard 10-year repayment period. An estimated 17 percent of parents whose children graduated in 2010 took out loans, a 5.6 percent increase from 1992 and 1993.

But once you graduate, your incredible earning power will make paying those loans back a breeze, right? I mean, maybe, if you graduated with a degree in "my parents own a bank." The good news is that a little bit more than half of the class of 2010 got a job by the spring of 2011, and the median starting salary for students graduating from four-year colleges has only declined about 10 percent since the mid-2000s! (Sorry, not "good news." I mean "the additional worrying indicators.")

Of the employed recently graduated, a larger number than ever had decided to go for a lucrative career in "food service," where they can expect to make sub-minimum wage and have no healthcare or job security, just like all the non-college educated workers currently enjoying the freewheeling service industry lifestyle.

Some depressing facts: Nearly half of people ages 16 to 29 do not have a job. A quarter of those who do work in hospitality—travel, leisure, and, of course, food service. A study of 4 million Facebook profiles found that, after the military, the top four employers listed by twentysomethings were Walmart, Starbucks, Target, and Best Buy. The restaurant industry in particular is booming; one in 10 employed Americans now work in food service—9.6 million of us. Those numbers are growing each year. Even though more and more laid-off, middle-aged Americans are turning to restaurant jobs, as of 2010 about two-thirds of food service workers are still under age 35. And the industry’s workforce is more educated than it was just 10 years ago. In major U.S. cities, about 9 percent more food service workers have been to college.

Aronowitz also tells the tale of the ongoing fight to unionize Minneapolis locations of Jimmy John's, a Midwest sandwich chain. Unfortunately, unionization of the restaurant industry faces some very steep hurdles: Workers from middle-class backgrounds always think their crummy job situations are temporary, and those with working-class or working-poor roots are scared to do anything to jeopardize their jobs. Profit margins are slim, workers are easily replaceable, and the major unions don't have the wherewithal or the resources to engage in mass organizing.

The fact that the children of the middle class, and not just the easily forgettable poor, might be stuck in this kind of work for the long haul might eventually lead to reforms, but in the absence of a functioning food service labor movement, it's hard to see where the reforms might actually come from.

But don't worry! Sanctimonious, out-of-touch haves will never give up the fight to prove that every single horrible national trend afflicting young people is actually a result of the moral failings of said young people! Just ask Todd Buchholz, former George H. W. Bush economic avisor, and his daughter Victoria, a student of some kind. In their much-emailed New York Times Op-Ed on how kids today refuse to get drivers licenses because Bruce Springsteen started putting out depressing music in the 1990s, the Buchholzes demand to know why, if it's so hard to get a job, kids today don't pack up and move to North Dakota, where unemployment is currently low. (Victoria Buchholz, for the record, attends Cambridge, not NDSU.) This generation's refusal to act as interchangeable units of labor and their constant misuse of the word "random" are both related, and worrying, signs of America's decline.

Get off Facebook and go to North Dakota to extract some oil from shale! Right now! Following a natural resource boom to a currently sparsely populated region has always worked for everyone throughout history. If by the end of this winter you aren't engaging in hydraulic fracturing by day and sleeping in your car by night because there is no affordable unoccupied housing in North Dakota, you have no right to complain about the massive destabilizing generational shifts in job availability and security that have forced you to prolong your dependence on your similarly debt-burdened parents or else rely indefinitely on a series of menial service jobs!

(How come no one ever asks if maybe it's North Dakota's fault that no one wants to live there?)