Should we fear a cashless society? 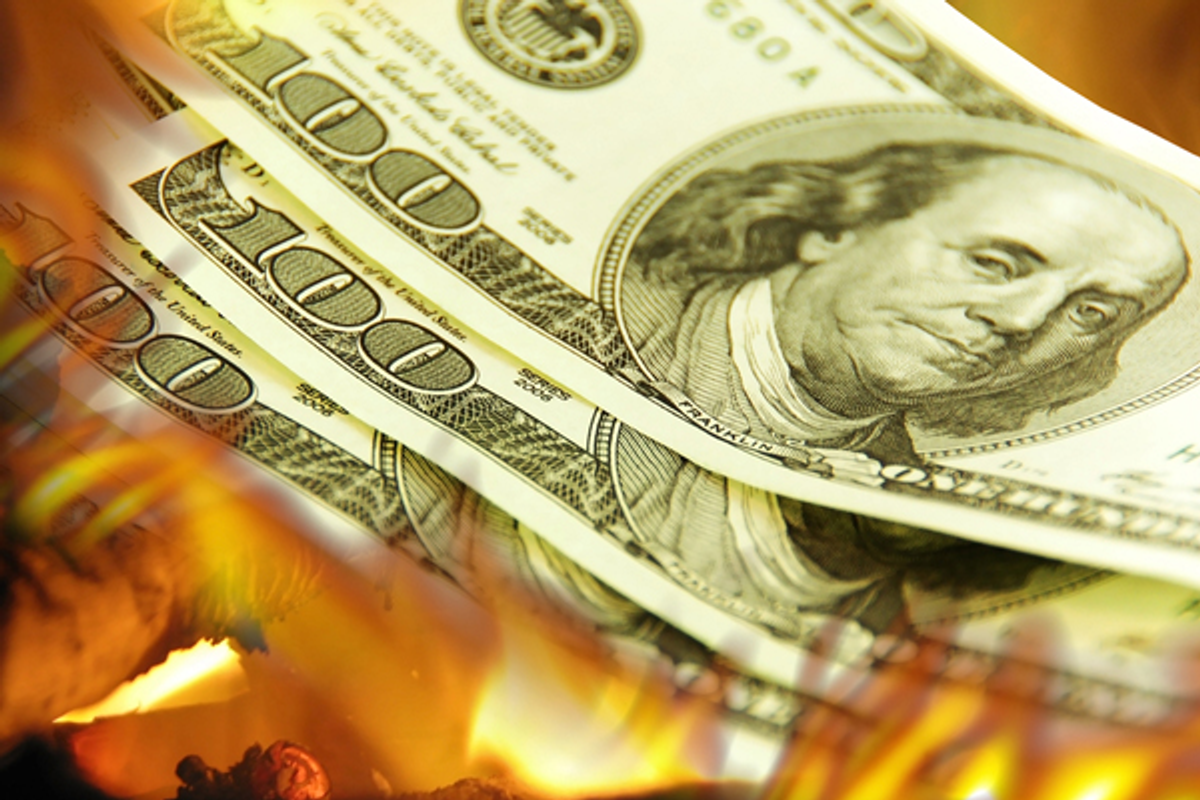 Why are those grimy green slips of paper in your wallet infused with such value? Will they always be valuable? Or will they become relics? David Wolman's new book "The End of Money" answers all of these questions. A contributing editor at Wired magazine, he spent a year reporting on how money is changing -- and during that year, he went without cash when conducting transactions.

In the book, he argues that while a fully cashless society may be in our future, it's not necessarily something to fear. While it may strengthen major banks and the ever-snooping police state, it could also birth currency innovations that circumvent those institutions entirely. Here's an edited transcript of my AM760 interview with Wolman. You can listen to the entire podcast here.

I've found in my own life that I actually go to the ATM less than I had been in the past, not because I had been necessarily spending less money but because I don’t need cash as much. Are we on the verge of becoming a society where nobody uses any cash whatsoever -- and if we are on the verge of that, what are the good parts of that and the bad parts?

The best way to think about it is cash being subjected to death by a thousand cuts. Right now no one knows if we’re at cut 899 or 941, but we’re definitely over 700 I would say sort of casually, and we’re well on our way. It’s sort of getting pushed to the periphery by a number of different forces and one is what you mentioned right there, we just seem to need the ATM less in our everyday lives, and this is from the wealthy or western countries perspective. We have the luxury of toggling between cash or electronic money.

I imagine you’re not paying your rent or your mortgage with piles of singles anymore, let alone your car payments or buying a sweater. Most of us are using cash for super small purchases like cigarettes or a Twix bar or coins into a Unicef box at Halloween. So that’s where cash is at present. And that’s one kind of force kind of pushing it aside. The problem is there are still people who depend on cash for the lions share of their income especially in the service sector. Waiters and bellman and taxi drivers.

Obviously, I don’t want to get rid of it tomorrow because I don’t want to stiff the 99 percent out there who still need it for income. But when it comes to phenomena like tipping there are going to be technologies to cover that very soon, especially through the mobile phone. These technologies are coming whether you like it or not and for some kind of perspective, the credit card companies have been around since the 1940s but they didn’t really pick up steam until the '80s when it became much more widely available.

This was my way to keep the meditation about cash at the forefront of my mind everyday. Even if it wasn’t a big reporting and writing day and I was running errands or taking care of my son, I had to keep it running in the background almost like a soundtrack.

A lot of the times it didn’t matter, because a lot of our lives are pretty cashless. But there were a few hiccups: some embarrassing, some comical, you know, I felt like a grinch running by the local lemonade stand in the summertime with the same excuse. I never got a shoe shine or anything like that, but things took a more ironic turn when I tried to board a train in New Jersey destined for the financial center of the universe, in Wall Street for a last minute meaning. You can’t even pay a New Jersey Transit Authority [official] with anything but those filthy pieces of paper or coinage. And things took a much more serious turn when I went to India to report on this mobile phone payment technology revolution. Before the wheels of the plane even hit the ground, I thought, I gotta get some cash. If I want to do anything outside of my hotel in a developing country I’m gonna need cash. So the experiment had to go on hold for those six days of reporting overseas.

One of the arguments against getting rid of cash is that once we become a fully cashless society then basically we have put big corporations even more in the center of our lives. Cash is the one way within our financial architecture to avoid both having our financial transactions skimmed off the top of by credit card companies, and it’s also a way to avoid basic scrutinies of our transactions. How powerful is that argument and will corporate power in a cashless society inevitably be abused?

That’s the central question, and it’s something I address a lot in the book. Some of this has to do with the distinction between what is anonymity and what is privacy. Even though everyone loves cash for the anonymity of it, it’s not really something that goes along with our lives in a modern democracy. There’s nothing that guarantees your anonymity in the Bill of Rights.

So this is the tension between civil liberties and privacy. It’s why we have cameras on subway platforms in case there’s ever a violent crime committed, and I really don’t think there’s a way to dismiss privacy concerns, but most of us think it’s probably okay for law enforcement to have some kind of break-the-glass access to information about who was on that train platform when a crime was committed. It’s the same way we deal with airport securities and on and on it goes.

I’m sensitive to those concerns, but we’ve kind of relinquished so much of our financial lives to the banks and credit card companies already. I don’t say that to say we might as well go the final 2 percent here, I think it’s the other way, that when you talk about cashlesness and finally going 100 percent cashless, you see it kind of brings these fears to the surface in a way that people don’t really think about even though they’re never really using cash.

Though the difference between the train platform metaphor and cashless economy is that you’re making transaction, the train platform is a public piece of property, it is in a place that we acknowledge as public. But lots of people say they don't want their transactions to be public. Do we have a right to that expectation of privacy?

They say they don’t want transactions to be public, but then when your credit card company calls you to say, "Hey were you in Hong Kong yesterday and did you buy this $12,000 diamond necklace," and you say, "No, I didn’t." That intervention is because they were monitoring transactions.

Of course, when we talk about monitoring transactions that’s scary and sort of Big Brothery talk. I’m not excited about that either. But do we want the authorities for example to know that somebody in the mountainous region of Pakistan is suddenly wiring a lot of money to Sacramento? I think that really does matter.

But the bigger question to cashlessness really is the idea that it’s either cash or the credit card companies. I actually think that when we go cashless, people would wake up to this great flowering of payment options that are out there and we’ll be more demanding of the banks and mobile services to lower their fees and provide us with the service we can be confident with. That’s why PayPal was so successful, because they finally convinced people: you can do this securely. It’s not perfect but it’s safe enough that people are game to go along with it or it wouldn’t be the gazillion dollar company that it is today.

So people are seeing options coming. Some are still worried that doing away with cash means enriching the fat cats at Mastercard and Visa, but that's really a false dichotomy.

Can we ever really get rid of cash in this sense? We call the bills in our wallet cash, but if we immediately eliminated all of that there would still be an economy that existed on other currency -- or maybe even bartering.

Cash in this book is rectangular slips of paper and coinage. What you’re talking about is money, and money is an idea. And even though the title of my book, "The End of Money," what we’re really talking about is the end of money in it’s most commonly understood form -- the stuff that doting grannies give to their grandkids.

So that’s the end of dirty green paper, but money is just an idea, and if you and I are comfortable with the idea of this pair of dirty socks is a sufficient medium of exchange when you hand me a lampshade you just made. If you believe those socks have value, that has now become a form of money.

To me, that kind of illuminates the magic of money and reminds us that this is not just a technology but incredible human achievement and accomplishment, that we all can infuse this stuff with such power based on faith.