The trouble with "crowd-sourced intervention" 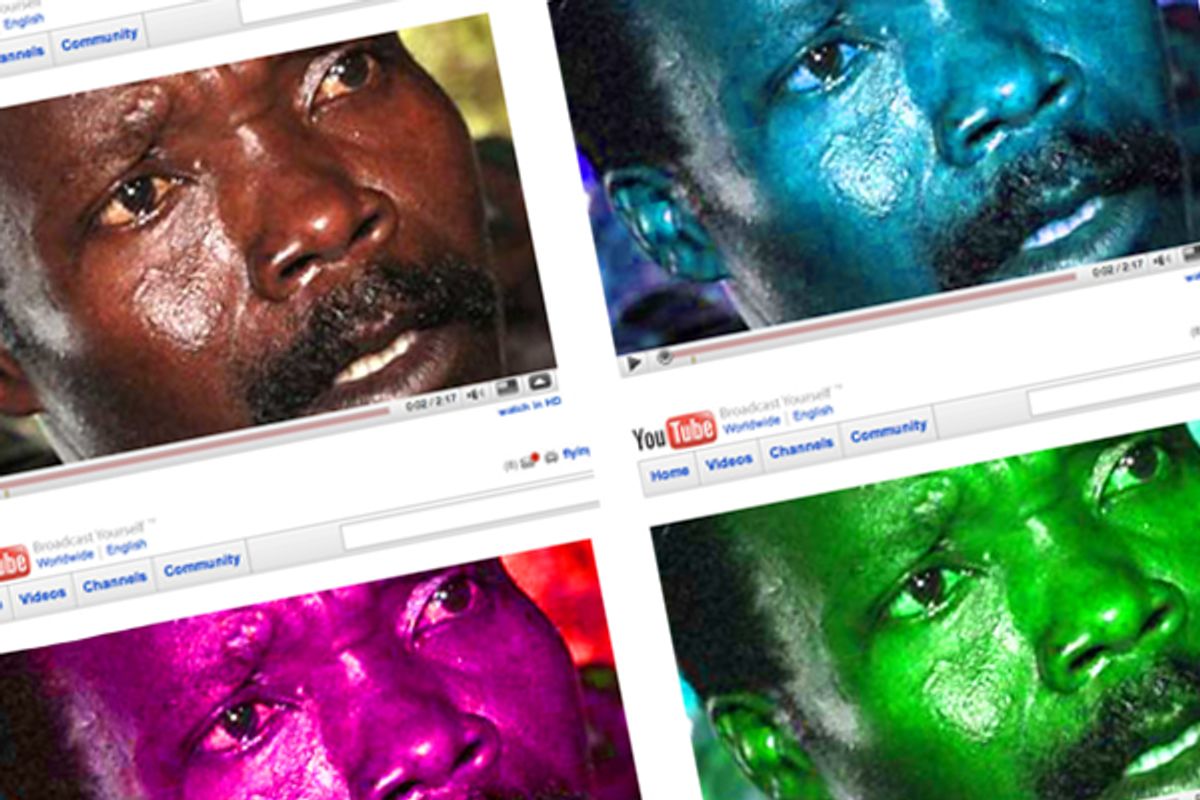 Invisible Children has recently raised the global profile of Joseph Kony and the Lord’s Resistance Army through its hugely successful #K0NY2012 media campaign. The Kings of War blog calls the campaign "crowd sourced intervention." Like Mark Kertsen, I do not intend to take aim at Invisible Children as an organization, but the group's success makes it more urgent to debunk some of the myths  now surrounding the LRA, U.S. intervention and foreign advocacy.

The popularity of the viral video raises the question: Why did Washington start sending advisors to help the Ugandan army track down the notorious Kony in late 2011?  Down to several hundred fighters and stuck moving between these four countries, Kony was still a monster and a danger to regional security, but his scale had been reduced.

Did Washington intervene because in 2006 Invisible Children first produced a widely watched documentary on the Lord's Resistance Army? Or was it because in 2011 with "just" several hundred fighters left, Kony had become a more manageable problem than he was before? Given our relationships with state militaries that conscript minors, including the Ugandan army, we know that images of teenagers wielding AK-47s do not drive the White House and the Pentagon to act.

In fact, the U.S. government is intervening militarily to show support to our ally, Uganda – even though Kony is most likely hiding out in South Sudan, the Central African Republic or the Democratic Republic of Congo. The dispatch of 100 U.S. troops to aid the Ugandan military in tracking down Kony had much more to do with an effort of the Pentagon's new Africa Command, known as AFRICOM,  to show our gratitude to Ugandan President Yoweri Museveni for his intervention in Somalia than the efforts of Invisible Children or the sudden discovery that the doctrine of  “responsibility to protect” should apply in sub-Saharan Africa.

Invisible Children has found AFRICOM’s focus to be a convenient way to champion its cause. The group is not necessarily part of an integrated AFRICOM effort to reach further into Central Africa and the Horn – though, certainly, a side effect of IC’s advocacy will be this, as Steve Horn chronicled last year in reviewing the resource-acquisition rationale for American moves in the region. Viral video or no viral video, going after Kony is a goodwill opportunity for the U.S. government to boost our image and influence in Central Africa. That is our “interest” there, since the LRA poses no direct threat to the U.S.

Because AFRICOM exists to extend U.S. interests in Central Africa, we are going to intervene in the region, regardless of how many people click on the YouTube hit. A policy that was based on a little less SWAT team action and more on parole officer work from the international community could, in theory, benefit Sudan and the Central African Republic – and perhaps help in ongoing conflicts in the DRC (conflicts that the Ugandan army’s mercenary opportunism exacerbated).

In any case, the region's conflicts won’t end with Joseph Kony dead or in the dock.  As Patrick Wegner, at Justice in Conflict, notes:

Joseph Kony and the LRA exist because the marginalisation of the people of northern Uganda sparked a number of rebellions in the late 1980s, among them the LRA. They could not be defeated for two decades because the Government of Uganda continued to marginalise and displace the population in the north instead of protecting civilians in order to gain their trust and support in the fight against the LRA. Kony is able to wage his brutal campaign until this very day because large patches of south-western CAR, north-eastern DRC and Southern Sudan are ungoverned, do not have any infrastructure, and can only be described as one big security vacuum. Once Kony is removed from the battlefield, armed bandits or other rebel groups will sooner or later his place and the slaughtering in this part of the world will just go on as long as the real problems are not tackled.

Certainly, we cannot intend or expect to kill every single LRA fighter and camp follower – including women held as sex slaves – in this campaign. Provisions have to be made to reintegrate these people back into the societies they’ve been taken from – which means making a commitment to ongoing reconstruction efforts in northern Uganda because of all the internally displaced persons still eking out a living there.

Former LRA member Viktor Ochen – whose brother and cousin were also forced into the LRA member – even says that “restoration of communities devastated by Kony is a greater priority than catching or even killing him.” He further asks, “Why spend millions on Kony alone, yet thousands of survivors are dying of repairable physical and psychosocial pain?” – a critique aimed at Invisible Children’s limited direct financing of reconstruction projects in Central Africa.

A society of victims is no recovered society, Ochen’s reporting on rehabilitation implies. Rather, it is a society of survivors that is truly on the way to recovery, and often times foreign assistance fails to recognize this. Reintegration through traditional “Western” instruments – the International Criminal Court, for instance – aimed at conflict resolution have drawn criticism.

[I]n 2000, the Government of Uganda passed an Amnesty Act which guaranteed that any LRA combatants who defected from the LRA would be granted reprieve from prosecution and reintegrated  into society. Justice would be achieved through context-sensitive traditional reconciliation mechanisms rather than through trials. When the ICC began its investigations and subsequently issued arrest warrants for Kony and the other top officials, many civil society, human rights and religious leaders in northern Uganda strongly criticized the decision . . .

The issue of displacement and reconciliation remains a glaring post-conflict challenge, especially considering how many of Kony’s fighters have been traumatized by his brutal “recruitment” and “training” methods (he inducts his “followers” through rape and murder, making them both victim and victimizer).

This does not mean Western NGOs have no place in resolving displacement and reintegration problems, or that the ICC’s actions have scuttled chances for reconciliation in the region. It simply means that it will take more, much more, than killing or capturing Kony and his officers to end the fighting among all parties who’ve committed themselves to the conflict.

“We are defending tomorrow,” Invisible Children noted in a response to criticism of its media campaign, but the emphasis on stopping Kony now by any means necessary belies the many problems that “tomorrow” will bring – not least because for many northern Ugandans, a hard and bitter "tomorrow" has been the reality of their lives for years now.

So, unfortunately, further U.S. intervention -- justified by the popularity of the video -- is likely to be the opposite of what is needed: a whole lot of SWAT action with little emphasis on refugee resettlement or taking measures to combat endemic corruption and poverty that undermine reconstruction work.  As a 2011 International Crisis Group report notes, “The Ugandan army, even with U.S. advisers, is a flawed and uncertain instrument for defeating the LRA."  Yet more military advisors, funds and equipment will probably be forthcoming, as Jack McDonald at Kings of War hypothesizes. AFRICOM is AFRICOM, after all, not Oxfam – though Oxfam  and Ugandan NGOs are in fact accomplishing reconstruction and reintegration work that have helped make “victory” over the LRA in northern Uganda a more lasting peace.

But the Ugandan government has undermined this work by neglecting the region in which it once waged a heavy-handed “counterinsurgency” campaign. The children highlighted in #K0NY2012 are very often “invisible” to us overseas, but they are not invisible to the towns and schools they’ve been taken or displaced from. With this said, these child soldiers and homeless refugees are in fact invisible to Kampala’s corrupt, authoritarian government, and that invisibility helped beget Kony’s secessionist movement in the 1980s.

If Kony is captured and brought to trial, what then happens to his followers, from his most heinous officers to their press-ganged sex slaves, will speak much louder than any viral video. They are the international community's “responsibility to protect,” if it wishes to establish that nebulous doctrine as a new norm of interstate relations as penance for Rwanda and Bosnia. And this is the “tomorrow” by which the U.S. shall be judged in Uganda and other affected countries by survivors. The story does not end with Kony.

In short,  “crowd-sourced intervention" may make people feel good while also causing more problems than it solves. The political will to commit to peace-building efforts in the region is simply not present, either in Central African capitals or Washington and Brussels. Nor can the U.S. be assured that every country the LRA moves through will join in the search for the group. There are no such things as silver bullets in military interventions – especially not with the paucity of the present U.S. commitment – and #K0NY2012 seems to suggest that there are.