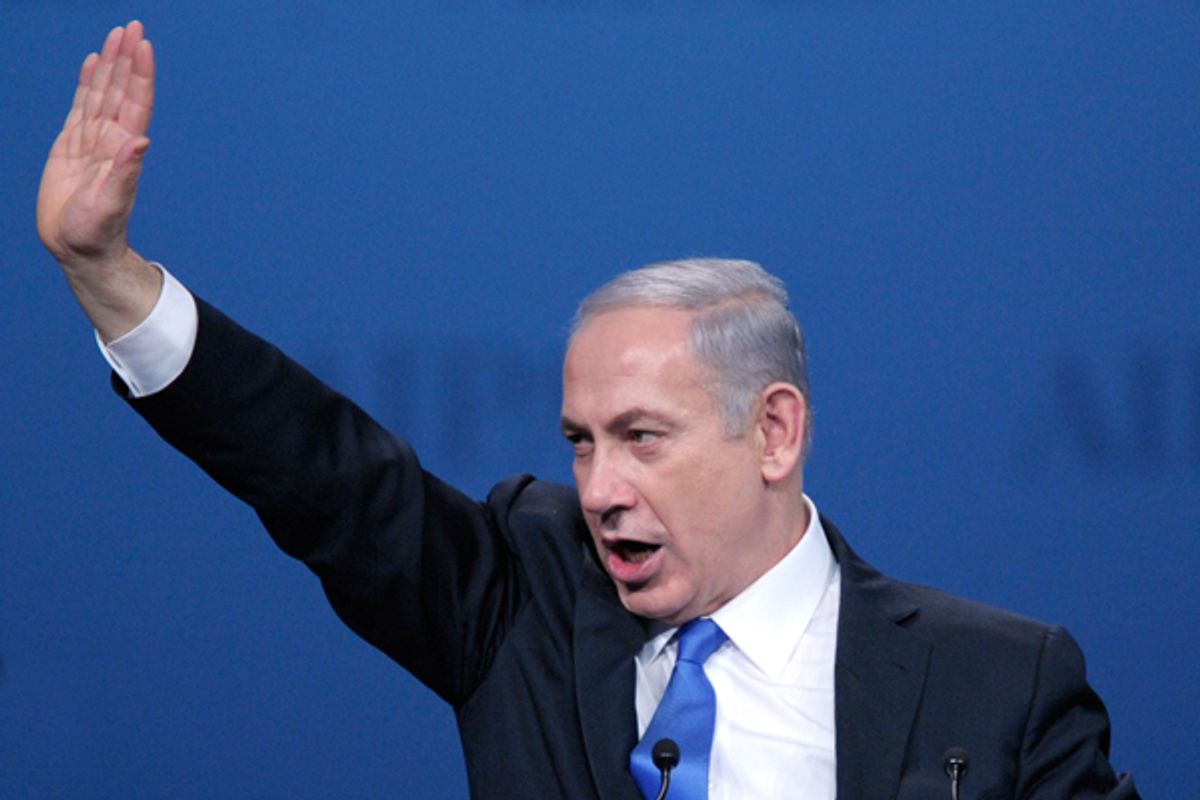 JERUSALEM - Israeli Prime Minister Benjamin Netanyahu has done it again: He’s managed to outrage a Democratic administration in Washington, setting it against him and his Mideast policy. Whether this is going to screw up Netanyahu’s plans to either bomb Iran or let America do it remains to be seen. The feeling here is the same as in the U.S. and elsewhere – that after President Obama insisted that sanctions and diplomacy be given a chance, Israel won’t defy him in the short term, say, before summer. Afterward is anyone’s guess.

But by alienating Obama, mainly with that Holocaust horror show he put on at the AIPAC conference, Netanyahu has probably damaged his ability to go to war against the Islamic republic. The administration doesn’t trust him, doesn’t like him, doesn’t agree with him and doesn’t support him on a war that the president described publicly and pointedly as one that could cost American lives.

Veteran Israeli peace activist and writer Uri Avnery noted: “Not since Eisenhower was president has Israel ever gone to war without explicit, prior American approval.” Pissing off America while preparing for war is terrible statesmanship for an Israeli prime minister; it’s also lousy politics. Israelis, for all their grumbling about Obama, consider U.S. support second only to their country’s own military power as a vital national security asset. Furthermore, poll after poll shows they much prefer America’s air force, not Israel’s lesser one, to try to take out Iran’s nuclear facilities.

Netanyahu came home to charges of fear-mongering from the media and center-left opposition. “Netanyahu and his government have to stop these hysterical analogies with Iran,” said Kadima party leader Tzipi Livni, adding that they were making Israel, not Iran, the focus of the world’s worries. Channel Two political correspondent Rina Matzliach said that while harping on the Holocaust was a sure winner with AIPAC, it “didn’t help the prime minister overseas, and caused a certain discomfort among the public here.”

Netanyahu overplayed his hand in Washington last week, and now, having likened the Iranian threat to the Nazi threat and having vowed before AIPAC, America and the world to stop it, he finds himself more isolated internationally than ever.

Why did he do it? Because as much as American liberals are put off by Netanyahu, he’s got American neoconservatives, evangelicals, Israel lobbyists and other nationalist hawks eating out of his hand. If he’d had two Muslim-bashing Republicans instead of two Democrats in the White House during his tenure as prime minister, by now Netanyahu might be building settlements on the moon.

“My friends, 2012 is not 1944. The American government is different. You heard it in President Obama’s speech yesterday,” he told 13,000 AIPAC delegates, including what he described as “over half of the Congress.” He’d just held up photocopies of two letters the American Jewish Congress had sent to the U.S. War Department in 1944, imploring it to bomb Auschwitz, and then he quoted the War Department’s refusal, stressing the department’s point that bombing Auschwitz “might even provoke more vindictive action by the Germans.” Even on television, there seemed a shocked hush in the convention hall.

The Israeli prime minister goes to the White House to try to get Obama on his side for a war on Iran, and a few hours later he gives a speech to half the world about how Israel can’t trust anybody but itself, and pulls out two extraordinarily embarrassing U.S. letters from 1944 to illustrate.

“Everyone understood that he didn’t bring in two letters from 70 years ago to make the point that they’re irrelevant,” wrote Nahum Barnea, the country’s most prominent journalist, in the Yediot Aharonot daily. “The message went over loud and clear: Iran is Nazi Germany, Bushehr is Auschwitz, Israel is on its way to the Holocaust, and the U.S. administration continues to stand by and watch.”

Amazing.  But was it any more amazing than Netanyahu’s reproachful, televised lecture to a silently suffering Obama in the White House last May, when he sought to foil a move to restart peace talks with the Palestinians, meanwhile misrepresenting the president’s plan to his face?

Bibi's hazing of presidents didn’t begin with Obama; after his first White House meeting with Bill Clinton in 1996, the president was later quoted by his Mideast envoy Aaron David Miller as having said about his visitor from Jerusalem: “Who the fuck does he think he is?" Clinton asked. "Who’s the fucking superpower here?”

In another spat with Clinton during a visit to Washington, the Israeli newspapers bannered the prime minister’s private boast of his ability to use Congress as leverage: “I’ll set this town on fire!”

At the start of another trip to talk with Clinton, Netanyahu made it a point to pay his first respects to Jerry Falwell, who at the time was distributing a video accusing Clinton of selling drugs and being an accomplice to murder. “Benjamin Netanyahu is the Ronald Reagan of Israel!” Falwell told a Washington ballroom crowd of pro-Israel hawks when the prime minister made his entrance.

Netanyahu’s American roots run deep. In the late 1930s, his father, Benzion, was secretary in the U.S. to Vladimir Jabotinsky, the ideologue of maximalist Zionism, then gathering American support for the movement in Palestine. Convincing the United States that it has the same interests and enemies as Israel was Benzion Netanyahu’s approach 75 years ago, and it’s still his son’s approach today. With post-9/11 Republicans and AIPAC-trained Democrats, he can be frank; with more liberal interlocutors, he uses other methods.

Netanyahu tipped his hand in 2001 when, during a condolence visit to a family of West Bank settlers hit by terror attacks, he held forth on how he’d manipulated the Clinton administration, not knowing that the TV camera was on.

“I know what America is. America is a thing you can move very easily, move in the right direction … They won’t get in our way,” he said. While maintaining that “80 percent of Americans support us,” he said Clinton had been “radically pro-Palestinian,” so he had to marshal all his will and cunning to gain what seemed to the Americans an innocuous guarantee regarding the peace talks with the Palestinians. But with that guarantee, he told the family, “I actually put an end to the Oslo Accord.”

He didn’t actually end it, but he certainly slowed it to a virtual halt; the end came later. Now he’s marshaling all his will and cunning to get a Democratic president with views very similar to Clinton’s to either stay out of his way on Iran, or, better yet, do his bidding. This Israeli prime minister still thinks he’s the superpower when talking to the man in the White House, and he evidently figures that that’s going to bring him closer to getting rid of Iran’s nuclear installations.

What can explain Benjamin Netanyahu’s behavior? Only a hubris that knows no bounds.