Is Occupy running out of money? 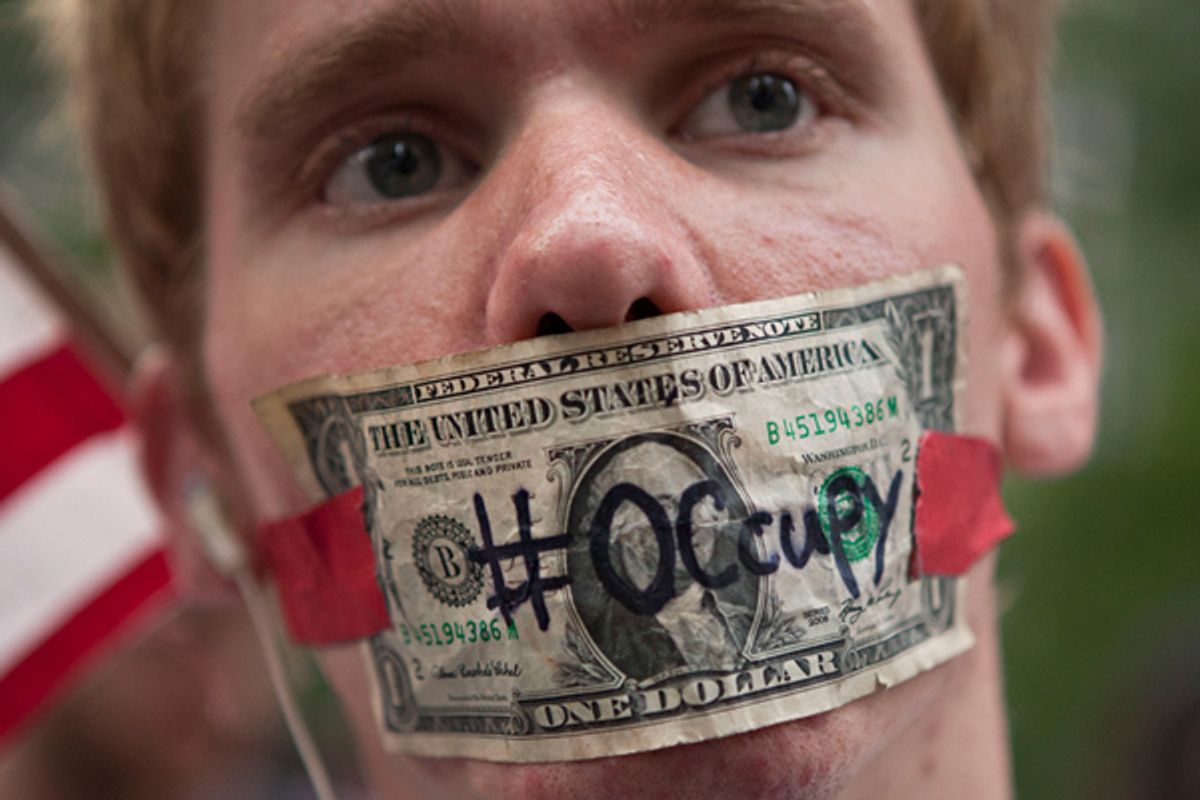 Over the weekend, news emerged of financial woes in the Occupy Wall Street camp (or displaced camp). According to a Reuters report, predictably picked up by the New York Post, "New York's Occupy Wall Street group is warning it could run out of money by the end of the month."

A report posted on the New York General Assembly website by the accounting working group detailed that, apart from $90,000 set aside for bailing out future arrestees, under $45,000 was left in the OWS kitty (an amount that would dwindle to nothing within three weeks at the current rate of expenditure).

Much digital ink has been spilled about the slowing rate of donations flowing into Occupy compared to the boon days last fall, when donations totaling around $20,000 per day were flooding in (as opposed to under $2,000 per week more recently). As the Reuters article puts it, the shrinking funds "[raise] questions about the future of the movement that sparked nationwide protests against economic injustice last year."

But before we strain our ears listening for death knells, I'd suggest that problems with funding needn't necessarily raise (troubling) questions about the future of the movement at all. To be sure, the allocation of limited funds has long been a contentious issue in New York Occupy working groups and elsewhere. Recent challenges have also emerged, as I discussed in previous posts here, about how to deal with wannabe benefactors who don't adhere to Occupy's ethics of horizontalism.

However, the Reuters article highlights the financial situation of just one Occupy group. While the central OWS funds are dwindling, other autonomous projects continue to spring up which do not rely on these funds to operate. Take, for example, Occuprint, a self-described "volunteer-run collaborative project that curates, collects, prints and distributes posters and graphics produced by and for the global Occupy movement." Through a Kickstarter campaign with a goal to raise $16,800 to produce and spread propaganda, Occuprint has raised over $18,000 with two weeks still to go on their pledge drive. Evidently, people are still willing to donate to and support Occupy efforts, even if there is shrinking financial support for the central OWS pot; it is no bad thing if decentralized, autonomous Occupy projects find different ways to fund and support themselves.

Furthermore, as the OWS media team put it in a statement, "This is a struggle which doesn't come gift-wrapped or fit on a spread sheet. The bank account will go up and down - we've done a lot with a lot and also done a lot with a little." The accounting group's report cannot, for example, quantify the work people put in to providing free food, salvaged from supermarket dumpsters -- efforts which will only increase if funds to buy food dry up.

It is worth remembering that Occupy did not rely on substantial funding to get started and to resonate across the country. There is no reason to think that a lot of money is needed to jump-start its momentum again. But now, at least, there's some money tucked away for bail.