His message to the most Romney-resistant Republicans in Dixie: Get in line or Obama wins 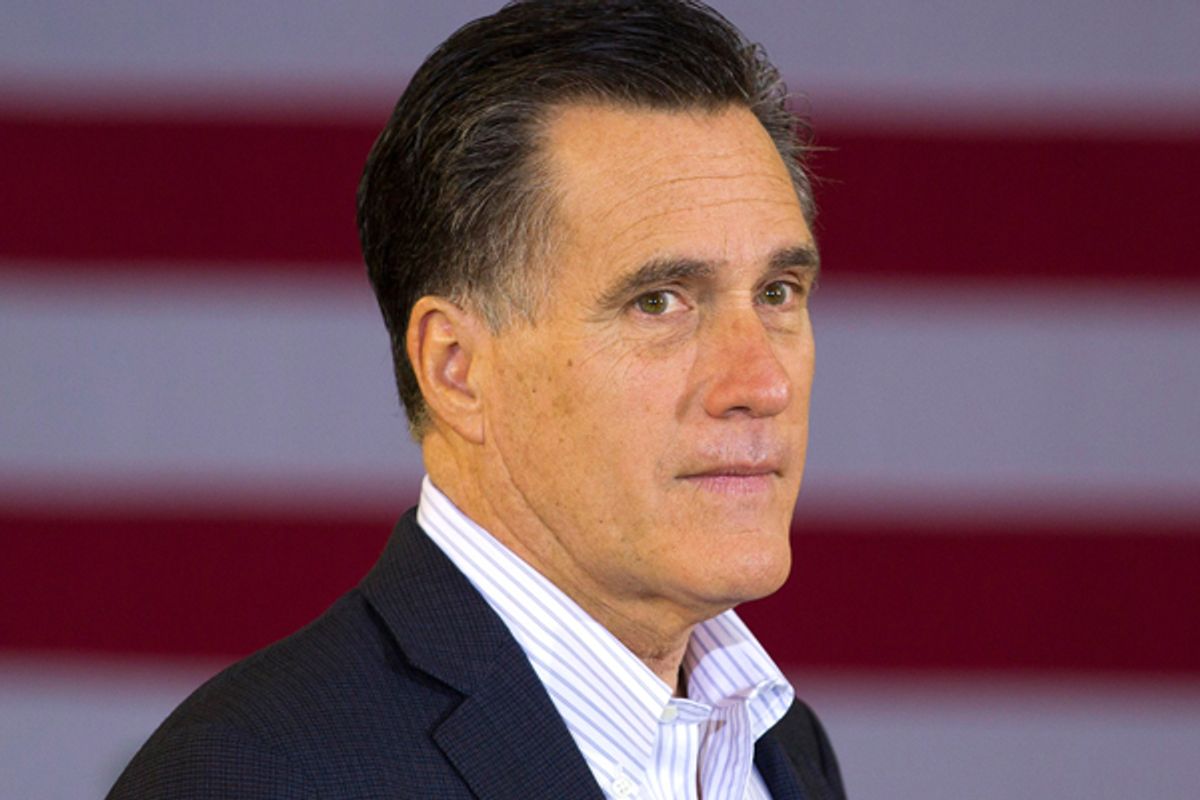 There’s a reason Mitt Romney has been straining so hard and spending so heavily to win over Republicans in Mississippi and Alabama this week: A victory in either state tonight will throw into question the demographic patterns that have fed talk of a deadlocked convention.

To date, as Sean Trende of RealClearPolitics has documented, the results of GOP primaries and caucuses have largely broken along predictable lines, with Romney cleaning up in the Northeast and disproportionately Mormon states of the West, Rick Santorum winning in the Midwest, and Newt Gingrich carrying the heart of the Old Confederacy – South Carolina, Georgia and the Florida panhandle.

Gingrich’s success in the South says as much about him as it does about Romney, whose Northern roots, moderate Massachusetts past and Mormon faith make him a poor fit for a region where GOP politics are defined by the fusion of movement conservatism and evangelical Christianity. Romney failed to win anywhere in the South in 2008, even though he positioned himself back then as the conservative alternative to John McCain, and his struggles have persisted this year.

So his description last week of the Mississippi and Alabama contests as “a bit of an away game” was accurate. In ’08, 77 percent of voters in Alabama’s GOP primary called themselves evangelicals. Romney finished a very distant third in the state, with just 17 percent, behind Mike Huckabee (41 percent) and McCain (37). In Mississippi’s primary (which came after Romney dropped out), 69 percent were evangelicals. Gauging the precise impact of Romney’s Mormonism in states like these is impossible, but even Alabama’s Republican governor, Robert Bentley, admitted in a Monday television interview that his faith is “a very subtle issue that may be a problem in many states, not just in Alabama.”

For Romney, the bright side of these discouraging statistics is that any kind of a win in either state tonight will probably be interpreted as a momentous development. And with Gingrich and Santorum both in contention, Romney has a viable path to victory in both states. Polls from PPP on Monday showed him within two points on Gingrich in Mississippi (33 to 31 percent, with Santorum at 27) all bunched in a three-way tie in Alabama (Romney 31 percent, Gingrich 30, Santorum 29).

But at each of these moments, demographics have quickly overwhelmed momentum, something that was again the case this past week when Romney followed-up Super Tuesday with a 30-point loss to Santorum in Kansas. This has raised the possibility that Romney is simply incapable of running away with the GOP nomination, that he’s condemned to spend the spring suffering a string of embarrassing primary and caucus drubbings even as he slowly marches toward the magic 1,144 delegate number.

On Monday, Romney tried to scare Mississippi and Alabama Republicans into falling in line, warning that the GOP will be weakened by a nomination battle that drags into the summer and to the convention in Tampa. “Can you imagine anything that would be a bigger gift to President Obama?” he asked.

If the ploy works (and if Gingrich and Santorum divide the conservative vote evenly enough), Romney could emerge from tonight with two wins that will he heralded as a major breakthrough – proof that he’s finally winning over the base that is resisting him and that Republican voters are ready to move on to the fall race too. Influential conservatives who have thus far declined to speak out for Romney might then feel ready to do so, significantly boosting his poll numbers everywhere and marginalizing Santorum and Gingrich. That’s what real momentum does, and so far it’s mostly eluded Romney.

Then again, a Romney win tonight might not really get him anywhere if it can be directly attributed to a Gingrich/Santorum split among the GOP base. In that case, the question would be whether media hype that would come with winning either or both states would weaken the right's resistance to Romney in subsequent contests.