Trials of a stay-at-home boyfriend

It's hard being unemployed for six months. Even worse is when your girlfriend picks up the check at dinner 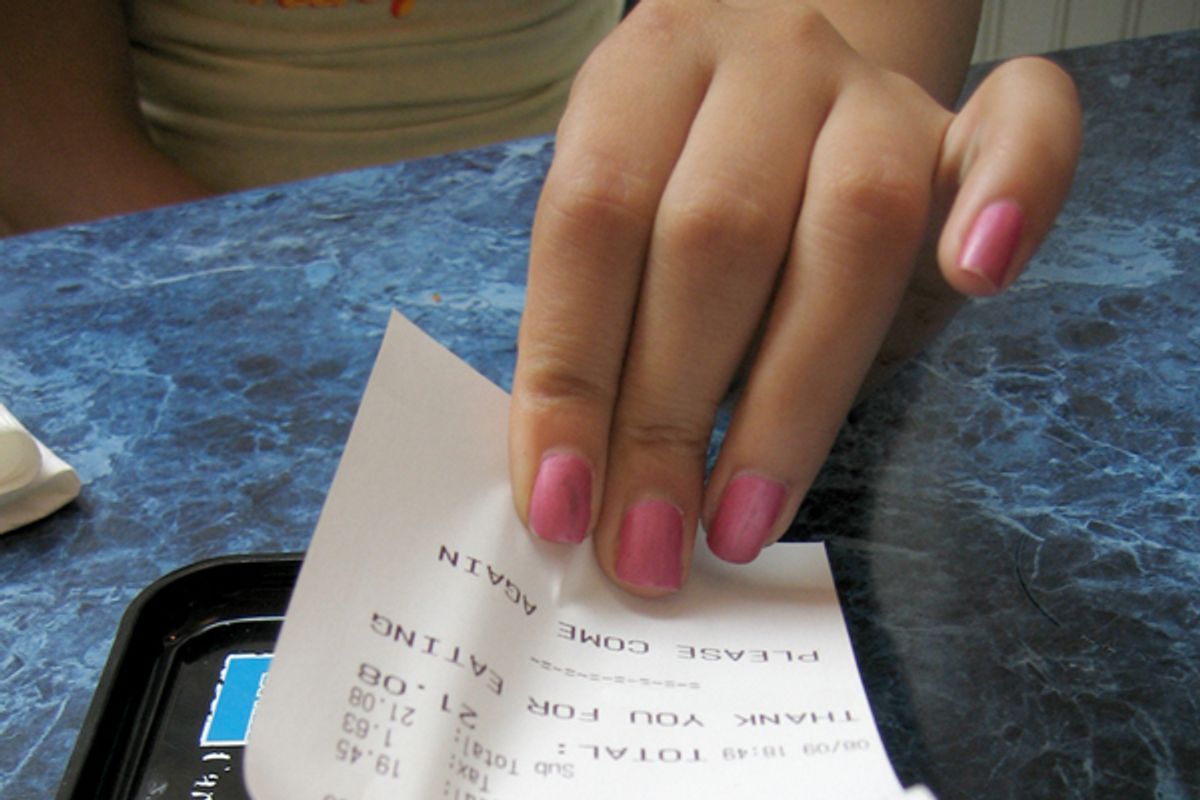 I am a stay-at-home boyfriend. This lifestyle was dictated by circumstances – not choice – but it's hard to deny it has benefits. Showers: optional. Getting dressed: optional. Human contact: optional.

Still, I squirm every time my girlfriend, Stephanie, and I go out to dinner and she reaches for the check. Sometimes I snag it from under her lingering fingertips and whip out my Visa – for which she pays the bill -- as if that's somehow less demeaning. Say what you will about modern times and gender roles in the 21stcentury, but there are still certain behaviors associated with manhood. Providing. Protecting. Being a stay-at-home boyfriend may look easy. But let’s say I’ve forsaken a certain amount of pride.

Last August I earned my master’s degree from Northwestern University. I have now been unemployed for six months. I realize now that life with a liberal arts degree is self-inflicted. It turns out that few job descriptions list a base understanding of semiotics or rote memorization of the oeuvre of Alfred Lord Tennyson under necessary Skills/Qualifications.

It seemed like worthwhile knowledge for those of us naive enough to believe English, history and philosophy were rewarding academic pursuits. What else could allow me to play the sophisticate at parties, wearing tweed jackets, or quoting Nietzsche on nihilism when someone asks if I’ve seen last week’s episode of "The Walking Dead." What I didn’t realize is that first you must earn the money to buy that tweed jacket, which is damn expensive.

Instead I have discovered I am over-qualified, under-qualified, wrongly qualified. At this point I just want a job to resent. Late at night, lying belly-up on the mattress, I long for the discordant beep of a malfunctioning fax machine or a bumbling secretary to diagnose a case of the Mondays.

Day-to-day, the single-most intimidating obstacle I face is not the unemployment rate or another round of hapless job interviews, but attaching an identity to the man I make eye contact with each morning in the vanity mirror. Every tee ball trophy I was given as a child, all those words of blind encouragement in the classroom -- be whatever you want to be -- were just another ingredient in a soufflé of grandiose expectations.  And every day the gap in my job history expands is another day I struggle to find myself.

My girlfriend was more practical than I. She is an engineer, and was offered a job immediately upon graduation. In Cincinnati. So I followed. Every morning she scurries out the door at 7 a.m. to enjoy a concrete career while I watch the "Today" show in my underwear. Stationed in front of my laptop, I refresh my email on 30-second intervals to the soundtrack of Kathie Lee and Hoda sipping syrah and discussing Justin Bieber.

As an unspoken agreement, I keep the dishes washed, the carpets vacuumed, the mantel dusted. Hot meals are attempted on a nightly basis, but my range has yet to exceed pasta and the occasional chicken sandwich. Though not treated as such, I can't help feeling like the lonely house pet, whimpering at the door when she leaves in the morning and standing sentinel at the window when she returns at night. During the day I fetch staples like bread and milk from Kroger, and at night, if I’m good, she’ll take me out to the all-you-can-eat pizza buffet at the local bowling alley.

The hand that feeds, shelters and clothes me is hers, and for that I'm sincerely grateful. Between rent and food, gas and cable, my financial debt to her will soon match my student loans. Which, for frame of reference, can best be described as a ton. Yet she is supremely sympathetic, never begrudging me a cent.

For five years we've been together, and I hope we stay together for the next 60. But a healthy relationship should be symbiotic -- not parasitic. I want to be the anemone to her clownfish, not the barnacle to her boat hull.

I am with her because I love her, but also because if I left now I’d have no choice but to move back into the childhood bedroom in my parents’ basement, with posters of Monty Python and the Simpsons still adorning the pale blue walls. And I would owe Stephanie $10,000. It's the most pure-hearted, indirect, unintentional form of blackmail imaginable.

My peers and I have been donned the Boomerang Generation for the frequency with which we migrate back home to our parents after college. I’ve managed to evade that cliché, and feel especially fortunate that despite my unemployment anxiety, I have only myself to worry about. I can’t imagine the drain of opening rejection letter after rejection letter while your family looks on with bated breath.

Personally, I temper expectations by anticipating the worst, daring each voice mail from a recruiter to surprise me. On average, it takes about 17 seconds to inform a candidate they didn’t get a job. Six months ago Stephanie and I would read through letters together. Now I refuse to even discuss them with her outside of concise text message: HEARD BACK FROM SOUTHLITCH MEDIA – ANOTHER NO.

In January, the national unemployment rate fell to its lowest level since 2009. While experts debate whether or not this is indicative of a sustainable trend, those of us represented by that rate remain unconvinced. There will be no collective epiphany. Each of us within the 8.3 percent will have a personal moment when we realize the economy is turning: when a concrete job offer appears in our inbox.

For now, I find value in the menial. I forge forward by finely slicing each day into a series of self-contained moments, focusing so attentively on a task that it cancels out the noise in my head. For instance, every Thursday morning I clean the bathroom, and for a half-hour my thoughts do not stray beyond the singular objective of making sure that porcelain is immaculate. With a sniper’s precision I assassinate yellow grime beneath the shower head with an old Colgate toothbrush, somehow achieving solace in the vacant beauty of clean white ceramic

Time is divided between home and the coffeehouse down the street, where I am a Norm Peterson-like staple. T.S. Eliot measured his life in coffee spoons; I measure mine in espresso shots. As for our apartment, Dante could’ve used my living room couch as an allegory for purgatory in the "Divine Comedy." It is the command center of my apparent mission impossible, the table before it littered with pink Post-its, empty cereal bowls and crumpled copies of Fast Company. I’m a vigilant housekeeper in every other respect, but to clean this slovenly island would be to somehow admit defeat.

Self-expression is another dump valve. Just as Dark Age healers used bloodletting to expel contaminants from the body, I purge my mind through writing, blogging, reading and drawing in an attempt to tease out some sense of self. I create micro-goals. Today that means reading 30 pages in "Infinite Jest." Yesterday: applying for four jobs. Tomorrow: alphabetically sorting my DVDs ("40-Year-Old Virgin" through "V for Vendetta").

At times I reflect on the chain of decisions that have led to this point. I could have stayed in Chicago or canvassed the country with my résumé. Sought employment in New York or San Francisco with no strings attached, letting ambition and aspiration eclipse my desire to stay with Stephanie.

But then she smiles across the dinner table and takes a bite of undercooked linguine, and I remember why I’m here. Losing her would leave me with a void no company car or 401K could fill. And maybe that decision defines me more than I ever realized. Let it have my pride and my sense of manhood. But love – that’s something no recession can take from me.

Tyler Moss is a freelance writer based out of Cincinnati, Ohio. This is his first article for Salon.