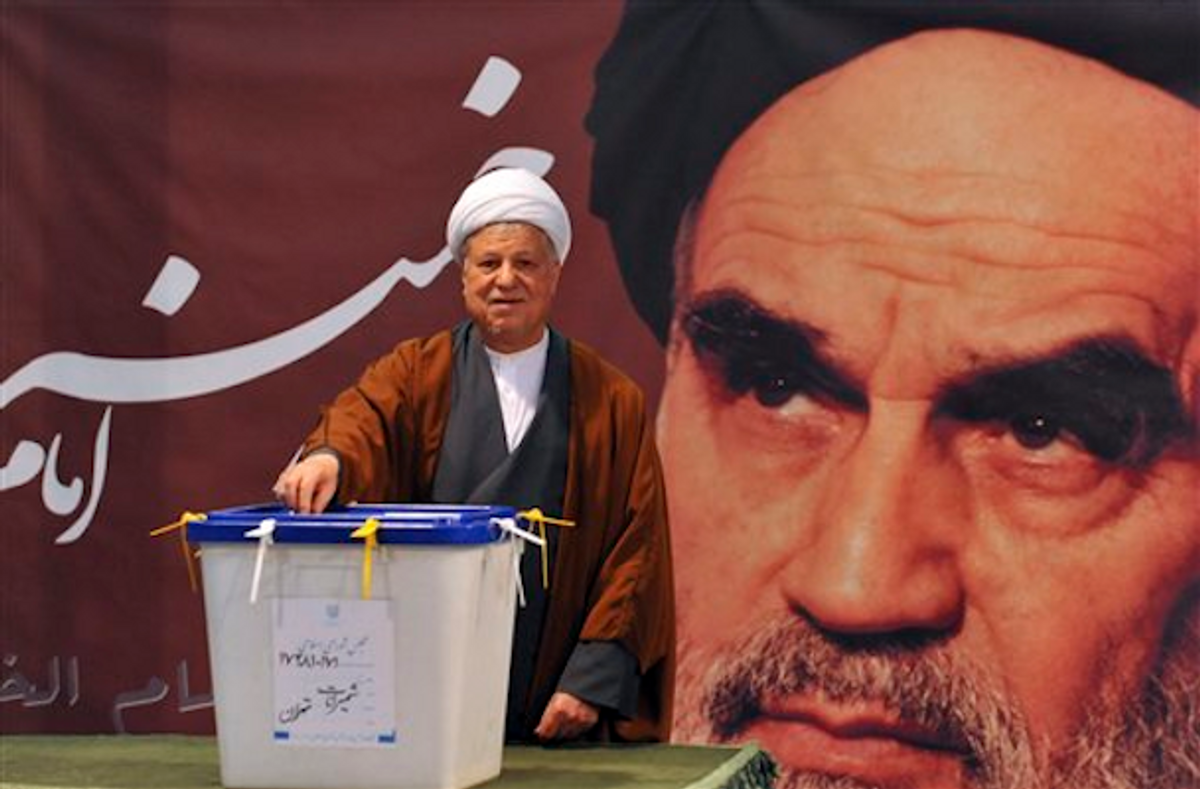 BOSTON — It was no coincidence last week when Iran’s Supreme Religious leader, Ayatollah Ali Khamenei, praised a 64 percent turnout for parliamentary elections at home as well as President Barack Obama’s words that dampened talk of war against Iran. The elections gave him a commanding authority at home and a freer hand to deal with foreign threats.

In a rhetorical style that was less hostile than usual, Ayatollah Khamenei hailed Obama’s comments as “good words” and called them “an exit from delusion.” Meanwhile, his nuclear negotiator, Ali Asghar Soltanieh, resumed talks in Vienna over Iran’s controversial nuclear program with five western powers including China for the first time in more than a year. He called the talks “a new chapter.”

Both seemed to be efforts to divert threats at a time when hawks in Israel are beating the drums of war and calling for a military strike as soon as spring to stop Iran from making a nuclear bomb. Sanctions are crippling Iran’s economy and the value of its currency, the rial, has plunged since fall to half against the U.S. dollar.

It is too early to take Ayatollah Khamenei’s comments as an overture to the West. “I think we have to wait and see if anything will come out of the nuclear talks,” said Mehdi Khalaji, a senior fellow at the Washington Institute for Near East Policy. “So far he just seemed glad that war is not imminent.”

The victory of Ayatollah Khamenei’s supporters in the March 2 elections has, at least symbolically, solidified his authority. According to official figures, his supporters won 75 percent of the seats. The fate of the remaining 65 seats in the 290-member assembly will be decided in run-off elections.

The fact that supporters of President Mahmoud Ahmadinejad won only 2 seats, compared to 70 percent of the seats in 2008, is being interpreted as nothing but a clear victory for Ayatollah Khamenei.

Ayatollah Khamenei, who has the final word on state matters, has made Ahmadinejad a target after he challenged his authority. The president tried to reopen relations with the United States, despite opposition from the supreme leader, believing that rapprochement with the West would be popular with Iranian electorate. He appointed his supporters to key ministries that had been historically controlled by the supreme leader. Ayatollah Khamenei lashed back late last year and publically embarrassed the president by reappointing the Intelligence Minister whom Ahmadinejad had fired.

The elections were not only about sidelining Ahmadinejad, but also restoring the prestige and an image of strength to the supreme leader. In the days before the election, Ayatollah Khamenei was concerned only with turn out. The elections were the first since the 2009 presidential race that triggered massive anti-regime protests. Khamenei had gone to extreme lengths to support Ahmadinejad against pro-reform forces that demanded more political and social openness.

Before the vote this month, Ayatollah Khamenei urged people to vote in large numbers to “smack the face” of the enemies, a reference to Israel and the United States. His supporters equated low turnout with an invitation for a military strike, because a low turnout would project an image of weakness at a time when the country had come under increasing threats.

The opposition movement that drew hundreds of thousands into the streets boycotted the election and urged its supporters to stay away from the polls. Their candidates were banned from running and their leaders have been under house arrest for the past year.

No independent reporting confirmed the 64 percent turnout. The regime boasted that it was an “epic victory,” compared to 57 percent that voted in parliamentary votes in 2008. Foreign reporters were not allowed to roam freely and were bused to specific polling stations where they were greeted with enthusiastic voters.

Apathy among the large middle-class generated almost no citizen journalism except for calls from Iran to a call-in program on BBC Persian Service that was beamed into Iran on satellite. Callers said the polling places in Tehran and large cities were deserted.

The contrasting numbers that the government released in the early hours of the count failed to convince people it was different from the 2009 election that was widely viewed as fraudulent. One government official put the turnout at 34 percent while the Interior Minister, Mostafa Najar, said it was 64 percent. Eventually, the Interior Ministry, which was counting the votes, deleted the turnout figure all together from its website. The semi-official news agency, Mehr, even reported the total number of votes as being higher than the number of eligible voters in a small city of Ilam.

Although there were no immediate claims of irregularities, it was Ahmadinejad’s younger sister, Parvin Ahmadinejad, who vowed this time that she would make formal complaints of fraud in her hometown of Garmsar where she lost to a rival candidate.

As for Ahmadinejad, he will become the first president next week in the Islamic regime to be summoned before parliament to answer MP’s questions over alleged mismanagement. The move has been seen as an effort to curb his power. In another blow, the Guardian Council, a watchdog body close to Ayatollah Khamenei, blocked the president from setting up a committee responsible for supervising the implementation of the constitution. The committee would have given Ahmadinejad more leverage to ensure that, as president, he was given all the power the constitution granted him.

Nazila Fathi reported out of Iran for nearly two decades, most recently for The New York Times. In 2009, following the elections, she was forced to leave the country because of government threats against her. She was a Nieman Fellow at Harvard in 2010 and is currently a fellow at the Shorenstein Center on Press, Politics and Public Policy at the Harvard Kennedy School.