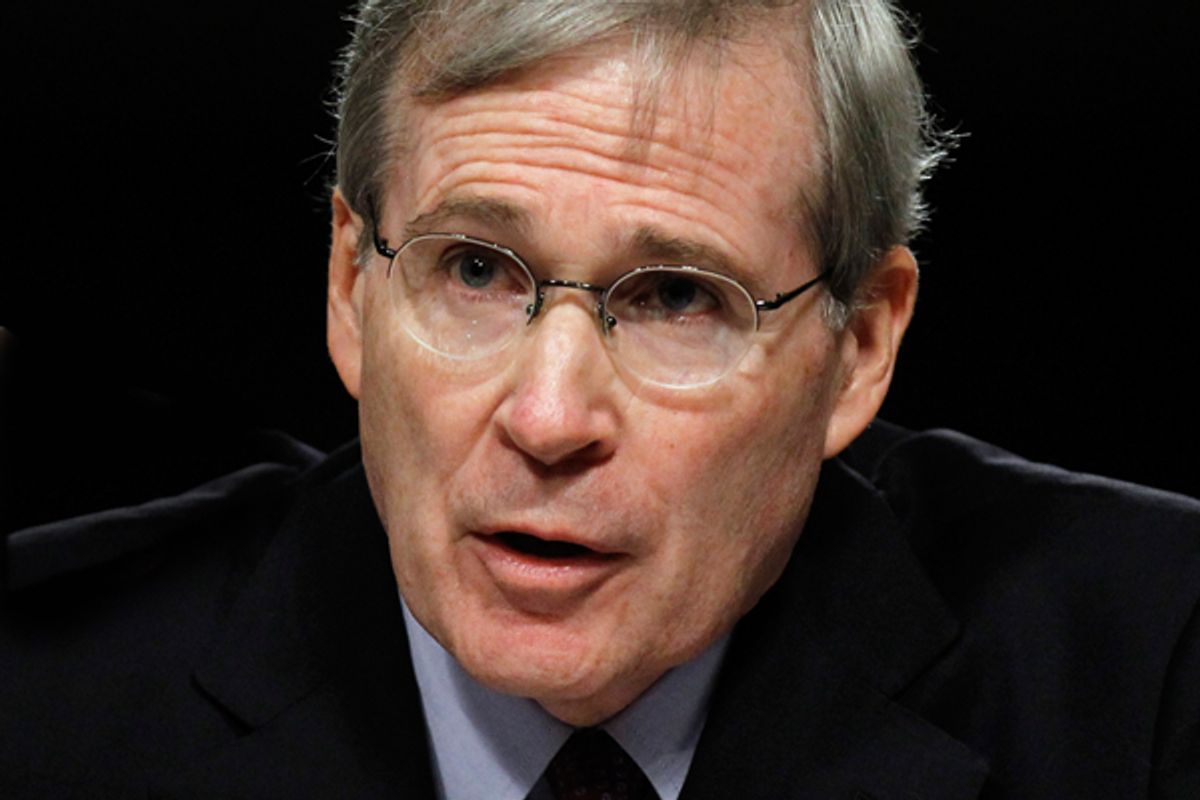 Another voice against war in Iran is heard and from perhaps an unexpected source. Former Bush administration National Security Advisor Stephen J. Hadley warned against an attack on the Islamic Republic yesterday. “If something needs to be done, it is not military action,” said Hadley. “There’s a wide spectrum between sheer diplomacy and military action."

Hadley was an early and enthusiastic functionary in the war against Iraq. During the George H. W. Bush administration, he was a Pentagon aide to uber-hawk Paul Wolfowitz, and later served as a senior foreign policy advisor to George W. Bush’s presidential campaign. Hadley was instrumental in allowing the "Yellowcake Forgery" fabrication into Bush’s 2003 State of the Union address, a mistake for which he reportedly offered to resign. Taking over as national security advisor in 2005 from Condoleezza Rice, he was known for being on the relatively moderate spectrum of the Bush administration (well, at least when compared to Cheney and Rumsfeld). Upon leaving office, he formed a consulting shop with Rice, and he recently co-wrote a piece calling for negotiations with the Taliban.

Hadley was speaking at a panel at the University of Maryland, alongside former Carter administration National Security Advisor Zbigniew Brzezinski. Brzezinski went further, saying that even if Iran did obtain nuclear weapons, it could be contained. According to Brzezinski, who was the top policymaker during the time of the Iran revolution and hostage crisis in 1979 and 1980, a nuclear Iran is something the world can live with. “Deterrence needs to be given a chance to work,” he said. “The Iranians are devious, but they are not suicidal.”

The panel was moderated by Shibley Telhami, a veteran pollster and scholar on the Middle East. Telhami released a poll finding that only one in four Americans favor Israel conducting a military strike against Iran’s nuclear program. Close to 70 percent favor the U.S. and other major powers continuing to pursue negotiations with Iran, a position that is supported by majorities of Republicans (58 percent), Democrats (79 percent) and Independents (67 percent). The poll, conducted by the Program on International Policy Attitudes, found only 14 percent of respondents said the U.S. should encourage Israel to strike Iran’s program. Steven Kull, director of PIPA, said, “One of the reasons Americans are so cool toward the idea of Israel attacking Iran’s nuclear program is that most believe that it is not likely to produce much benefit.”

Brzezinski agreed heartily. “We have no idea how such a war would end,” he said. “Iran has military capabilities, it could retaliate by destabilizing Iraq.”

Hadley was much more worried about the consequences of a nuclear Iran. “Iran is different than North Korea, which is more inward-directed,” he said. “I worry that they would be more ambitious in support of terrorism and that other countries” in the region would also want nuclear weapons. Still, Hadley believes that the Obama administration has been pursuing the right approach with Iran, focusing on sanctions instead of opting for military action. Even if covert action or taking other approaches to delaying Iran’s nuclear weapons program only worked for two or three years, that would be worth it, he said.

“The Iranian public is watching what is going on in Egypt, Tunisia and Libya,” he said. Delaying a military strike may offer a chance for something to change in Iran, either through diplomacy or through the leadership’s reconsideration of its foreign-affairs approach. He believes Iran’s recent agreement to nuclear talks came as a result of increasing pressure on the regime.

Brzezinski is worried about a situation whereby Iran is forced to choose between a humiliating retreat and crippling sanctions. Such an ultimatum offers no chance for the regime to take a face-saving retreat, similar to how the Soviet Union was granted concessions in return for removing its missiles from Cuba during the 1962 Cuban Missile Crisis. “The Israelis have been predicting since 1994 every year that Iran will have nuclear weapons the next year,” he said. While the United States has a rightful moral obligation toward Israel, Brzezinski said, offering it protection under America’s nuclear umbrella and resolving the Israeli-Palestinian conflict are the best way to integrate it permanently into the international community.

In contrast to some top Republicans, Hadley said that America should engage with Islamist and Muslim political parties that have gained power in Egypt and elsewhere. “Just because they have the word ‘Islamic’ or ‘Muslim’ in the name — we should be pushing them to pursue pluralism,” he said.

Hadley’s comments are a marker of how top Bush administration official have been chastened by the Iraq disaster. With the important exception of Cheney and Rumsfeld, all seem to admit that the war did not go as planned -- to the extent that it was planned). One of the few good things to come out of the Iraq war is that it has cautioned American leaders against starting another.