Speculators who lost $1.6 billion for their customers get big bonuses. So what else is new? 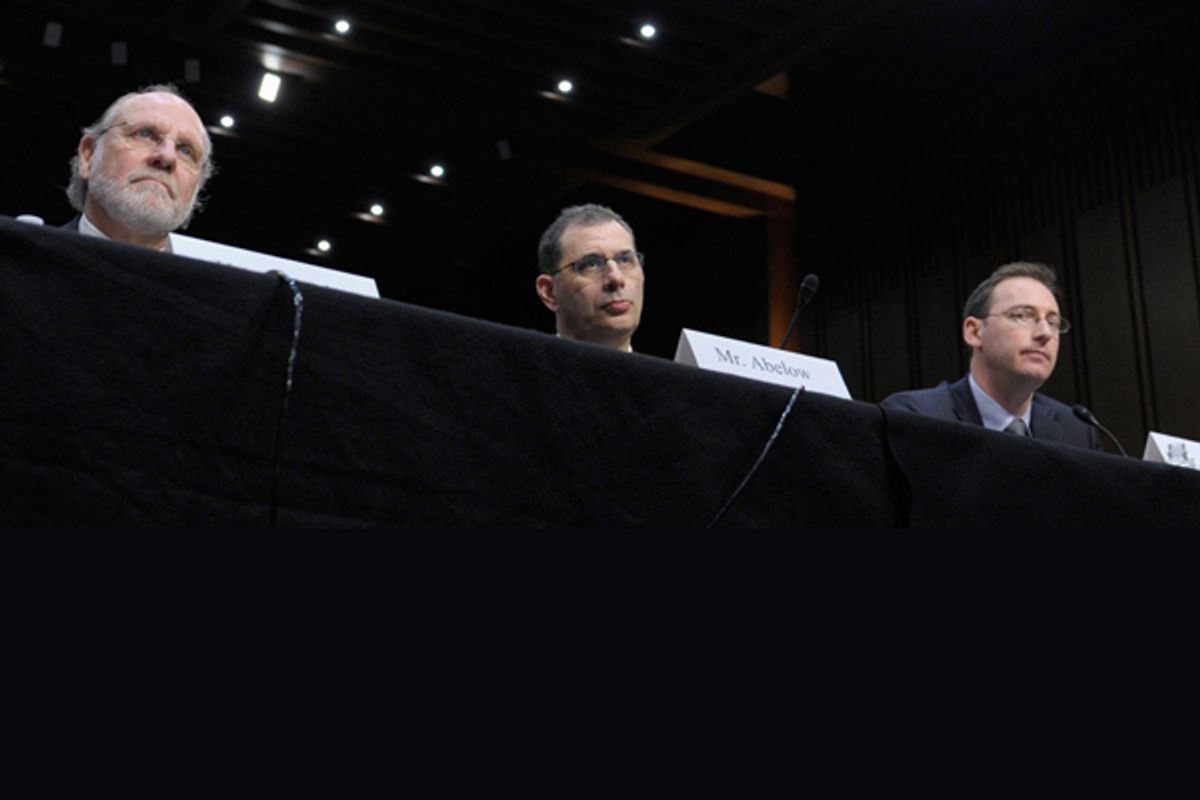 When word of the obscene bonuses being doled out to top executives of Jon Corzine’s failed MF Global went public the other day, I expected white-hot fury. A major brokerage had gone belly-up, $1.6 billion had simply “vanished,” and the people responsible for the mess are about to be enriched. But except for isolated pockets of outrage like congressional fist-shaking and a Minnesota farmer protest — victims demanding that the money go to them and not to the fat cats who ran the company into the ground — reaction has been subdued.

Call it Wall Street greed fatigue. You say there is a group of devious men (and they are usually men) who lost or stole the money from a large group of trusting and trustworthy people and then enriched themselves for their atrocious behavior? And we're supposed to be surprised? As a news story, the MF Global bonuses is familiar. The headline "Vultures Flourish in the Great Recession" reeks of 2009. Besides, what can you do about it?  Not a single executive responsible for the crash of 2008 has gone to jail or even visibly suffered. After a while the story gets tiresome.

Whatever the cause of Greed Fatigue, its  prevalence today is a shame because MF Global, headed by former New Jersey Sen. Corzine, may well have engaged in criminal conduct. The rewarding of their irresponsible behavior with bonuses ought to get free-market types and Republicans fired up alongside the usual progressive Wall Street-bashers. Perhaps the fact that Corzine is a liberal Democrat may encourage right-wingers to overcome their Greed Fatigue. We can only hope. The MF Global fiasco is not only the best example I can find of how the culture of greed has survived in the aftermath of the 2008 financial crisis. It’s also an example of crony capitalism at its most pernicious.

To understand the MF Global story, you’ve got to explore a bit why the firm went belly-up last October, and why we even know in advance that these bonuses are going to be paid. Unless they are publicly traded companies, Wall Street trading firms don’t disclose to a soul how much they pay their top people, and only do so after the fact.

MF Global used to be known as Man Financial, and it had a reasonably good reputation. It did a humdrum business placing commodities trades for fund managers, as well as farmers, grain dealers and others whose livelihoods depend on the vagaries of commodity prices. To protect themselves, many of them hedge by trading in derivatives. That’s the “Dr. Jekyl” side of the commodities and derivatives business, a conventional business that performs a useful function for corporations engaged in real commerce. The “Mr. Hyde” side of the business — the adventurous speculation for personal profit -- was represented by the trading that MF Global and the Wall Street banks do for themselves. When speculators start imagining huge profits, caution has a way of being thrown out the window, as happened in the run-up to the 2008 financial crisis. It happened again to MF Global — in spades.

In the case of MF Global, the problem was simple competence. The firm  traded complex financial instruments called “repurchase agreements.” Despite the presence of CEO Corzine, who made a fortune at Goldman Sachs before going into politics, the firm somehow “misplaced” over $1.2 billion from 36,000 customer accounts. To make matters worse, MF Global actually dipped into the customer funds that remained — to the tune of $700 million — to make up for the shortfall. That’s like a lawyer stealing client funds.

The usual congressional inquisition followed.  It was more of a circus than usual, because top MF Global officials said they didn’t know where all that $1.2 billion went. (The number was later put at $1.6 billion, a huge chunk of the $6.9 billion in customer cash.) MF Global execs were called before a congressional committee in December: Corzine, president and chief operating officer Bradley Abelow and chief financial officer Henri Steenkamp. They got the usual tongue-lashing. Addressing Steenkamp,  Sen. Mike Johannes, a Nebraska Republican, fumed, "You're dancing around with me." The other two were similarly chastised, and rightly so.

What seems to have happened is simple: The traders at MF Global screwed up, and stole money from customers to make up for the losses. It’s hard to think of any other possible explanation.

MF Global wound up in bankruptcy court.  That is how we know that bonuses may actually be paid to the same people who were roasted in Congress. Former FBI director Louis Freeh, the bankruptcy trustee, indicated that he was planning to pay bonuses to Abelow, Steenkamp and Laurie R. Ferber, general counsel. The amount of the bonuses has not been determined yet, but the Wall Street Journal reported that the three execs, and 20 other MF Global employees, will get bonuses “if they hit specified targets such as increasing the value of MF Global's estate for creditors.”

What makes this outrageous is not just the obvious horror, which is that money is going to two executives, Abelow and Steenkamp, who were not only in charge at the time of the mess, but stonewalled Congress about the money, and presumably have some explaining to do in both the criminal and numerous civil inquiries being conducted into the MF Global collapse. Also shocking is that this charade is being played out in bankruptcy court, which has a broad mandate to prevent anyone involved in a bankruptcy from being unjustly enriched. Freeh, as the former federal judge that he is, surely should have known that paying out bonuses to the top execs of the company reeks to high heaven, and has the odor of crony capitalism at its worst.

It’s not an “excess compensation” issue. It’s not left versus right or Wall Street bashing at work here. It’s the way bankruptcy courts are supposed to work. That’s why, for instance, the trustee in the Robert Madoff liquidation, Irving Picard, has caused such a ruckus with his “clawback” suits against investors who cashed out of the Madoff funds. The aim is to treat all victims fairly.

But here, in the MF Global mess, you have top officials of a company that “misplaced” customer money getting paid to help clean up the mess that they created. Their reward, at the most, should be leniency from regulatory or law enforcement sanctions — not bonuses. But that apparently hasn’t dawned on the MF Global trustee.

It’s not clear that the MF Global perps will ever be prosecuted. A criminal inquiry is underway by the Justice Department, although that seems to be headed nowhere — perhaps because of fear that prosecuting Corzine will hurt Obama, as Joe Nocera suggests.  I suspect that the same kind of double standard is also at work in this bonus fiasco, in which Corzine’s cronies (though not Corzine himself) stand to benefit.

Another way of looking at this is that the bonus culture is so ingrained on Wall Street that nothing, I mean absolutely nothing, will keep these dudes from getting their bonuses. Not failure, not stonewalling Congress. Nothing. Not even when they are in bankruptcy, when the sword of Damocles is supposedly hanging over their heads. Not even with the feds conducting a criminal investigation. Doesn’t matter. They get their bonuses. And the rest of us get Greed Fatigue.

It’s possible that the outcry, muted as it has been, will be sufficient that the bankruptcy judge will nix the bonuses, or allow them to be paid only to employees who had no role in the collapse of the firm. I wonder if it might be better to pay the bonuses to all of them. Then they can be a kind of living monument to the mind-set that got us into the mess that is continuing to burden the economy.