The middle class stood by Assad because he delivered stability and prosperity. Then the uprisings began 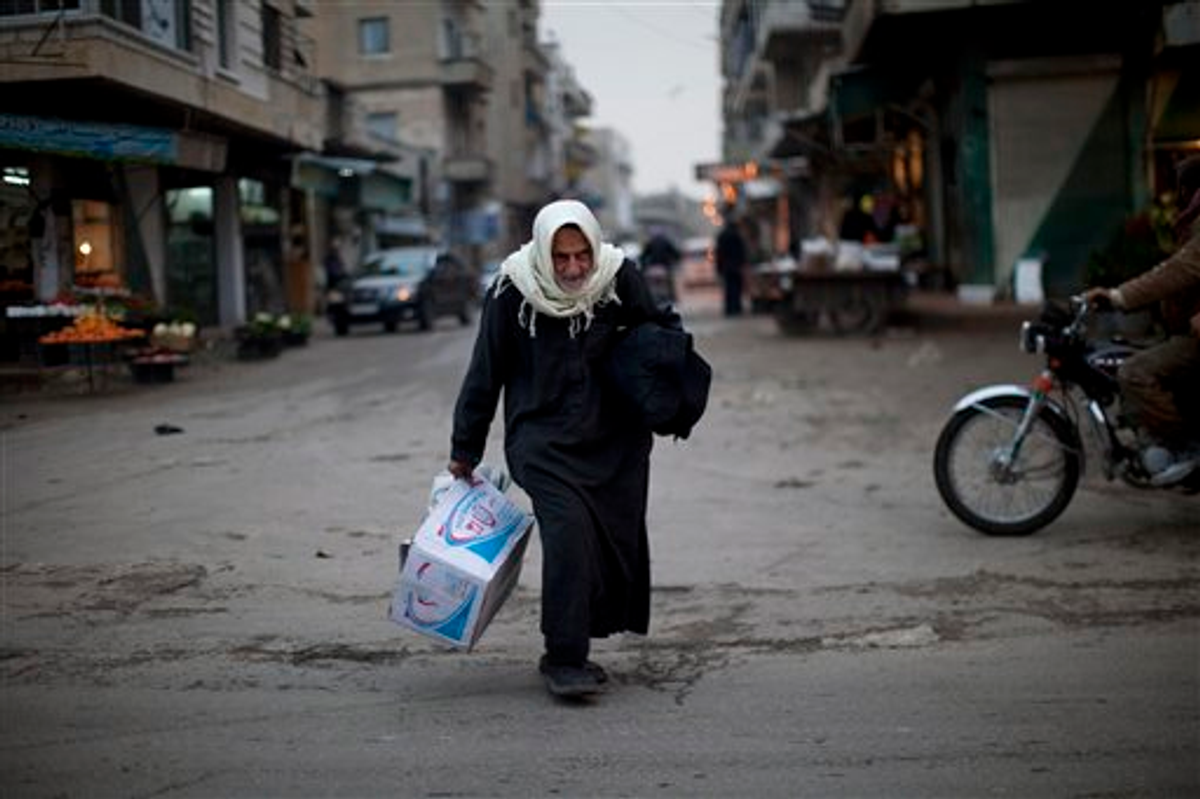 This article originally appeared on GlobalPost. It was written and reported by a GlobalPost correspondent in Damascus, whose name has been withheld for security reasons.

DAMASCUS, Syria — After a 20 percent pay raise took his monthly salary to about $500 at a state-run company here, Abu Bassam was doing better than your average Syrian employee.

Then began the uprising against President Bashar al-Assad.

Now, state oil revenues have been slashed under crippling international sanctions. Tourism is nonexistent, and confidence in the economy is at an all-time low. As a result, the Syrian pound (SYP) has lost a full 50 percent of its value, falling to the psychologically hard-to-stomach yardstick of SYP100 to $1, compared with SYP48 when the crisis began.

“So now my salary is actually $250: In a year, I lost half my monthly salary while prices of commodities doubled,” said the 50-year-old, a father with four children in school and a three-room home in the struggling Damascus suburb of Hajar al-Aswad.

On his way into work, he said, the usually tight-lipped passengers on the minibus now all chat away about money and prices. And when he returns home ready to enjoy the traditional, leisurely mid-afternoon lunch, Abu Bassam now often finds his wife driven to distraction by pressures on the family purse.

“Usually my salary covers all our food and bills for the month. But this month my wife told me the money had run out after just nine days,” he said. “I don’t know what to do. She went to buy some commodities and came back from the shop very upset because the price of sugar is now 110 Syrian pound, whereas it was 75 just a few days ago.”

Staples like rice and eggs have tripled in price over the year, while cooking oil has doubled, according to residents of the capital. Bakeries, subsidized by the state, have held their price of SYP15 for eight pieces of traditional flat bread.

But with electricity blackouts 12 hours a day hitting even middle-class neighborhoods not involved in protests, the bread makers have struggled to meet demand, leading to long lines. Those who can afford it now buy bread from the black market, where it costs 50 Syrian pounds a pack.

Shortages of diesel and heating oil have also hampered bakeries, as well as transport. That has left families cold through the winter months, spawning a flourishing black market with traders buying precious supplies, often through contacts in the regime, for the subsidized price of 15 Syrian pounds per liter and selling it for 35 Syrian pounds.

For the first time in a generation, residents of Damascus have seen massive lines of cars, jostling two by two at petrol stations as the once rock steady government-backed prices begin to unravel, climbing from SYP40 for a liter of gas to SYP50 recently, and up to SYP150 on the black market.

The arrival of a delivery tanker at government-run gas stations has begun triggering chaotic scenes among drivers desperate to fill up, darkening the mood among the capital’s already stressed taxi drivers, who have hiked their prices well beyond the meter.

Last month, Faisal al-Qudsi, the son of a former Syrian president who was involved in the country's economic liberalization, told the BBC that the economy was being crippled by foreign sanctions, particularly on the oil sector, and that the Central Bank’s reserves had fallen from $22 billion at the beginning of the crisis to about $10 billion.

Qudsi said Iran was sending “quite a lot of cash” to support Syria through Iraq, but it was not enough, adding that most of the top businessmen he knew had left because of fears for their safety.

The government initially spent $2 billion defending the local currency, but Mohamad Nidal al-Shaar, the country’s economic minister, said in January that the government’s priority would be protecting its foreign currency reserves.

Economists said the crashing value of the Syrian pound reflected a widening gap between supply and demand of hard currency dollars, suggesting the state has indeed rolled back its previous support for the national currency.

In the marketplace, the Syrian pound is losing value so fast that traders in Damascus said they were struggling to price goods one day to the next.

“I didn’t know what to do last Thursday,” said Muhanad, a 45-year-old businessman with a small electronic goods store. “I had to tell my staff not to sell anything more because I could not decide the price. One day a computer monitor is worth 38,000 Syrian pounds, but the next day it’s worth 50,000.”

But if the value of his stock is temporarily on the rise, the long-term business prospects look bleak for traders like Muhanad, a member of the Sunni middle class, whose support for a regime led by an Allawite minority has been vital over the decades.

With tight controls on hard currency savings and transfers, small businesses like Muhanad’s must pay for imported goods in euros or dollars bought with Syrian pounds. The Central Bank’s official rate may remain unchanged at just over SYP59 to the dollar, but businessmen like Muhanad know the real worth of their companies and savings are in rapid decline.

“The business class supported President Assad for maintaining the country’s economic, political and social stability,” Muhanad said. “But if these are gone, why should we support a president who wants taxes but offers nothing in return, not even protecting the national currency?”