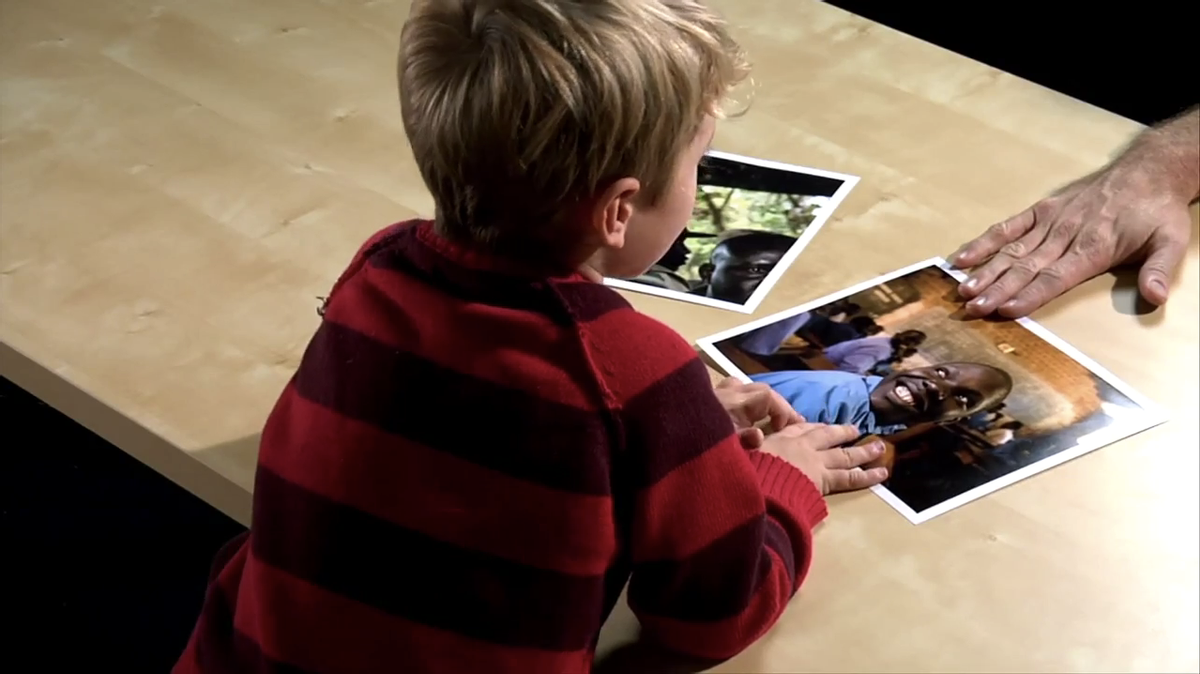 U.S.-based non-profit Invisible Children responded directly on Monday to criticism over its widely popular Kony 2012 campaign, a viral video that has drawn tens of millions of viewers and major celebrity endorsements. However, despite the group’s best efforts, the campaign is still taking heat over its portrayal of Africans as victims whose only hope lay in the actions — and wallets — of white saviors. And critics say it’s that centuries-old narrative that’s in part responsible for the campaign’s viral success.

In a video that clocks in at just over eight minutes, Invisible Children’s CEO Ben Keesey attempted to reinforce his organization’s commitment to ending political unrest in Uganda.

“I understand why people are wondering is this is just some slick, kind of fly-by-night slacktivist thing,” Keesey says in the video, “when actually it’s not at all…. It’s connected to a really deep, thoughtful, very intentional and strategic campaign.”

Kony 2012 launched on March 5 as an experiment with a seemingly simple goal: to make Joseph Kony, leader of Ugandan rebel group the Lord Resistance Army (LRA), famous. Kony, who’s widely considered an international war criminal responsible for hundreds of thousands of murders, kidnappings and rapes, has been active at least since 1986 but has gone largely unnoticed by the U.S. public. Invisible Children’s Kony 2012 campaign aimed to change that with the launch of its ambitious multimedia push.

And, to that end, it’s worked. The Kony 2012 campaign has pushed what’s literally become one of the most successful viral video in history — to date, it’s had 75 million viewers and counting. Representatives from YouTube wrote that the clip has seen “unprecedented popularity” for a non-profit video; two days after its release, the video had 31 million views in a single day, and 20,000 “Kony” related videos have been uploaded to the site in the past week.

But the campaign’s visibility is forcing to the surface some uneasy questions about race, political organizing and the Internet. Namely: Must nuanced political issues be narrowed down to their simplest forms in order for the public to digest them? Can that issue work without perpetuating deeply problematic caricatures about race? And what, in the long run, does it mean to “win”?

It’s impossible to write a blueprint for what makes anything go viral, but the Kony 2012 does share some important traits with its viral predecessors: It told a simple story in a compelling way and got a lot of famous people to tell it, too.

“It’s a very specific example of connecting a really big metanarrative of technology and change and generational potential with a very high-impact, emotional, personalized story,” says Patrick Reinsborough, executive director of SmartMeme, a group that follows viral stories on the Internet. “It provides a sense of collective agency for folks.”

The campaign itself is centered around a 30 minute video by filmmaker and Invisible Children co-founder Jason Russell. In it, Russell attempts to explain to his 5-year-old son that Joseph Kony is an evil man who kidnaps children and turns them into ruthless soldiers who kill their parents. In using this technique to explain the situation to his son, Russell is also informing the viewer. It’s one of our culture’s most common storytelling narratives: there’s an evil man who does terrible things to innocent people—often children—and he must be stopped.

From there, Invisible Children asks its viewers to get involved. They can make a tax deductible donation of at least $10, purchase the group’s $10 Kony bracelet, or buy a $30 action kit that includes the bracelet, a t-shirt, stickers, buttons and an action guide.

In addition to donating, Invisible Children encourages supporters to “hit the streets” and spread the word about Joseph Kony’s evil and engage lawmakers who have the power to influence U.S. foreign policy. Celebrities like Oprah, Rihanna and Ryan Gosling have helped spread the word.

Activists in the U.S., even those who disagree with the narrative put forth by the group, think there’s much to learn from their strategy, which has rested mostly on engaging high school students between media projects.

“One of the most powerful and compelling things about their model is that they don’t just do stuff online,” says Sasha Costanza-Chock, assistant professor of civic media at M.I.T.

Constanza-Chock thinks that Kony 2012 is a good example of “transmedia activism”, which he defines as storytelling across multiple platforms and making concrete calls for people to get involved. “The video is only the most recent, most visible, most highly produced current outgrowth of a multi-year strategy that that organization has pursued.”

One of the most glaring omissions from the video is that it’s missing the perspectives of Africans as anything but victims.

“It’s propaganda for a western viewer,” says Tavia N’yong’o, assistant professor of performance studies at New York University. “Any African watching it feels very strongly like we’re not in the picture—there’s no African complexity, and there’s certainly no African agency.”

Within days, Ugandan journalist Rosebell Kagumire rose to the top of a chorus of African voices criticizing the campaign.

“It simplifies the story of millions of people in northern Uganda and makes out a narrative that is often hard about Africa, about how hopeless people are in times of conflict,” Kagumire said of the Kony 2012 video. “If you are showing me as voiceless, as hopeless, you have no space telling my story, you shouldn’t be telling my story.”

The absence of Ugandans, specifically, and East Africans more generally isn’t just a matter of aesthetics. It informs the content, particularly on an issue that’s as complicated and politically nuanced as that of Joseph Kony and the widespread violence that’s plagued Uganda.

“The way they present the facts and information and history of the conflict and their solution is not something that is by any means the common point of view amongst Ugandans,” says N’yong’o. “They say it’s ‘not about politics and it’s not about the economy’ [in the video], but it’s actually all about politics and the economy.”

Much of the dissent has also focused on Invisible Children’s support of U.S. military intervention—and the video’s role in stirring U.S. public outrage to spur military action.

Former LRA abductee Victor Ochen, for instance, agrees with the campaign’s point that Kony must be stopped, but warns against actions that would increase the numbers of civilian tragedies. “The stronger survivors become, the less Kony remains an issue,” Ochen wrote at the African Youth Initiative Network’s blog. “Restoration of communities devastated by Kony is a greater priority than catching or even killing him.”

At the very least, any attempts to capture Kony would put child solders at risk—which is just one reason why some Ugandans support amnesty for LRA fighters. It’s also widely understood that the LRA’s power has diminished greatly in recent years and that Kony hasn’t been in Uganda since at least 2006. U.S. military intervention would also indirectly lead to support of Ugandan President Yoweri Museveni—a man who’s been in power for 26 years, has been condemned by the International Criminal Court, and whose wife has been pushing a bill to punish homosexuality with the death penalty.

“Simplification can end up in some very dangerous water,” says Ethan Zuckerman, a researcher at the Berkman Center for Internet and Society at Harvard. “I understand the need to simplify so that people can make sense of what’s going on…but I think this is one of those cases where what seems like simplification to get this information to spread may actually have some really tough political implications.”

“When you don’t know anything about a situation, it’s easy to project a familiar scenario. People talk about the ‘white savior complex’ and it sounds like that’s a metaphor, but in fact there’s been a lot of literal right wing Christian evangelism in the region,” says Nyong’o “There’s this idea of rescuing the helpless African which goes back to 19th century missionary complex.”

Nyong’o says that it’s fine to be motivated by one’s religious beliefs, but that problems arise when those beliefs are manipulated to a point of obscuring the complexity of a problem. Indeed, the region’s anti-gay zealotry has been funded by influential U.S.-based right wing churches.

The white savior complex isn’t just a familiar narrative—it’s a lucrative one.

Since at least 2006, Invisible Children has received donations from a host of Christian evangelical groups with strong anti-gay platforms in both the United States and Uganda. B.E. Wilson at Alternet took a look at the group’s tax information and found that the National Christian Foundation donated $100,000 to Invisible Children in 2008—the same year that it gave similar amounts to rabidly anti-gay and anti-choice groups including Focus on the Family, the Discovery Institute and the Family Research Institute, which was labeled a “hate group” by the Southern Poverty Law Center. The National Christian Foundation says on its website that its primary goal is to “enable followers of Christ to give wisely to His Kingdom.”

In 2006, Invisible Children received a $30,000 cash donation from the Christian Community Foundation, Inc., a group who shares many of the same board members as the National Christian Foundation. What does all this mean? B.E. Wilson writes:

“From its first calendar year, Invisible Children had appeared on the radar screen of some of the world’s largest Christian fundamentalist grant-making organizations—which apparently deemed Invisible Children to be a worthy investment that would help advance particular visions for establishing God’s kingdom on Earth.”

Invisible Children’s last financial statement shows that it received $10.3 million in donations during the 2010-2011 fiscal year. While the group says on its website that 100 percent of contributions go directly to advocacy, financial statements show that 32 percent of Invisible Children’s expenses go to salaries, travel expenses and film production.

It’s unclear how much money Invisible Children has raised so far through its Kony 2012 campaign, but the campaign’s notoriety brings up relevant questions for organizers working for social justice in the U.S.

“I think there are some big questions that a lot of people are still struggling with about what is the connection between making an idea go viral, and actually leveraging it for change,” says Reinsborough of Smartmeme.

So how can people in the U.S. get involved in meaningful ways? One place to start, says Nyong’o at NYU, is to learn more about the conflict from a variety of African voices who have been working in the region. He also warns that making Joseph Kony a celebrity isn’t a quick fix.

“Rihanna may not have heard of Joseph Kony, but people in Uganda and the Congo and Sudan know who he is,” Nyong’o says. “It’s not clear to me that enhancing his fame does anything really except to further” his reign of terror.