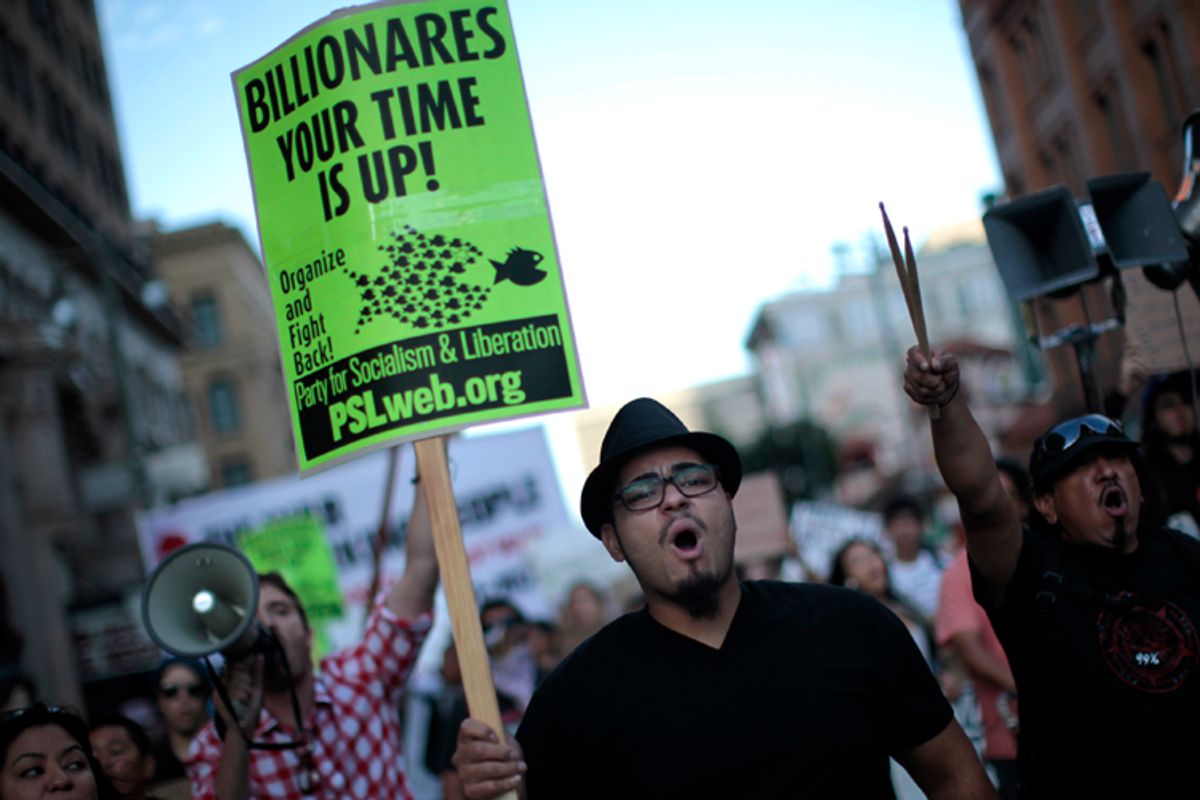 Goldman Sachs is having a bad PR moment. Very bad. And you can bet that the investment banking giant is right now tapping its vast resources to counter the tide. The frenzy centers on an entry and an exit.

Exiting: Greg Smith, executive director of Goldman Sachs’ U.S. equity derivatives business in Europe, the Middle East and Africa, who has resigned in protest of the company’s culture of toxic greed and published his reasons in a New York Times op-ed.

Which will speak louder? The answer will serve as a barometer to how far America has come in challenging a destructive financial system.

Back in 2009, Rolling Stone’s Matt Taibbi launched the key media indictment of the mega bank’s excesses, famously dubbing the firm a “blood-sucking vampire squid.” Taibbi unsparingly detailed the vast economic and political power of Goldman and its history of destructive market manipulation that helped devastate the world economy in the 2008 financial crisis.

Taibbi’s story involved some of the most influential men in recent U.S. history, including Hank Paulson, Robert Rubin, and other members of a privileged fraternity of Goldman-affiliated players whom he called out as political puppeteers working on behalf of a corrupt financial industry. It was a tale of greed triumphing over democracy. Goldman Sachs was the predator, and we the people, our money sucked away in a “giant pump-and-dump scam,” were the broke and bewildered prey.

Taibbi was vilified by many members of the press for his audacity, and it wasn’t just the conservative press that pounced. Tim Fernholtz accused Taibbi of lying and called the piece a “conspiracy theorist's dream” in the liberal American Prospect.

A few voices came to Taibbi’s defense, including economist Rob Johnson, who published his reaction on a blog I edited at that time. Johnson pointed out that Taibbi’s article would “surely be discounted by some as hysterical or exaggerated, particularly by those whose senses are deadened by the business press or CNBC-style babble.” But Johnson felt that Taibbi’s outrage was more than justified:

“He is screaming in a way that a healthy press would do in a hysterical time. Goldman Sachs’ uncontested success blurring the boundaries between market and state is symbolic of a tremendous malfunction in finance, politics and civil society.”

The Goldman apologists might dismiss Taibbi as hysterical. But it was a little harder to wave away the condemnation that appeared in the New York Times this week from a man who had worked at the firm for 12 years before quitting because he could no longer tolerate what he described as a culture as “toxic and destructive as I have ever seen it.”

Greg Smith came to Goldman as a college intern and over the years has helped recruit students to join the firm. But after 12 years, he found himself working for a company that had become so blinded with greed that its clients were no longer there to be served, but to be duped, profited from, and disparaged. Smith wrote:

“It makes me ill how callously people talk about ripping their clients off. Over the last 12 months I have seen five different managing directors refer to their own clients as ‘muppets,’ sometimes in internal e-mails.”

Regardless of the legality of Goldman’s activities, Smith found the absence of integrity and the single-minded focus on pushing potentially harmful investments on clients to be destructive and repellent: “I truly believe that this decline in the firm’s moral fiber represents the single most serious threat to its long-run survival.”

This announcement came on the heels of a report from none other than Matt Taibbi that Goldman Sachs had just hired a man as global head of mortgage trading whose background is as shady as it is outrageous. Jeffrey Verschleiser, a former Bear Stearns executive, was already making the news back in January, when he bought out a popular Aspen hotel and shelled out $500k to $1 million for his daughter’s bat mitzvah party. The community was disgusted, particularly as this same man had been named in a lawsuit against Bear Stearns that claims the company took millions of dollars from clients in the name of profits and bonuses. Teri Buhl, who broke the story for the Atlantic, named Verschleiser as a key figure in a scheme among Bear traders to sell toxic mortgage securities to investors and then sell back the bad loans with early payment defaults to the banks that originated them at a discount. “The traders would pocket the refund, and would not pass it on to the mortgage trust, which was where it should have gone to be distributed to the investors who owned the bonds.” In other words, Verschleiser and his pals were getting paid twice on the same deal, what’s known as “double-dipping.” The Bear traders cynically referred to these crappy bond mortgages as “sack-of-shit” bonds.

Verschleiser was hired by Goldman Sachs. Two days later, Smith released his op-ed in the Times, which pointed to a “toxic leadership culture” as one of the key problems at the bank.

The vampire squid froze for a moment in horror. And then a tsunami of attacks on Smith and defenses of Goldman covered the media. Within 24 hours, the following stories appeared:

“Smith is not the first person who wants to tell his former bosses to shove it. He is also not a whistleblower. He remained happily employed at Goldman after it took a massive taxpayer bailout.”

“Smith might think that Goldman is undergoing a 'decline in the firm’s moral fiber,' but MBA students are still clamoring to get in the door of the investment bank.”

Read: Who cares about morality when you can make $$?

Yes, Mr. Smith, Goldman Sachs Is All About Making Money (The Editors, Bloomberg)

Read: Goldman Sachs doesn’t have to serve society. How cool is that?

“It’s much easier to see the disgruntled ex-employee here, quitting in a huff, than it is to see someone genuinely trying to do his part to reconstitute the Goldman Sachs of Gus Levy and John Whitehead ... The most remunerative skill, at Goldman, is the ability to flatter someone into believing that they’re incredibly important and clever and sophisticated, even as you’re getting that person to do exactly what’s in your own best interest.”

Read: Fiduciary duty is for suckers. Not for blood-sucking vampire squids.

One of the most memorable spectacles of the Occupy movement was a mock trial held in Zuccotti Park in which philosopher Cornel West and journalist Chris Hedges teamed up with people directly impacted by Goldman Sachs’ destructive policies to publicly accuse the firm of crimes against society. “The People v. Goldman Sachs” concluded with a verdict that found the bank guilty of felony fraud and a demand, among other things, of the return of billions looted from the U.S. Treasury.

Now, perhaps, is the moment for a broader public trial.

Paul Volcker has praised the Smith op-ed and denounced the conflicts of interest rampant in the industry. The blogosphere is ablaze with commentary testifying to widespread anger at the firm and all it represents, including Mike Lux’s piece in the Huffington Post, which includes a petition demanding that Mitt Romney lead the charge for Lloyd Blankfein’s resignation. Web satirists are having a field day -- a parody popped up on the Daily Mash website in which Darth Vader resigns from the Empire, unable to swallow its unethical behavior.

Most upsetting for Blankfein, I'll wager, is that money talks. The company’s shares have already taken a steep dive, evaporating $2.15 billion of its market value.

Hard to say where this will all end. The vampire squid has lost a tentacle, but it knows how to grow three more in its place. Unless, of course, it finds that unmitigated greed and corruption don't pay quite as well as they used to. At water coolers, dinner tables, classrooms and newsrooms across the country, the people will be asking, how have we allowed this predator to exist in our midst? And some very wealthy clients will be asking, why the hell are we giving this thing our money?