How not to stage an Occupy music festival 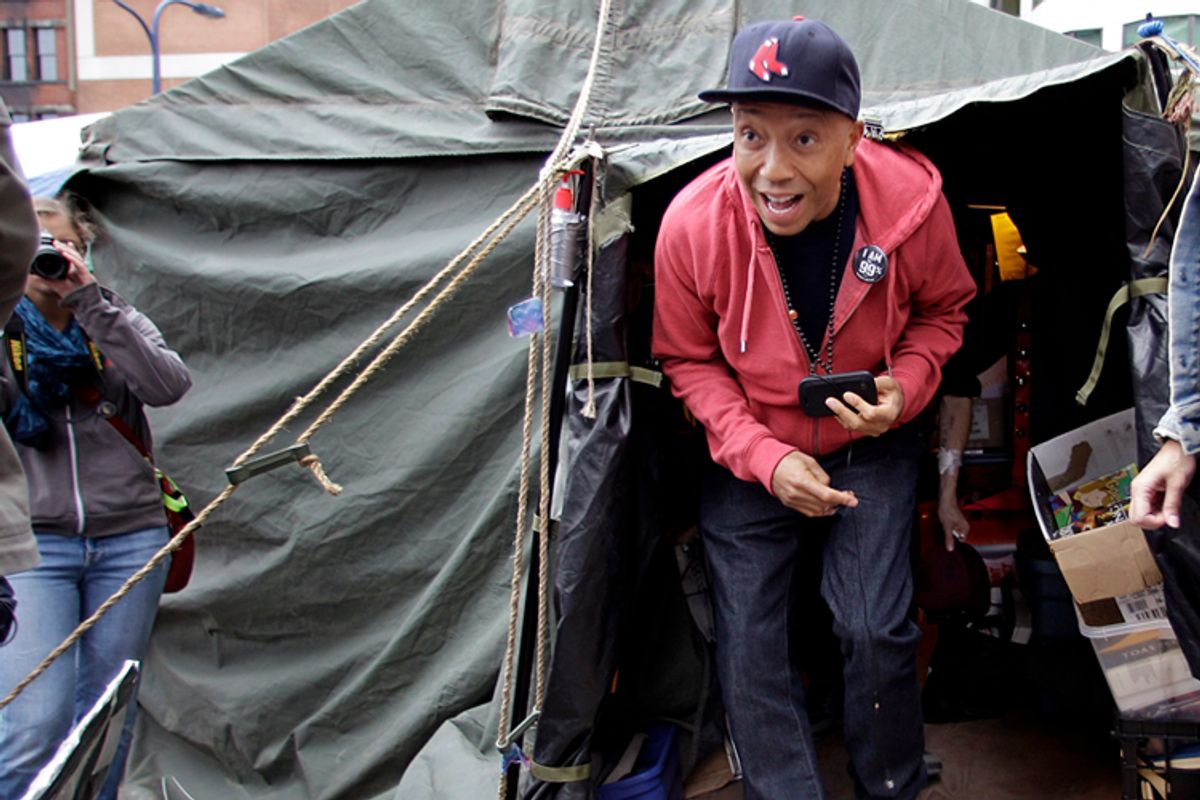 Hip-hop mogul Russell Simmons, seen here at Occupy Boston, is co-hosting an arts festival called "All in for the 99%" (AP/Stephan Savoia)
--

There's nothing wrong with standing in a park listening to music with lots of other people. As such, there's nothing essentially wrong with Occupy Festival -- a two-day music festival in Chicago's Union Park in mid-May. But essence aside, there's reason to be wary.

The two-day open-air festival, planned for May 12-13 (purposefully, just in advance of Chicago's NATO summit), is being organized autonomously by a group called Solid Clarity LLC, but won the endorsement of Occupy Chicago. Yet-unnamed "top international, national and local" musicians are slated to play across three stages. Half the profits will go to Occupy Chicago -- who will get the rest isn't clear.

Festival organizers made an embarrassing early move (aside from using cringe-inducing phrases like "music - the heartbeat of our cultures"). They advertised VIP passes, with access to a private lounge, special viewing areas and more. An Occupy event with VIP tickets: The idea is truly laughable. Evidently, public responses made this more than clear. Just over a day after the VIP passes were announced in a press release, they were scrapped.

"There is no VIP or premium access ... That was an oversight that was pretty big," Grahan Czach, an organizer with Solid Clarity LLC, told RedEye Chicago.

However, that the idea was floated in the first place suggests that those behind Occupy Festival might not be familiar with the horizontalism underpinning Occupy organizing, despite Czach's claim that they are "part of the movement." It's worth noting that standard-price tickets are already $35 for one day, $55 for two, which will exclude many Occupy supporters anyway.

At best, the festival is a fundraiser, which will push some much-needed funds to Occupy Chicago (hopefully without strings attached). At worst, it is the sort of event that co-opts energy and anger and pacifies, rather than stokes, challenges and threats to the status quo. No one needs another WOMAD festival, and I fail to see how Occupy Festival's permits, strict rules, elevated stages and pricey tickets have much to do with Occupy at all. I also fail to see how a music festival can “peacefully embody the struggle of social and economic inequality,” as Occupy Festival promises to do – a complex challenge indeed.

As Occupy brushes off its winter dust and springs back into regular, highly public action, the many-legged co-optation machine will follow suit. Another cultural event at the end of March, for example, will see the language popularized by Occupy funneled into a distinctly liberal cause. “All in for the 99%” is an arts event hosted by hip-hop producer Russell Simmons and former White House environmental advisor Van Jones, and sponsored by MoveOn Civic Action, SEIU, Rebuild the Dream – a nonprofit focused on economic inequality. Ed Norton, Marisa Tomei, Moby and other big names are on the host committee for the Los Angeles event, which will feature curated DJ sets alongside community activist training sessions.

“Artists, musicians, writers and activists will gather and use creative collaboration to amplify the voices of the 99%, demanding an end to Citizens United and calling loudly for real campaign finance reform,” announced the event release (noting too that the day is pretty much free and open to the public, save for a private party at the end for more important members of the public). It's more of the same sort of non-threatening consciousness raising -- celebrity endorsement included -- reminiscent of the weakest antiwar and environmental activism in recent decades.

The amorphous, confusing assemblage that loosely constitutes the Occupy movement did not resonate just because it raised awareness. All across the country -- in unpermitted marches, occupations and short-lived squat attempts -- people re-appropriated spaces, determined their use and found each other. It’s a false proposition that “the voices of the 99%” could be amplified by celebrity artists and musicians. These voices were heard most loudly when they autonomously took space, got arrested and beaten for it, and came back again and again.

Correction: An earlier version of this story stated that a portion of proceeds from Occupy Festival would go to The 8th Day Center for Justice. In fact, this group is just the fiscal sponsor for Occupy Chicago.