"Why did they not stop the killings?"

Afghan villagers ask why a three-hour rampage was allowed to happen without any response from a U.S. base 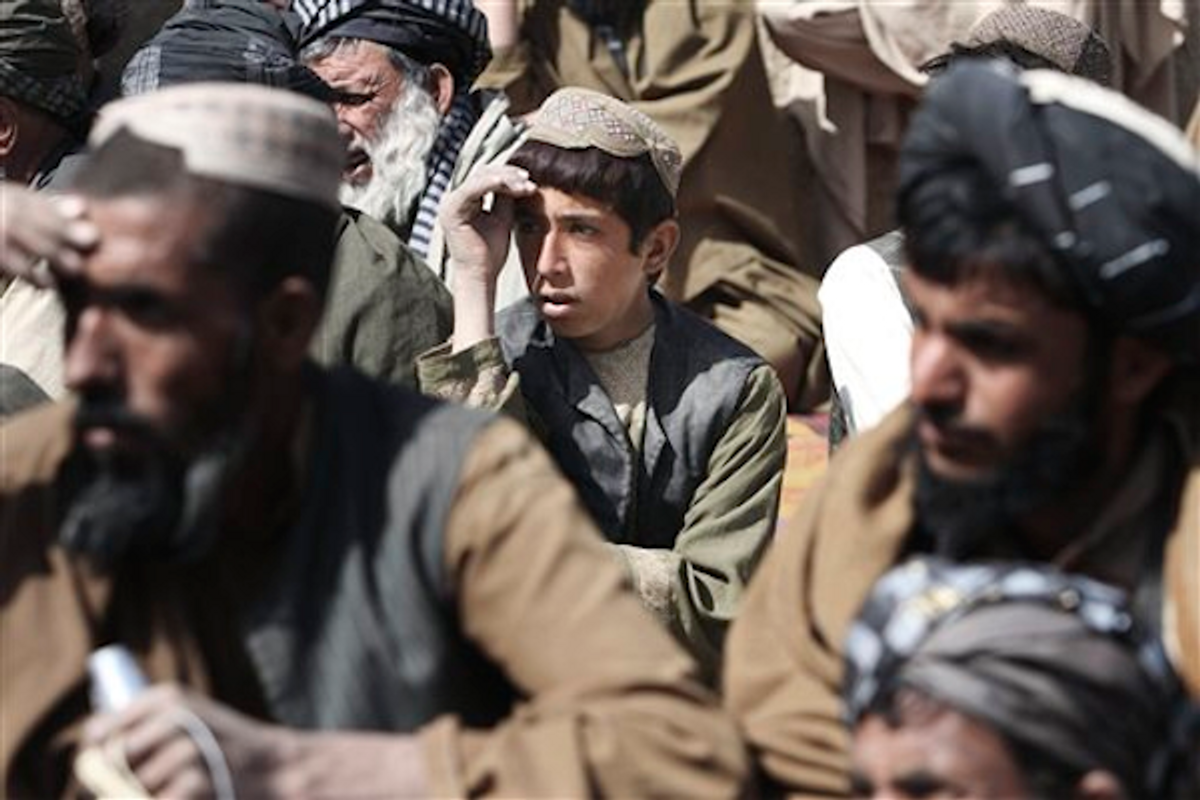 ZANGIABAD, Afghanistan — Along the road to Zangiabad, where a U.S. soldier on Sunday murdered 16 innocent Afghans, including nine children, one destroyed village follows another.

There is very little life around here. Most houses have been leveled and paths show the blackened remains of exploded roadside bombs. Here and there a burnt-out car reminds you of the many suicide attacks.

The little life there is travels inside the heavily armed American military convoys that thunder up and down the road. Here, these convoys are king.

After the much-vaunted surge in 2010, the Americans turned Zangiabad — like so many other towns in southern Afghanistan — into a heavily militarized zone. Soldiers set up checkpoints every mile, along with a smattering of bases, in what is largely a deserted area. Three white security balloons with cameras record every movement across the town, which is nestled between two branches of the main river in Kandahar Province.

It is in this atmosphere that the U.S. soldier managed to exit Camp Belambay, the local military base, and for three hours walk from house to house in the quiet of night opening fire on residents.

Bothered by nobody, he entered at least three different houses — spread over two neighborhoods. In one house, he piled eleven bodies together and set them on fire, according to accounts from villagers interviewed by GlobalPost.

Having recovered from the initial shock, the victims’ families and friends are now wondering how it’s possible that the massacre went on for as long as it did without any reaction from U.S. military personnel still inside the nearby base.

As the rumors and conspiracy theories fly, anger among the locals is seething. Witnesses speaking to GlobalPost on the edge of Zangiabad warned that it is now too dangerous here for a westerner. Villagers, they say, are too emotional and too full of hatred toward the Americans.

Camp Belambay is located in the center of the town. Another military base, where both Afghan and American soldiers are posted, sits only a few miles away. But no one, from either compound, responded to the shooting spree.

For Haji Nuur Mohammed, 60, it’s simply too difficult to believe that no military personnel noticed the massacre as it evolved on Sunday night.

The rampaging soldier must have walked by Mohammed’s house. His mud compound sits in between two of the houses where people were killed. It is a thought that for a moment makes him stare at his wrinkled hands.

“The shooting echoed through the silent night, and was without a doubt heard by the U.S. soldiers at the camp,” Mohammed said.

Camp Belambay is barely a mile from Mohammed’s house and, especially at night, soldiers on lookout can easily see and hear everything, he said.

“Why did they not stop the killings? These soldiers at the camp spy with expensive equipment on all that happens, from the ground and from the air,” he added. “It’s too difficult to believe that one of their colleagues could get away with this.”

A spokesperson for the International Security Assistance Force, the coalition operating in Afghanistan, said an investigation was still pending, adding that it was not yet clear what the soldiers at the camp did or didn’t hear.

“Investigators are talking to people to get evidence and we simply don’t know anything yet,” Lt. Brian Badura said.

The lack of response is fueling conspiracy theories that are only worsening the impact of the massacre. Several villagers here insist the shooting was part of a broader operation.

U.S. authorities, trying to squash such rumors, showed their Afghan counterparts a video of the lone soldier surrendering at the base after the massacre, according to the Associated Press.

But Mohammed Wadi, a local farmer, said a relative who lost her husband in the shooting insisted there was more than one soldier.

“She saw a couple of soldiers in her garden after one shooter entered her room, pushed her head to the floor and shot her husband,” he said.

“The U.S. wants us to believe it’s one soldier, but the residents who were there during the night think they just want to downplay the massacre,” said Haji Akha Lalai Dastegiri, the head of the Provincial Council.

For Haji Khan Akha, a tribal elder here, the shooting was the last straw. He said the time is now up for the United States.

“Were there more soldiers involved or not? I don’t care,” he said in an interview.

Akha, together with other representatives of Zangiabad, delivered a letter to the investigation team on Tuesday that demanded the U.S. leave. If not, the villagers would, the letter said.

Haji Mehboob, an elderly resident who found three of his family members wounded after the shooting spree, signed the letter as well. He said that an apology from the United States is not enough anymore.

Mehboob said that six years ago a U.S. bombing that killed several Taliban members also killed at least 50 civilians. “They guaranteed no civilians would be killed again, but we don’t believe them any more,” he said.

Akha said there was no fixing this.

“They can invest $1 million in our area, but for who? We will be gone if they will stay. Is it worth the money to build a school for nobody?” he asked. “What can make me believe the U.S. now has the best intentions after all that has happened?”