For St. Patrick's Day, a look at David Creedon photos of homes abandoned by Irish citizens who sought a better life 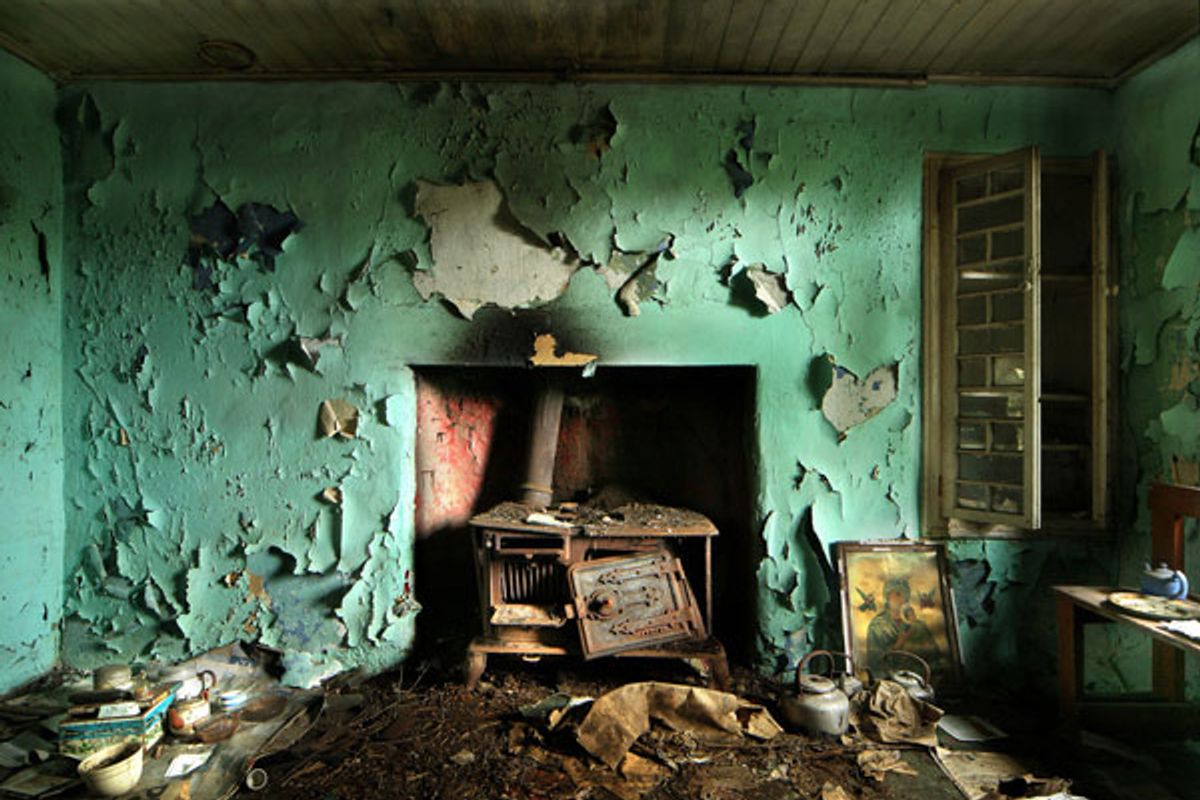 The kitchen of an abandoned house in west Cork, from David Creedon's "Ghosts of the Faithful Departed." (David Creedon)
--

David Creedon's haunting photographs of abandoned Irish emigrants' homes -- collected in the book "Ghosts of the Faithful Departed" (released in the U.S. this week by Dufour Editions) -- are all the more ghostly for their lively colors and poignant period props.

The houses to which this photographer's sensitive eye was drawn (over a period of two years) sleep in various stages of decay, with books, tools and religious icons scattered liberally across their abandoned surfaces. The agents of all this quiet chaos -- the homes' former inhabitants -- are conspicuously absent, but their lives can sometimes be pieced together, their belongings used as clues.

Over the phone, Creedon told me how a project born of serendipity (he stumbled on one remarkable abandoned home by accident, then quickly discovered many more) became an internationally exhibited endeavor, and talked about the significance of emigration to the Irish collective conscience. The following slide show offers a preview of Creedon's work (with captions in his own words).

How long did this project take you, from start to finish?

I started in about April 2005, and I spent two years working on it. When I had the first few images done, someone saw them and offered to exhibit them. We opened in Chicago in October 2006, and I think there hasn't been a month gone by since then that they haven't been exhibited somewhere in the world.

How much research do you do about each individual house?

It's very, very difficult to find individuals who are still living who know anything about the people who used to live [in these houses]. Some of these houses are really very isolated, and it was only by going through papers and letters that were lying around that I was able to get a profile of the people who once lived there.

There was a house in west Cork that I photographed; it's the one that's on the cover. The house was extremely dark, but when I went in, there were these vibrant colors in every different room. The calendar said 1978. There was a book of the American Constitution lying around, and there was also [a book about John F. Kennedy]. When I went upstairs, the American flag was hanging at a 45-degree angle on the landing, and it reminded me of that famous old photograph of the soldiers putting up the flag at Iwo Jima.

When I went into the next room, there was an old shipping trunk [with labels identifying its owner as a woman called Mary Sullivan]. Doing research, I discovered that Mary Sullivan had traveled to New York in 1940 on a White Star liner out of Queenstown. When she arrived at Ellis Island, she had $15. But when you opened up the case, inside there were ladies' nylon stockings still in their original packaging -- and there was also a bank book. Mary Sullivan had saved $8,000 while in New York. $8,000 is a lot of money still today -- but in 1949, it must have been absolutely amazing. Inside that case, there were letters from home, and there were receipts from the local church where she would have given donations, and hanging behind the door was a dress that still had the purchase labels of the shop where she bought it. I think she came home to die, actually, to be honest with you.

Have there been efforts to revitalize any of these houses?

Well, that's a question in itself. In Ireland, in the 1950s, there was mass emigration. Just to give you an idea, 80 percent of people born in Ireland between 1931 and 1941 emigrated in the 1950s. That's a huge amount. And by the middle of the 1950s, the population had fallen to 2.8 million, which was the lowest that was ever recorded. Even if you were to go back 100 years prior to that, to the 1850s, the population stood at 9 million. So this was a huge drop.

In Ireland in the 1950s, there was very high unemployment. [In certain regions,] a small rural farm couldn't support a family of five. Most of the children would emigrate; there might be one who'd stay behind, and that person would look after the farm, but in later years would end up looking after his parents. But because they had no money, the person who stayed behind couldn't afford to buy or build his own house, so he couldn't get married (no woman would ever want a second woman under the roof). So there was a huge population increase in bachelor farmers, and when they started dying off, in probably the '80s or '90s, the title of their property went to, let's say, a brother or sister in England or in America -- who, at this point, could also be dead. That's really how the properties became empty. And they just got forgotten about, you know?

They'll just fall down the way they are now. And that'll be it. Nobody will go in and take over the houses, because they don't own them. They wouldn't have title on them. Somebody somewhere owns those houses, you know. But who they are, or where they are, I don't know.

Would you say that emigration is somehow key to the Irish cultural identity?

Ireland has always been a country that emigrated. Between about 1990 and 2005 there was [very little] emigration; people were coming in, because there were jobs. And then you had the banking crisis -- so we're back emigrating again. But in reality, Ireland has always been an emigrant society -- since the [mid-19th century], if not before. We've gone to Australia, America, England -- the Irish are all over the world, really. I think it's always been part of our psyche, that emigration is an option for us. I know a lot of kids now who are at college, and all they're talking about is emigrating when they get their degree.

"Ghosts of the Faithful Departed" by David Creedon is published by The Collins Press. It is available in North America from Dufour Editions.