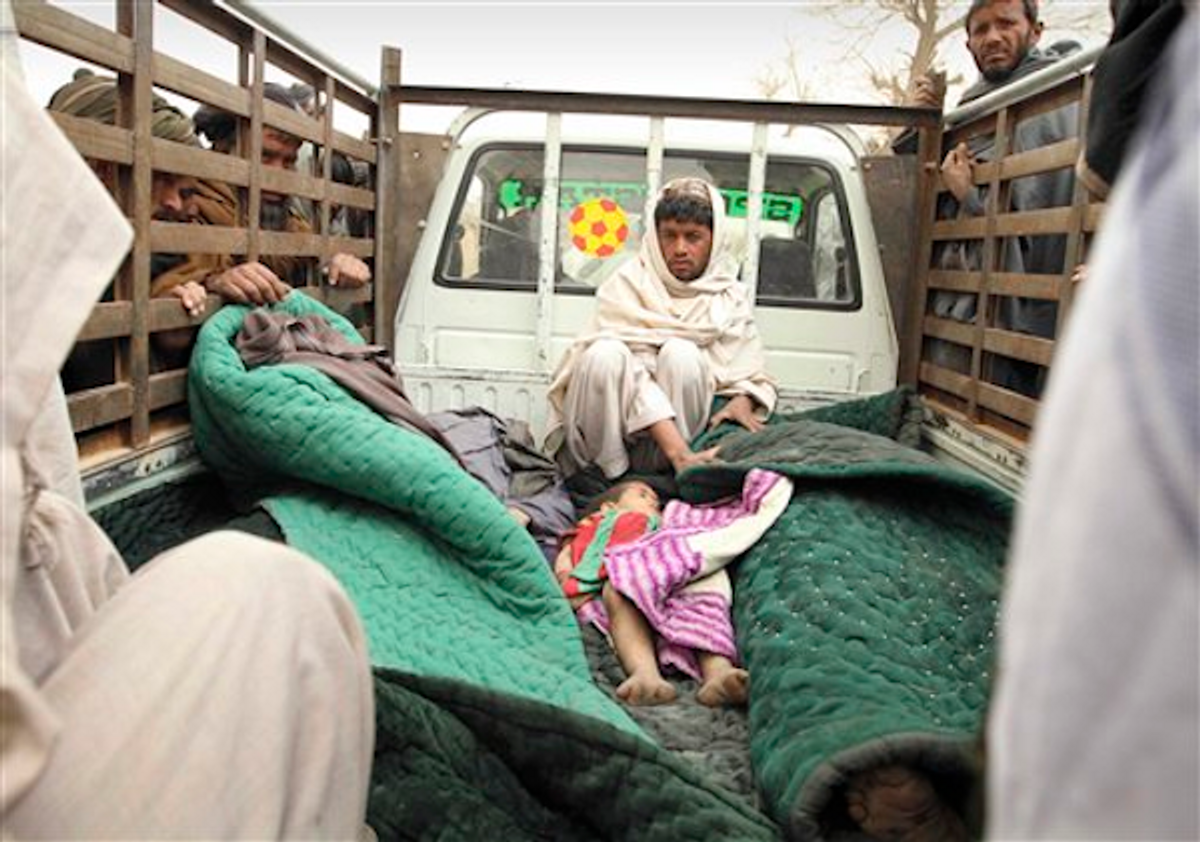 A man sits in the back of a truck with the bodies of several men and a child allegedly killed by a U.S. service member in Panjwai, Kandahar province south of Kabul, Afghanistan, Sunday, March 11, 2012 (AP Photo/Allauddin Khan)
--

The U.S. soldier accused of killing 16 Afghan civilians Sunday was drinking and stressed from a failing marriage the night he went on his alleged rampage, The New York Times reported.

Quoting an anonymous U.S. government source, The Times said the 38-year-old staff sergeant was on his fourth tour of duty.

“When it all comes out, it will be a combination of stress, alcohol and domestic issues — he just snapped,” the source said, according to The Times.

The suspect could be flown to Fort Leavenworth, Kan., after the Kuwaiti government “blew a gasket” when it learned the suspect was in the country, the official told The Times.

In Seattle, the lawyer hired to represent the solider didn't rule out post-traumatic stress as a defense in the case, but he said the soldier’s marriage was “fabulous,” The Guardian said.

John Henry Browne – whose past clients include serial killer Ted Bundy and the Barefoot Bandit, Colton Harris-Moore – said his client had just watched a colleague’s leg blown off before the killings occured in the violent Kandahar province.

“We have been informed that at this small base that he was at, somebody was gravely injured the day before the alleged incident – gravely injured – and that affected all of the soldiers,” Browne said.

The suspect’s family met with lawyers on Thursday after the military relocated them into a Washington state base for their protection.

The suspect is a father of 2 children – ages 3 and 4 – and enlisted in the military within a week of the Sept. 11 terrorist attacks.

He met his wife online, and allegations he received stressful email from her are unfounded, Browne said.

His lawyer said the man is from the American Midwest and is “highly decorated,” The Telegraph reported.

A roadside bomb attack in Iraq left the suspect with a concussion, and he had part of his foot amputated in another of his three tours there.

His family was shocked to learn doctors cleared him for duty and that he was embarking on a fourth tour, Reuters reported.

“He and his family were told that his tours in the Middle East were over,” Browne said during a press conference in Seattle. “His family was counting on him not being redeployed. Literally, overnight, that changed. So I think it would be fair to say that he and the family were not happy that he was going back.”